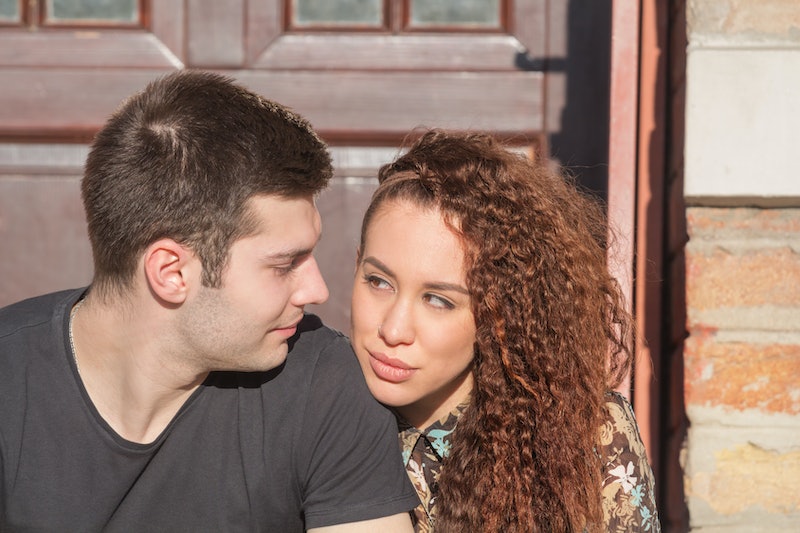 Being cheated on is a horrible feeling, but sometimes if you just think you're being cheated on, it can be just as bad. "Cheating and it's consequences are one of the most devastating moments in a relationship," relationship coach and psychic medium Melinda Carver tells Bustle. "It turns your whole world upside-down when you find out your partner is cheating, [and] you begin to look at everything in your relationship as a lie, and your self-esteem plummets."

The difficult thing is that there are few times when you get definitive proof or someone admits it. Often for a while, you just have suspicious behavior and a horrible feeling in the pit of your stomach. That doesn't mean you're over-reacting or wrong, it just means that you need to take things slow. So what do you do if you're in that position?

If you have a bad feeling, behaviors that point to something being off in your relationship, but nothing too concrete? Well, you need to tread carefully. By thinking about what you actually know and picking a time when you can keep your cool, you'll make a really horrible conversation a lot easier. It's never going to be nice, but staying calm will make it better. Here are the steps to take to confront your partner if you think they're cheating:

Know What To Look For

First off, what are the signs you're picking up on? One sign that's often obvious is when someone is being defensive or secretive with their communication. "When your partner gets off the phone and you ask, 'Who were you talking to?' and they respond with hostility like, 'Why are you always so nosy?' or 'I can’t believe you don’t trust me,'" something is up, and it's not your imagination, relationship coach and therapist Anita Chlipala tells Bustle. This is gaslighting, and it's messed up. "You may start doubting your own sanity, but if you’re getting this kind of attitude when you haven’t before, it’s highly suspicious."

But make sure you're focusing on the right things — if you just have a bad feeling or if you've been cheated on before and are prone to being suspicious, try to keep some perspective on it.

Stick To The Facts

Cheating is a very emotive thing — even if you're only in the suspecting stages. But don't try to catch them, be honest and open. "Don’t set a truth trap, trying to get him or her to confess," Chlipala tells Bustle. "Be direct about what evidence you found of their cheating."

If you try to trap them, it's just going to make everything more confusing. Being direct about what you actually know and what you think is best. Wait until you're in a head space that means you can do it in a calm, collected way and then approach them.

Give It Over To Them

Once you air your concerns and why you have them, it's their turn. What will happen will vary based on a lot of factors — if it's true or not, how you approached it, your partner's personality, and more. But you have to wait and see what they say. If they deny it, you may need to trust them and see where it goes from there. There's a difference between suspecting cheating and having actual proof. Just suspecting is a really difficult position and you have to do your best to stay open.

If You're Right, Know What You Want Next

If they are cheating? Well, then you've got some thinking to do. "Cheating in a relationship requires an honest assessment of the relationship in order to figure out a next move," New York–based relationship expert and author April Masini tells Bustle. "If the cheating happens within the first couple of months of dating, it’s not really cheating — it’s playing the field," Fair enough. Although if you've established that you're exclusive it's obviously not OK.

"[If] it happens in year 10 of a 10-year marriage with children, there’s a lot at stake and walking away should be a last resort — unless this isn’t the first time that the cheating has occurred. Cheating doesn’t happen in a vacuum, and it’s crucial to be honest about your part in the relationship... It’s easy to play victim, but more often than not, the cheating happened because the cheater felt neglected or mistreated or not valued. That doesn’t excuse that person’s behavior, but it explains it, and it shows that the cheating was a symptom, not the main problem."

But even if there were some problems in a relationship before they cheated, that doesn't mean you have to stay with them. The most important thing is that you do what's right for you — and that starts by having an open, direct conversation with your partner about what you think is going on. Explain your point of view, stick to the facts, and you'll be in the best starting point for a difficult conversation.