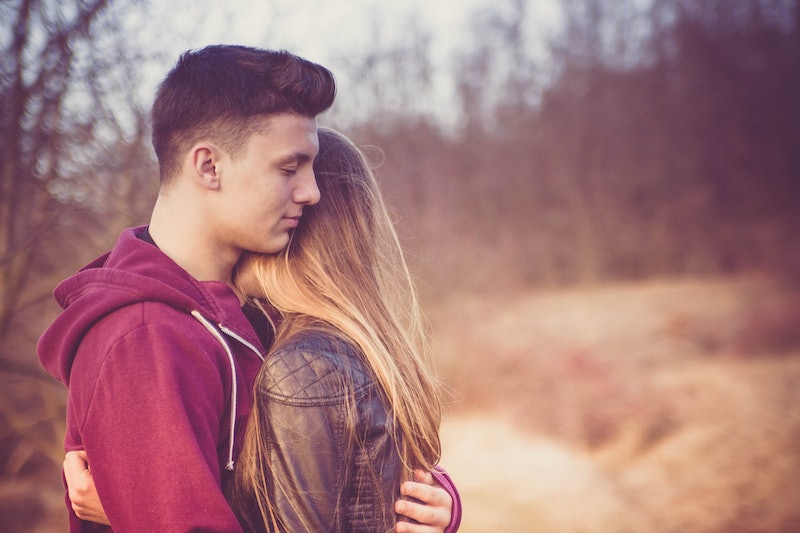 Cheating: Ugh, ugh, ugh. The worst thing in the world is to wonder if your partner is a cheater — and if you're wondering, you're probably looking for signs that he or she is cheating. Trying to seek out these clues is pretty much the second worst thing in the world, because no one wants to be doing recon on their partner, and even fewer of us want to feel as though we don't trust our partners enough to even go down this dark rabbit hole of doubt. But if you're in a relationship that is feeling unhealthy, and you're wondering if your partner has a straying eye, it's not a good idea to just hope things change sooner rather than later. They won't, and you'll only wind up more miserable.

That said, sometimes people can be unnecessarily suspicious of their partners, and that's not fair. Especially if you've been cheated on in the past, I think it can be hard to lay down your fears and let go of ancient PTSD, but in the long run that will only cause serious problems. Accusing someone of cheating is a serious thing, and should only happen if you're really, really sure — not if you're feeling a tad insecure. But if you think your inkling is real, here are 11 ways to tell if your partner is cheating.

Normal questions are met with hostility and paranoia: Yeah, something probably isn't right. "When your partner gets off the phone and you ask, 'Who were you talking to?' and they respond with hostility like, 'Why are you always so nosy?' or 'I can’t believe you don’t trust me,'" something is up, and it's not your imagination, relationship coach and therapist Anita Chlipala tells Bustle. This is gaslighting, and it's messed up. "You may start doubting your own sanity, but if you’re getting this kind of attitude when you haven’t before, it’s highly suspicious," she says. If your gut is telling you that something is off, pay attention and bring it up — stat.

2. Something Is Different About Their Phone

It doesn't have to be that they're on it all the time, but if something feels different about your partner's phone use, uh oh. "If you notice a change in phone habits — like suddenly on silent all the time," that's not a good sign, Marina Sbrochi, IPPY award-winning author of Stop Looking for a Husband: Find the Love of Your Life tells Bustle. Or if their phone goes off but they never answer if you're there. Not picking up calls when you are around and not letting the phone out of their eyesight are both red flags, she says. "Basically, if how your partner deals with the phone has changed, something is probably up." She echoes my sentiment, saying, "Why not ask?" Why not, indeed.

Yet another way to tell your partner is cheating related to their phone: "If they are making calls and text messages at all hours, something isn't right," Stefanie Safran, Chicago's "Introductionista" and founder of Stef and the City, tells Bustle. But are you surprised? We transact just about everything from our phones these days — if you were cheating, wouldn't it be all over your phone? Or extra phone? Or phone usage?

4. They're Always On Their Phone

One more bad phone-related sign: "One clue is that their cell phone will be glued to their hands and their text and call history will always be clean," relationship coach Chris Armstrong tells Bustle. "Same with erasing the cookies (web browsing history) from their computer." If things seem too clean, they probably are. "When someone is cheating on their partner, erasing all of the breadcrumbs becomes priority one, largely because cheaters have a guilty conscious and a nervous mind," Armstrong says. Yeah, if your partner's history is clean, that's weird. But why are you snooping around your partner's computer?? Talk to them — don't snoop. Snooping will never, ever help anything.

5. They're Lying About Other Things

"If you catch your partner in one hurtful lie, chances are that's not the only one," life coach Kali Rogers tells Bustle. "Each couple can create their own rules for privacy, so having a locked phone or a password protected computer doesn't signify anything." Again, being paranoid about your partner cheating will do exactly no one any good. "But lying tends to be a compulsion — and those who lie tend to limit it to just one," she says. "So if your partner is habitually keeping things from you, cheating could easily be one of them." If you're not part of your partner's daily life, it's time for a real talk.

6. Your Sex Life Has Changed (For The Better)

If you're having more sex, beware, Chlipala tells Bustle. "People think that if they’re getting it from the side, they’re not as concerned about getting it at home. This isn’t always the case. Sometimes an affair causes the cheating partner to have more passion and energy for their relationship." So if things have been pretty slow, and now they're heating up, that's not necessarily a good thing. "Be aware if your partner starts asking for new techniques in the bedroom," she says.

7. You Have An Itch To Make Your Partner Jealous

"I've found that when I've been in a relationship and he wanted out (but hadn't yet mustered up the courage to let me go) that I noticed within me a desire to make him jealous," psychologist, author and speaker Karin Anderson Abrell tells Bustle. "In retrospect, I can see that as he was deliberating about whether or not to end the relationship, he was subtly pulling back in ways I sensed but couldn't put a finger on." Her reaction was to be extra flirty, but she didn't even know why.

"My response was to try to elicit a reaction from him by being flirty with other guys which would, I hoped, allay my concerns and resuscitate the closeness I feared was dissipating. Again, none of this was clear to me at the time. In fact, I remember thinking to myself, Wow, that's weird that you're being flirtatious in front of Dylan. You never do that type of thing! But in hindsight, I realize my behavior stemmed from part of me (but not the conscious part) recognizing my relationship was on shaky ground." If you're putting on extra makeup or being super flirty, put the kibosh on it and talk to your partner.

"The biggest clue that a person is cheating is sudden behavior changes," BetterHelp telehealth counselor and psychologist Nikki Martinez tells Bustle. "Whether they are showering you with gifts, and have never done that before, or they are picking fights, which is out of their character," when there's a behavior change, that's not good. "Often the person who is cheating will accuse the other person of doing it, as they are projecting their own guilt onto their partner," she says. "Another clue is when they are less and less available, and suddenly have all these new interests that take them away from the time that they used to spend with you." If none of the above are true, but they are "pulling back from you sexually, and there is an air of guilt when it comes to these interactions," that's not great either. Of course, none of these mean you're being cheated on, but it could be a clue that something is going on.

9. Your Partner Is Withdrawn

Even if they're there, they're not there — know what I mean? When your partner is emotionally and physically absent, they're stepping away from you, Chlipala tells Bustle. "Having an affair, whether emotional, physical or both, takes time. If all of a sudden your partner starts visiting their mother more, or goes straight to the bedroom after work instead of having your usual chat, that could indicate their attention is elsewhere." Bring it up before it's too late. "You want to look for a change in routine from the norm, especially if your partner is spending less time with you." And if that's the case, don't brush it under the rug.

"Emotional distance is a great indicator of infidelity," dating expert Noah Van Hochman tells Bustle, elaborating on Chlipala's thoughts. "Time and fatigue can be causes of a cooling off in a relationship, but emotional distance usually occurs when someone has for the time being checked out of the relationship in one form or another." And that is never good. "This emotional distance is not usually the result of the cheating itself but more from the guilt of cheating, and perhaps even self-respect issues for their actions. Remember, cheating is the act, not the cause." Bring it up!

11. They Start Going Through More Trouble To Look Good

When your partner suddenly starts taking better care of themselves physically, that may be a sign, relationship coach and psychic medium Cindi Sansone-Braff, author of Why Good People Can't Leave Bad Relationships , tells Bustle. "For instance: your girlfriend, who never shaves her legs, starts shaving her legs everyday; or your boyfriend starts working out like he expects to win a gold medal at the summer Olympics." If either of these things are happening, now is the time to nip things in the bud and have a talk. "If you notice that your partner is going to a lot more trouble to look good before walking out the door, then it might be time to ask him or her, 'Who are you trying to impress?'" Hint: It should be you!