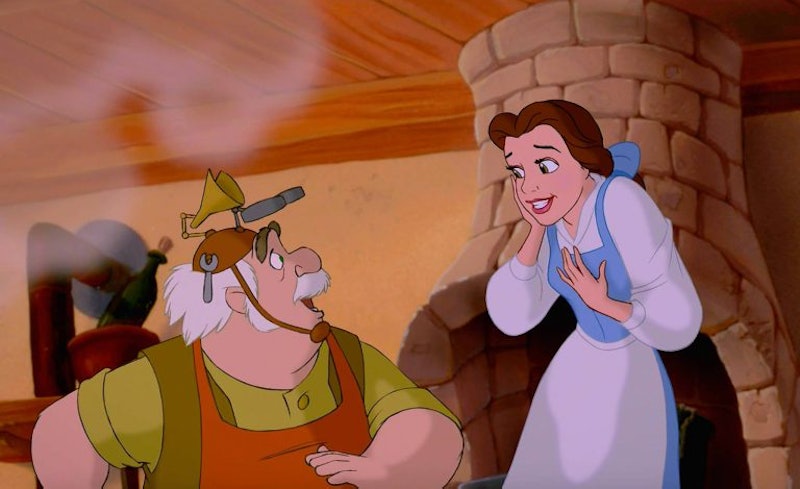 As Disney's animated classic Beauty and The Beast showed us, Belle's book-a-day reading habit didn't make her any friends, and it certainly didn't pay the bills. Did she even have a job? Emma Watson, who plays Belle in the live-action version of Beauty and the Beast, wondered the same thing and felt like the world needed an answer as to why it was Belle was hated so much for her reading. And, no surprise, her solution to this plot problem is as feminist as she is. As the actress told Entertainment Weekly, the reason Belle has so much time on her hands is because she created a way to make working easier: Watson's Belle is an inventor in Beauty and the Beast.

As Watson pointed out to EW, it was Belle's father Maurice who was the inventor in the animated version so she just "co-opted" that idea for her take on the character. “I was like, ‘Well, there was never very much information or detail at the beginning of the story as to why Belle didn’t fit in, other than she liked books. Also what is she doing with her time?’" the actress said. "So, we created a backstory for her, which was that she had invented a kind of washing machine, so that, instead of doing laundry, she could sit and use that time to read instead."

It's a small change to the story, but it's one that could have a huge effect on little girls who have been idolizing this character since 1991.

Most of the time, it was for her fashion sense, but now Belle could actually spark a newfound interest in science and technology. She could encourage a whole generation of young girls to follow their dreams all the way into a STEM field, which would be a very good thing. A 2011 report by the Department of Commerce called Women In STEM: A Gender Gap to Innovation found that women make up only 24 percent of the STEM workforce. Sure, Belle isn't a real women, but role models in science, even fictional ones, can help boost a young girl's confidence.

Belle being an inventor shows little girls that there are women just like them doing these kind of jobs and lets them know that they can do it when they grow up too. And Belle doesn't have to encourage a lifelong commitment to becoming a scientist to help young women. (Though, the White House found that women in STEM jobs earn 33 percent more than those in non-STEM occupations and experience a smaller wage gap relative to men, so it wouldn't be a bad thing.) As PBS pointed out, just building a basic interest in STEM helps young girls understand how things work and helps them "plan, cooperate, communicate, problem solve, and apply their creativity" — skills that will be beneficial to young girls in any profession.

But to make Belle a true science hero for young girls, Disney needs to rethink the merchandising of this new movie. Instead of just dolls, action figures, and dresses with Belle's face on it, why not throw Watson-as-Belle's face on science kits that teach girls how to put things together on their own? Using Belle to advertise games that would stimulate imaginations and engineering activity in girls worldwide, creating a line of science-driven books for little girls to read that show Belle explaining how things work, or putting out a series of biographies that celebrate real female scientists who are changing the world would all be great ways of bringing Belle's new profession to life for children.

As you can see, Belle's career change is full of possibility — just like the little futures she is changing.