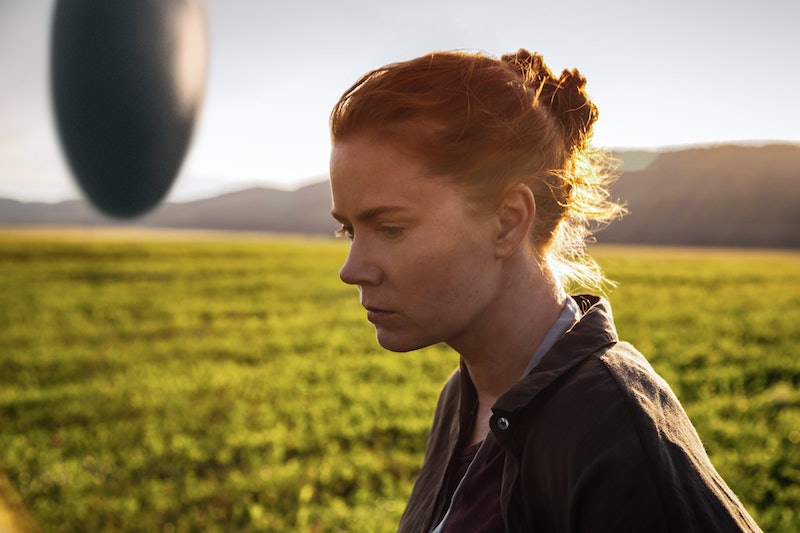 Among a slate of outstanding new fall films, the eye-catching Arrival stands out. With Amy Adams, Jeremy Renner, and at least one explosion, the movie has the big name, big budget appeal of a blockbuster. But it's directed by the artful Denis Villanueve, who is known for infusing his work with strong moods and thoughtful, powerful character studies (see: Sicario, Prisoners, and Incendies), and it's being talked up by critics for its intellectual and committed approach to "hard" science fiction, which many fans feel is rare these days as studios tend to oversimplify sci-fi premises. Beyond rave reviews, the film also has some serious sci-fi bona fides: Arrival is based off an award-winning sci-fi story written by one of the genre's hardest working geniuses.

Ted Chiang is that genius, and Arrival is based off of his acclaimed 1998 story, "The Story of Your Life," about a woman who is tasked with decoding an elaborate alien language. Its plot is much more complex, emotional, and thought-provoking than just that description, but it's also super spoiler-y, and Arrival looks like the type of movie viewers should go into full of as little knowledge and as much curiosity as possible.

And Chiang is hugely accomplished beyond that one story. Known for dedicating extensive thought, research, and time to each highly original story — a fantastic feature and interview in Electric Literature notes that despite working consistently since 1989, Chiang's body of work numbers around 15 stories — the writer has earned an enormous number of honors and awards including a total of four Nebula Awards and four Hugo Awards.

Viewers taken with Arrival's (and thus "The Story of Your Life"'s) nuanced examination of language, humanity, and the nature of time should be sure to check out some of Chiang's other popular stories, including "The Tower of Babylon," "Hell is the Absence of God," "Exhalation," and "The Great Silence," which, as noted by The Wall Street Journal , was included in lauded collections The Best American Science Fiction and Fantasy and The Best American Short Stories.

And though Chiang's brilliant mind has produced some incredible stories that may seem hard to translate into a visual medium, Arrival's filmmakers did their best to retain the linguistic complexity and more challenging conceptual elements of "The Story of Your Life." Eric Heisserer, the film’s screenwriter, told Inverse that he developed visual representations of the alien language and, with designer Patrice Vermette and the rest of the team, ended up creating a dictionary of 100 completely original alien words.

As for Chiang, the author has positive things to say about Arrival's take on his story. In the Electric Literature interview, he said that "it seems like the project has managed to avoid the typical Hollywood disasters you hear about." And he told The Wall Street Journal that after viewing the movie, he's been asked by many about whether he approves. “What I told them," he said, "was that, while the screenplay departed from the story in significant ways, it retained the emotional core of the story, and if that aspect made it onto the screen intact, I’d be happy. It has, so I am.”

For sci-fi fans, it's pretty exciting to know that in 2016, even after some of cinema's more unfaithful hard sci-fi adaptations such as I Am Legend and I, Robot, it is possible to make a cerebral science fiction adaptation that both succeeds as a plot-driven blockbuster and also honors the inherent emotional and intellectual value of the original story.

More like this
'Inside Man' Was Inspired By 'Sherlock' In The Most Unexpected Way
By Catharina Cheung and Maxine Harrison
'The Distant Echo' Provides All The Clues To Solve 'Karen Pirie’s Case
By Catharina Cheung
These 25 International Horror Movies On Netflix Prove Fear Is A Universal Language
By Bustle Editors
The Most Anticipated Books Of October 2022
By K.W. Colyard
Get Even More From Bustle — Sign Up For The Newsletter