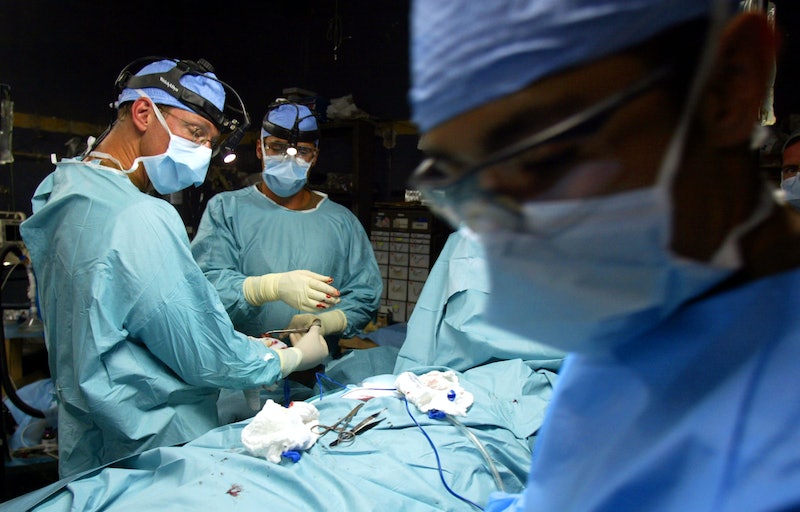 In Pittsburgh, Pennsylvania, UPMC Presbyterian Hospital is set to test a potentially new life-saving method for gunshot and knife-wound victims that sounds like science fiction: Suspending patients between life and death. Which is exactly what it sounds like. The hospital will place gunshot victims in a "suspended state" — meaning, a state between life and death — in order to save them. It's like magic, except that it's science.

For the record, it's not called "suspended animation," as one of the head hospital surgeons, Samuel Tisherman, pointed out to New Scientist, because that sounds too much like science fiction. At the moment, the hospital is only testing the method, and they'll begin later this month on 10 patients with either gunshot or knife wounds. One question: How does it work?

Well, doctors will replace the patient' blood with a cold saline solution, which lowers the body's temperature and basically stops all cell activity. The reason: At lower temperatures, the cells need less oxygen. Since gunshot and knife wounds can interrupt the flow of blood and the heart's beating — which provides oxygen to cells — minimizing the amount of oxygen the cells will need can ensure that the patient lives longer.

Once the injury is fixed by surgeons, who are performing the surgery on a patient with only saline solution in their veins, they'll re-pump blood through the system again. This will heat up the body and slowly bring it back to life. It's incredibly similar to the theory of cryogenics on humans, which proposes the idea that human bodies can be sustained for an indefinite amount of time if placed under very low temperatures.

The hospital had a hard time trying to get this study to happen, given that it's impossible for a patient or family members to give "informed consent" — since the method can only happen during an actual emergency. So the Pittsburgh hospital then advertised the proposed study, met with community groups, and allowed people to opt out online in case in the future, they ever arrived at the hospital with gun or knife wounds.

According to New Scientist, no one has opted out yet.

More like this
Michigan’s Governor Is “Going To Fight Like Hell” To Protect Abortion Access
By Andrea Zelinski
23 Abortion Funds In States With Trigger Bans To Donate To
By Emma Carey
Britney Spears & Sam Asghari Announced Their “Devastating” Pregnancy Loss
By Stephanie Topacio Long
If You Live With Migraines, You Need To Know About Cove
By Danielle Kraese
Get Even More From Bustle — Sign Up For The Newsletter