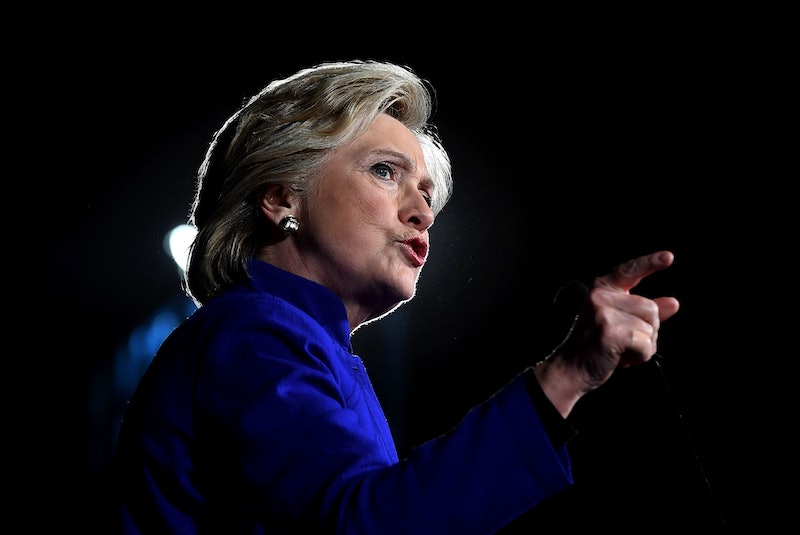 After a presidential race that could charitably be called unpredictable, it's easy to overlook one hugely (or "yugely," if you're a certain candidate) important aspect: On Tuesday night, the United States could very well elect its first woman president. If that sentence didn't already give you feminist heart palpitations, one woman's Instagram post of her mom tearing up after voting for Hillary Clinton is sure to do the trick — or at least give you a tidal wave of feelings.

Election day doesn't take place until Nov. 8, but most states offer early voting to their residents. Last week, for example, Sarah Dean drove to the polls with her mother, Vickie Wilkinson, to cast their votes in Montana. When they got back to the car, Wilkinson was so emotional about the possibility of a woman president that she teared up. "I thought it was a sweet family and friends kind of moment. I love that my mom is a feminist in her heart and I was proud to show that off," Dean tells Bustle over email.

Dean captured the moment on her phone and uploaded the clip to Instagram. In the short video, Dean asks her mother why she's crying, and Wilkinson replies, "I got to vote for a woman for president." (Warning: There are many feels ahead.)

It's a moving reminder that Donald Trump's campaign, as often as it overshadows the rest of the election, isn't the only reason this presidential race will go down in the history books. "I think we've all been so caught up in the negativity, the horror, and the embarrassment of Trump as a presidential nominee that we collectively forgot how HUGE this election is," Dean writes to Bustle. "This is American History being made."

Clinton isn't the first woman to run for president of the United States; that would be Victoria Woodhull, a suffragist and professional badass who ran for president in 1872, almost 50 years before women won the right to vote. However, this is the first time a woman candidate has received the nomination from a major political party, not to mention her lead over Trump in the weeks before the election, and Dean says that's something worth celebrating. "There will be poems and songs and books written about what we are doing right now. We are putting a woman in the most powerful office in the world. I am tearing up writing this!" she tells Bustle. "The significance can't be overstated."

Wilkinson told the Huffington Post that she became overwhelmed that morning while thinking about "how far we've come... to vote for an intelligent, qualified, viable woman" for president. Dean, however, says it's long past time for a woman to lead the United States. "Of course a woman will be president soon! It's complete nonsense that it hasn't happened already," she tells Bustle.

She adds that she and her mother never specifically discussed the chances of a woman president, but one of Wilkinson's former students reached out on Facebook with an interesting story. "One of her eighth grade students from back in the '80s ... told me that in class my mom told them she definitely believed we'd have a woman President one day, but that she believed we'd have to elect a black President first," Dean writes. "Pretty astute!"

We'll have to wait for the election results on Nov. 8 to see whether Wilkinson will turn out to be correct. In the meantime, enjoy the fact that no matter your political affiliation, this is a monumental moment in women's rights. If that doesn't make your feminist heart go pitter-patter, I don't know what will.