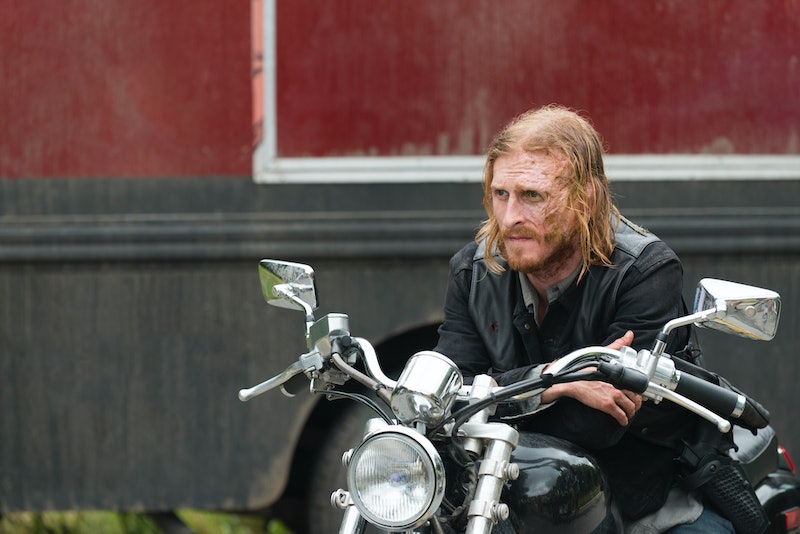 All good things must come to an end, and after a quirky week at The Kingdom on The Walking Dead, it's back to Negan for more fun with Lucille. Next week's episode is titled "The Cell," and by the looks of the promotional photo above, it looks like the show will follow Daryl — who has been kidnapped by The Saviors. However, Daryl's captors aren't all unfamiliar faces and that could be good news. For example, there's a chance that Dwight's role on The Walking Dead could lead to a revolt.

Played by Austin Amelio, Dwight first showed up in the Daryl-centric episode "Always Accountable." He is probably best remembered as the guy who stole Daryl's bike, and later showed up in a leather jacket. He was camped out in the woods with his wife Sherry, and Sherry's sister Tina. When Daryl passes out due to injuries sustained on his bike, the three tie him and up and take all of his stuff. After an encounter with some Saviors who try to get Dwight to go back with him, Daryl recruits Dwight and Sherry for Alexandria... but they mug him again.

Now, it's possible that Dwight, Sherry, and the other Saviors were conning Daryl from the start and always planned to take Daryl's bike and weapon back to Negan. The escape attempt could have been staged to gain Daryl's trust. The Saviors are all about taking resources from other survivors, after all. However, part of me wants to believe that not all of Negan's people are bad. In such a culture of fear and abuse, you would think that some of them might have second thoughts and attempt to get out.

One interesting thing about Dwight, that has nothing to do with his potential plan to Single White Female our pal Daryl, is that half of his face appears to have been burned — like a post-apocalyptic Phantom of the Opera. That burn was not there in Season 6. There's definitely a story there, and it makes me think that Dwight and Sherry really were trying to escape Negan and got caught. Amelio wouldn't be put through that amount of make-up if it wasn't significant, I hope. Doesn't it seem likely that Negan disfigured Dwight himself?

He's also the one that shot Denise with Daryl's crossbow — and Daryl blames himself, which gives these two another reason to face off against each other. Maybe he told Negan about Daryl. Maybe he requested that Daryl be taken back to Saviors HQ. After the bleak Season 7 premiere, I can't help but hope that Dwight has some tricks up his sleeves that could benefit the heroes of The Walking Dead.

More like this
The 'Teen Wolf' Creator Revealed If 'Wolf Pack' Takes Place In The Same Universe
By Grace Wehniainen
'Succession' Season 4 Will Be An "Absolute Banger" According To Cousin Greg
By Bustle Staff
All The ’70s Easter Eggs You Missed In 'That ’90s Show'
By Grace Wehniainen
The 'Gossip Girl' Reboot Creator Is “Looking For A New Home” To Air A Potential Season 3
By Brad Witter
Get Even More From Bustle — Sign Up For The Newsletter
From hair trends to relationship advice, our daily newsletter has everything you need to sound like a person who’s on TikTok, even if you aren’t.