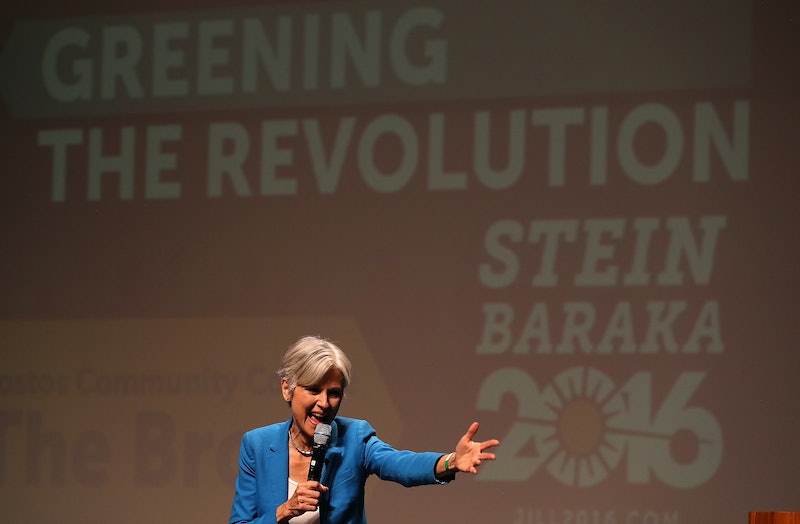 In the battle for millennial votes, many projections and anxieties, including those of the Democratic party itself, seemed to point to all-time high levels of partisan dissatisfaction among those 30 and under. Some of them loved Bernie Sanders, hated Donald Trump, and hated Hillary Clinton almost as much. What's left, besides the nihilistic or political choice to not vote, was to vote Third Party — either for Gary Johnson on the Libertarian ticket or Jill Stein with the Green Party. As the dust of this stranger-than-fiction election settles, many are wondering how many millennials voted for Third Party candidates, an important question that predicates the more important question regarding why they chose to leave the partisan system behind.

As final results come in, initial demographic breakdowns show that eight percent of millennials between the ages of 18 and 29 voted for either Johnson or Stein, though other lesser-known alternative candidates, such as Gloria LaRiva of the Party of Socialism and Liberation, were nominated by their respective parties. There were also dozens of write-in candidates for president who filed with the Federal Elections Commission including Mickey Mouse, although Deez Nuts was forced to drop out of the race because he wasn't old enough to vote, much less run for office.

While Third Party votes typically make up a negligible amount of the total popular vote, the widespread and vocal dissatisfaction of many voters caused the Democratic party and their affiliates to begin a campaign that painted Third Party votes as tantamount to voting for Trump. The anti-protest vote movement is nothing new: many Democrats blame former Green Party nominee and infamous write-in candidate Ralph Nader for taking votes away from Al Gore in 2000, thus effectively electing George W. Bush. The rising popularity of Third Party candidacies even inspired one entrepreneur to launch the #NeverTrump app, which allowed Third party voters in swing states to "trade" votes with Clinton voters and work in tandem to vote against Trump but with their consciences.

One thing is clear from the sheer popularity of Third Party candidates this election cycle: many millennials have major issues with the two-party system, and next time, the parties should take better to care to court the votes of those that will have major political influence in 2020 if they don't want to die with the Baby Boomers.