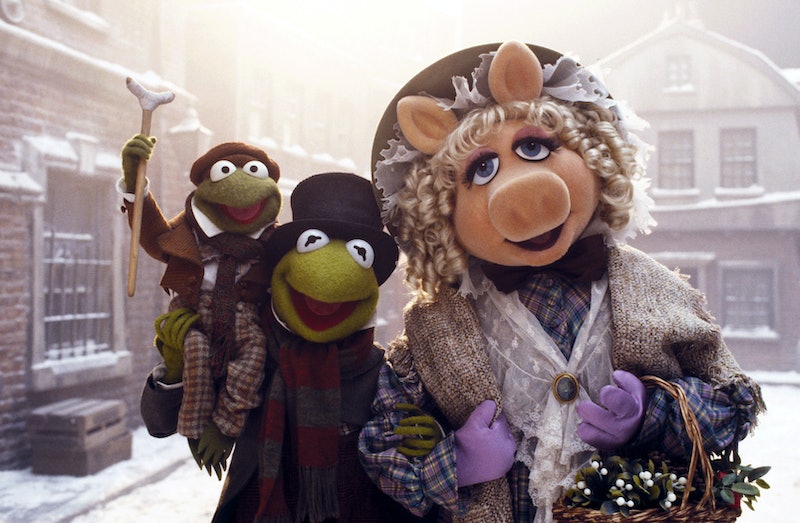 I hate to admit it, but I'm one of those people that are totally ready for Christmas the second that Halloween is over and done with. And one thing that I love to do while in the midst of this joyful season is to load up my MP3 player with some of the best songs from Christmas movies to listen to when I'm out and about. The greatest soundtracks from Christmas movies are ones that play on people's nostalgia for the season, evoking cozy, happy memories, and all the snuggly feels within just a few seconds of music. Luckily, all of the following soundtracks do exactly that.

From original songs that have become contemporary classics in their own right to soundtracks that so perfectly compile and celebrate some of the best Christmas songs of all time, these are the perfect albums for ushering in the festive season. What's so great about these soundtracks is that they aren't just celebrative of the season itself, but are deeply heartwarming for how they evoke potential fond memories of watching all of these movies with loved ones. So, get those chestnuts roasting on an open fire, and pull up these soundtracks to get into the Christmas spirit.

1. The Nightmare Before Christmas

Full of the ghoulish leftovers of Halloween and the saccarine, joyful delights of Christmas, Danny Elfman's iconic soundtrack for Tim Burton's seminal animation is both macabre and magical. "What's This?" remains one of the greatest Christmas songs ever written, which encapsulates the sheer excitement of the approaching festive season.

For me, this Muppets movie is absolute Christmas perfection, and its soundtrack plays a big part in that. Telling the story of Charles Dickens' A Christmas Carol, songs jump between being menacing, moral, loving, and full of fun. But it's the iconic track "It Feels Like Christmas" that, well, feels like Christmas every time I hear it.

Although not every song on the Meet Me In St. Louis soundtrack is particularly Christmas-related, it does happen to feature one of the all-time greatest Christmas songs ever — "Have Yourself A Merry Little Christmas." And it remains just as charming and beautiful a song as it was in 1944.

Though most people are quick to point out how great the soundtrack for the first Home Alone is, I'm of the belief that the soundtrack to the sequel was better. Featuring classics like "Jingle Bell Rock" by Bobby Helms. the Home Alone Children's Choir singing "My Christmas Tree", and TLC slaying (or should I say, sleighing?) their cover of The Ronnettes' "Sleigh Ride", this album is everything.

This album is basically just one big gigantic celebration of Christmas and of some of the greatest holiday songs of all time. With Big Crosby's original version of "White Christmas" sitting alongside a cover of "Winter Wonderland" by The Andrews Sisters, The Polar Express soundtrack is a traditional, festive gem.

Wonderfully iconic and instantly uplifting, I wish it were appropriate to listen to A Charlie Brown Christmas all year round. From the angelic carolling of "Christmas Time Is Here" to the instrumental jazz delights of "Skating", it's one of the absolute best for listening to with a glass of mulled wine on a cold, December night.

As well as making the Annie Lennox and Al Green song "Put A Little Love In Your Heart" into an indisputed Christmas hit, the soundtrack also features holiday greats like Natalie Cole's "The Christmas Song (Chestnut's Roasting On An Open Fire)" and Miles Davis' amazing "We Three Kings Of Orient Are".

9. The Year Without A Santa Claus

As well as the legendary "Snow Miser / Heat Miser Song", this soundtrack also harbors such treats as "Here Comes Santa Claus" and "Blue Christmas". And every single song is top notch and ideal for dancing round your Christmas tree to.

Another Christmas movie soundtrack that manages to feature an abundance of some of the greatest holiday songs of all time (including Eartha Kitt's "Santa Baby" and Ella Fitzgerald's "Sleigh Ride"). This slick soundtrack also features some supreme modern interpretations of songs too, including Zooey Deschanel's duet of "Baby It's Cold Outside" with Leon Redbone.

Featuring a slew of R&B remakes of Christmas classics, the This Christmas soundtrack includes such treats as B2K's version of "Jingle Bells" and Toni Braxton's "The Christmas Song".

Considering how wonderfully irreverent and subversive the movie was, it's interesting to consider how traditional the soundtrack is. Acting basically as a compilation of all of the finest, cosiest Christmas songs ever, Bad Santa includes classics by Dean Martin and Bing Crosby.

13. Christmas With The Kranks

You have to really give props to any Christmas movie soundtrack that features "Merry Christmas (I Don't Want To Fight Tonight)" by The Ramones on it — and that's just what Christmas With The Kranks does.

Yes, Die Hard — otherwise known as the most underappreciated Christmas movie of all time, and it happens to have glimpses of an amazing Christmas soundtrack. As well as featuring "Ode To Joy", the soundtrack includes Vaughn Monroe's "Let It Snow", infamous for closing the iconic action movie.

But why only listen to soundtracks that compile classic Christmas songs when you could be listening to one of the actual originals? Bing Crosby and Rosemary Clooney's legendary duet of "White Christmas" is well worth the price of a download in itself.

There's always Otis Redding's version of "White Christmas" to enjoy too, and it just so happens to feature on the Love Actually soundtrack. Though many of the songs are more about love than they are about season's greetings, there's still Bill Nighy's hilarious "Christmas Is All Around" to enjoy, as well as Olivia Olson's gorgeous cover of "All I Want For Christmas Is You".

It's definitely not too soon to indulge in some Christmas cookies and The Muppet Christmas Carol soundtrack on repeat, right? Because that's all that I want to do in the lead up to Christmas. Too soon or not, that is happening for me, and I highly recommend that you all do the same too.