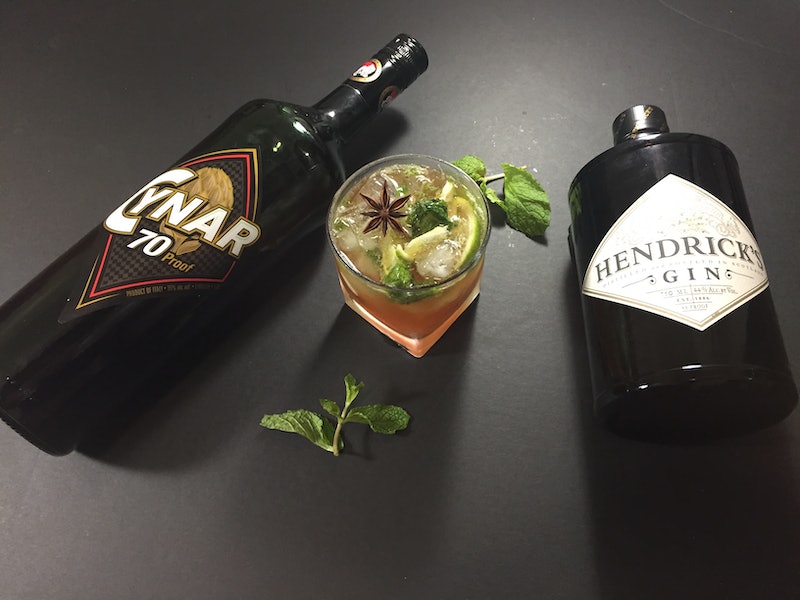 The holiday season is a great time to explore your inner mixologist and with plenty of spirits, liqueurs, and winter ingredients to choose from. But, if you're a newbie to the world of cocktails, you may be wondering where to start. Luckily, you've come to the right place: these 10 easy holiday cocktail recipes I concocted myself will make for great beverages at your party, and keep the buzz buzzing.

I've hosted an annual Thanksgiving party for years, and at the end of my invites, I always explicitly insist my guests arrive empty-handed and let me do all the work. As soon as I hit the send button, I get my menu organized and a schedule for cooking hearty appetizers that will make the week of Thanksgiving a piece of cake. The day of my party is when I remember that alcohol is fun, and run out to buy whatever booze is left in my neighborhood — this almost always leads to 20 people drunk on absinthe. This year, I vowed my biggest stresses will be remembering which batch of molasses meatballs is gluten-free, and keeping my guests pleasantly buzzed instead of wasted.

The alcohol can be the biggest expense of throwing a holiday party, but using natural, inexpensive ingredients that can be found in your kitchen or grocery will make your cocktails standout instead of your bank statement. All you need is the booze and some mixing confidence to make these 10 mouth-watering holiday cocktails.

Making a punch beforehand allows you to enjoy your party to the fullest — and this Angry Elf Punch will make you the center of attention. I like to think of this recipe as a sangria that has reinvented itself just in time for the holiday season. Start by simmering the sugar and 2 cups of red wine in a medium sauce pan, uncovered. Since I wanted to use these particular spirits for their unique flavor, I decided to cut costs by making my own pomegranate juice.

While waiting for the sugar to disintegrate, I pried cut open each pomegranate in 4 sections. The berries will come out easier than slicing in halves, and if you've chosen a perfectly ripe one, they will effortless fall out. Blend the pomegranates into juice (Tip: Depending on your blender, you may have a thick froth, so add water to thin your juice to desired consistency.) Transfer the pomegranate juice into a punch bowl, then add the lime juice, Mezcal, and tequila. Once the wine is looking smooth, turn off heat and allow to cool. Add the remaining wine, the cooled sugar wine to the punch bowl. Place thinly sliced orange peels and pomegranates in bowl for garnish. Serve over ice.

This julep doesn't need summertime to come alive, and you don't need to be a mixologist to whip this up for your guests on demand. Make the simple syrup in advance, by adding half a quart of sugar in a quart sized container and toss in five to 10 stars of anise (more anise will give more of a licorice flavor) Boil water and pour directly in the container and seal with a lid. Shake gently and allow to cool. Once the sugar has completely melted, place the container in the fridge. Now, you're ready to make this holiday julep: in a tumbler (another quart sized container will work if you don't have bar tools), add thinly sliced lime wedges, three to four mint sprigs and pour in half an ounce of the simple anise syrup. Gently muddle, and then fill with ice. Add the Hendricks Gin and Cynar, and shake vigorously. Pour the contents in a rocks glass, using the dirty ice and top with soda.

A mix of muddled sugar cube, turmeric, angostura bitters, and Usquaebach Scotch Whiskey. For this recipe, you'll need the following:

Old Fashioned's are sure to be crowd pleasers, and they're quick enough to make as needed during the party —with the cost of this Scotch Whiskey blend, my plan is to refuse to give it to anyone who doesn't love scotch, but sometimes you gotta treat yo'self and your guests. IMO, this scotch-whiskey is as smooth as it gets.

A mix of London No. 1 Gin infused with lavender, bilberry, honey simple, and lemon juice. For this recipe (6 oz of booze), you'll need the following:

Use a disposable tea bag to hold the lavender and bilberry. To infuse the gin, simply put the tea bag directly in the bottle, seal lid tightly, and shake gently. Let the infusion steep for about 15 to 20 minutes. Don't intend to use the whole bottle? Place the tea in a quart sized container, add the gin, cover and shake. The longer the tea bags sit the stronger the infusion. To complete this cocktail, add the lemon juice, honey simple, and gin in a tumbler (or quart-sized container) and fill with ice. Shake vigorously. Serve in a rocks glass with clean ice and top with soda water. Add a lavender sprig for garnish.

A mix of Amaro Averna, lime, clove, and seltzer with a cinnamon stick garnish. For this recipe, you'll need the following:

Averna is no doubt one of my favorite Amaros — these Italian liqueurs are known for being great after-dinner digestifs. But, IMO, there is no wrong time for Averna. Build this cocktail in a stemless wine or Collins glass with ice. Add Averna, lime juice, and fill with soda. Add two to three cloves and cinnamon stick for garnish, and serve.

Spiced red wine with orange slices, sweetened with molasses. For this recipe, you'll need the following:

Mulled wine is a great warm drink for your guests when they arrive at your holiday party from the cold weather outside. It's tasty, and its super easy to get a pot going while you get ready before party time. The best part is you can repurpose opened bottles of wine that may have lost flavor, because all the spice and sugar will suddenly make an old bottle of wine totally drinkable. Start by simmering a bottle of red for two minutes, and then add the spices and molasses. As the wine begins to boil, add a few orange slices and turn off heat. Remove orange slices and strain into a heat-proof bowl and serve immediately.

Once your guests have properly cooled down from outside, you can rest assured things will be heating up once the party is in full swing, and thank goodness for this ice cream: it makes for a decadent frozen wintery beverages that have remnants of beach life and holidays. This recipe is my own take of a sinful, creamy White Russian: throw the apple vodka, coconut cream, and ice cream in the blender and serve as a tasty frozen beverage after dinner or appetizers in a glass mug, with nutmeg garnished on top.

You can buy coconut cream at Trader Joe's or you can follow my instructions to make your own coconut milk for cheap from scratch the day before party time. To make it creamier, just add less water.

A mix of homemade spiced ginger beer, Assam infused Hendricks, with an orange twist. For this recipe, you'll need the following:

(Disregard this, and skip to the infusing part if you plan on purchasing ginger beer from the store to save time.)

I love ginger beer cocktails, but I don't love the sweetness and/or cost of most ginger beer on the shelves. This homemade recipe allows you to spice up your ginger beer with some warming ingredients and total control over high-fructose syrup, which your guests will thank you for when they wake up without the sugary hangover from having a few of these. Start by placing nutmeg, turmeric, ginger, sugar, and water in a saucepan and simmer until sugar is completely combined. Turn off flame and the syrup congeal for one hour. Transfer to empty liter bottle of seltzer, fill up completely with seltzer and store in fridge making sure cap is sealed tightly.

For the infusion, you'll need the following:

Divide the black tea in half, placing one and a half tablespoons in each tea bag and put directly in the bottle of Hendricks. Give it a few shakes and let steep for at least 20 minutes, as previously stated, the longer the steep time the more potent the infusion.

Now that you have your ginger beer and your gin infusion, the cocktail is going to be super easy to make up for your guests: Build in a rocks glass with ice. Add one and a half ounces of gin infusion and fill the rest up with the homemade ginger beer. Sprinkle ground turmeric on top for garnish with a ginger candy and serve.

A Usquaebach Whiskey-Scotch blend with chili-clove infused honey. To make this recipe you'll need the following:

Nothing says the holidays are coming like a Hot Toddy. And good news, making your own hot honey is easier than you think! To make the hot honey simple syrup, thinly slice the hot chili peppers and place them in a small saucepan with honey and clove. Let simmer for an hour, turn off heat, and let congeal for 30 minutes. Add a third cup of hot water. A smaller amount of water will give you a stronger flavor, but less syrup to work with.

In a heat-proof mug, add 3/4 ounce of hot honey, whiskey-scotch blend, and fill with hot water or chamomile tea. Make your garnishes ahead of time, by slicing thin orange peels from an orange. Stick cloves into each orange peel, they'll puncture the peel themselves, but make sure you have enough room in between each so the peel remains intact. Garnish each toddy with 1 clove-orange peel.

The French 75 is a classic gin cocktail that can be adjusted for the holiday season and your guests palate. I used New Amsterdam Vodka instead of gin, and added some homemade apple puree. To make an apple puree, cut a medium sized apple into four sections to remove the seed. Slice the apple down to smaller pieces to use in a blender. My puree was made thicker by using a Nutribullet and only took a minute to puree one apple, which yielded enough for four Holiday 75 cocktails.

Build in a wine glass or champagne flute. Add three quarters of an ounce of apple puree and half an ounce simple syrup. If you already made simple anise syrups for the julep, you can add more flavor by using it in this recipe. Gently stir, and fill with prosecco. Garnish with dried apple slice.

Now that you've got some inspiration for your holiday cocktail list, you can start channeling your bartending skills. Note that many of the ingredients are used in different cocktails on this list, to save on cost. Pick smart and you just might save a dime or two while your impressing all your guests.