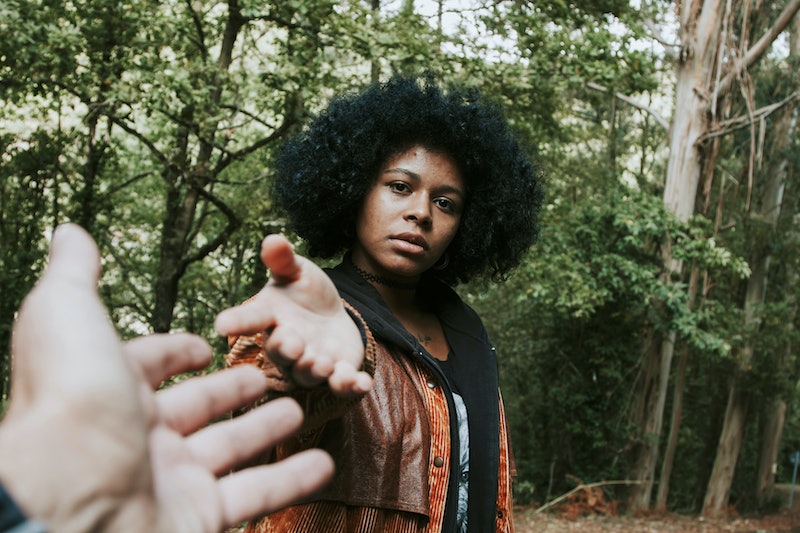 If there's one thing that everyone can agree on, it's that getting over unrequited love isn't easy. No matter how old you are, having one-sided feelings for someone is a sh*tty experience. From your elementary school crush who wanted nothing to do with you at recess, to having full-blown adult ~feels~ for someone who's either taken or disinterested, there's no if's, and's, or but's about it: Liking (or worse, loving) someone who isn't into you sucks. So if we know how terrible it is, why do we keep doing it? "People generally get into and out of relationships too quickly, especially in our increasingly technological world where everything happens faster and faster and there is more and more pressure to do/think/act," Natasha Sandy, a Teletherapist at YouMatter! Phone Therapy, tells Bustle. "This gets in the way of letting love bloom and blossom naturally and organically, which can take some time, and should."

This pressure to always act on our feelings can put us in a precarious position: if we're too eager to find love, we might be more likely to chase someone who's not interested in us, because we think it's better than chasing no one at all. In reality, it's totally normal to be single and not dating anyone, and focusing on yourself and your own needs can be crucial to finding love in the future.

Totally forgetting someone who's not into us, though, is easier said than done. Here are seven reasons we might be inclined to harbor feelings for someone who's expressed that they're definitely not interested in us. Don't be ashamed to have a good cry if you need to, because unreciprocated crushes are the worst.

Not to perpetuate the irritating "daddy issues" trope, but our relationships with our parents definitely impact the ways we form romantic relationships as adults. "People with upbringings that had them yearning for more love or begging and pleading for and chasing love, where love generally just wasn't poured out unconditionally, may find themselves chasing people who aren't interested in them," says Sandy. "It really hurts when genuine love isn't reciprocated."

"Attachment explains everything," says Gretchen Kubacky, Psy.D. "Once we've formed a relational attachment, we'll hang on. Attachments feel good and we want more, more, more." Even though we know someone doesn't like us, it's hard to stop fixating on them and move on to a more worthy candidate. If you feel any sort of attachment to someone, it's normal to crave more of that feeling, even if doesn't make sense.

"Often, the people who become stuck in chasing unattainable people have some self-worth issues," says Vironika Tugaleva, life coach and author of The Love Mindset. "If you don't believe that you're good enough to attract people who want to spend time with you, then you'll sabotage by setting your sights on people who don't want you. Self-love and self-awareness can heal many of these behaviors."

"Some people look for 'bad boys' or 'bad girls' who they think they can 'fix' or 'save' — this will usually spell disaster for the relationship, or dysfunction at the very least," says Sandy. "People who want to save or fix others may be running from themselves and the issues they need to fix or save in themselves."

"Sometimes we’re scared of intimacy and uncertain if we want a committed relationship, so we find someone who’s equally uncertain, which plays out in him or her not being available," says Karen R. Koenig, MEd and LCSW. "We may be scared of abandonment or being hurt emotionally in other ways. In this dynamic, it’s easier to blame him or her for not coming through when actually we’ve made this particular choice so we can avoid an intimate relationship."

6. We Want To Avoid Reality

"We may carry a torch for someone in reality or memory to avoid dealing with a real live mate or partner" Koenig says. "In these instances, we imagine that our beloved is perfect and we don’t have to deal with the nitty gritty problems that happen in real relationships. In this dynamic, we may be unavailable to wonderful potential partners because it’s safer to day dream about the one who got away."

"Sometimes people chase others who aren't interested because they genuinely love them and don't want to give up just yet," Sandy says. "So long as they are waiting and chasing respectfully and minding the other person's boundaries, then love just may blossom."

Although there's no real way to control how we feel and about whom, you can at least take solace in the fact that there are concrete reasons we develop unrequited crushes that are hard to shake. It might not make it any less painful, but it's nice to know that the awful feeling of liking someone who's not into you is universal.