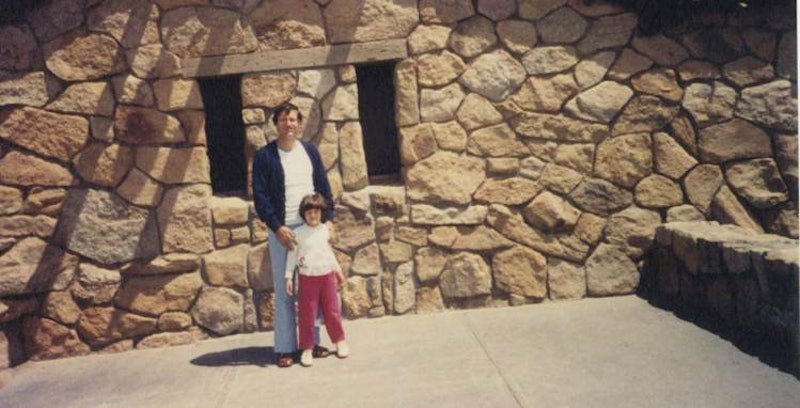 “Heard your dad died,” my first grade classmate Francisco said, hovering next to my little locker as I stored my plastic pink tote on a hook. He said it in earnest, as a curious 7-year-old would, after Miss S. shared the news with the class while I was absent, attending my father’s wake and funeral.

I was uncomfortable being the “other” among two-parent classmates. It’s any kid’s nightmare to stick out like an unfurled slap bracelet, so I channeled my inner Olivia Pope to retain my image. I slammed my locker shut, and before walking into class, I looked him in the eye and said “So?”

It’s easy to convince grade schoolers that you aren’t different because your 44-year-old father succumbed to a heart attack on a soccer field. It wasn’t until sophomore year of college, however, that I discovered that the world makes assumptions about women without fathers. A man certainly made a snap judgment about me.

I had briefly dated John, yada, yada, yada, and eventually we settled into a friendship. We ran into each other at a bar one night, and inebriated, he blurted out, “You know, I was wary of dating you once you had told me about your dad. But you know what? You’re actually a cool gal.” My mouth opened, but before I could actually respond, he wandered off.

The subtext was that he originally pinned me with two scarlet letters—Capital D and Capital I.

“Daddy Issues” is a label that reeks of that antiquated, sexist expectation that women don’t dictate their own destiny. Not only does the language itself infantilize women, it unwittingly chains them to the men from their past. Whether untimely deaths or shitty acts of abandonment or neglect took place, the idea dooms them to play out a set of red-flag relationship patterns.

It was John's loss but even so, I felt ashamed, branded as a damaged good. I intellectualized my “issue” and dove into Victoria Secunda’s book, Women and Their Fathers, taking for granted all the research concluding that a fully present father was the absolute road map for a woman’s romantic success, along with high self-esteem, healthy eating habits and other positive attributes that were apparently out of my reach.

For my senior year literary journalism class's final project, I wrote a paper theorizing that, despite lack of connection, I stayed with my longtime boyfriend because he shared certain traits with my father. (They were engineers, played soccer on the same field and had a gap between their front two teeth.)

That may have been true and insightful. But after graduating college, moving, and entering the New York City dating world, I regressed to the tactics of my 7-year-old self. I had always avoided talking about my dad, but now I eliminated family talk entirely because I didn’t want to draw attention to the fact that it was incomplete. When I fell in love with a man 17 years older, and he pulled a fade out (I guess they don’t always age out of that), I didn’t call him out on being a narcissistic asshole. I was so aware of the stereotype, and I couldn’t bear to fill out the rest of it.

Obviously I’m sensitive to it. My ears burn when people throw around those two words casually. It’s the odd, “Oh, she def has daddy issues” joke judging a young woman who makes out with a grandfatherly acquaintance at a holiday party. Sure, it’s pretty gross, but is it really about her needing a daddy? I would argue that being a drunk was a bigger part of her identity than being a daughter.

When you think about how the term is used in entertainment, it’s a neat trick hurled at women to blame them for a culture of rampant objectification. It’s laugh bait from lazy screenwriters who make it seem cute when Ryan Reynolds calls a strip club a den of daddy issues. It has been invoked (as a hashtag, even) since Miley Cyrus made twerking a national topic.

As I turned 30 and grew into my “all the fucks” skin, I began owning my past. I Instagrammed #TBT pics of my father and shared stories, like the time in ‘87 when he brought home a computer—which I immediately destroyed by spilling a glass of Sprite on it. I imagined that we’d get into lively Android v. iOS debates if he were around today. I wondered if he thought of my mom, my sister and I when he collapsed on that soccer field.

When dates ask about my family, I don’t avoid the truth. I don’t need to pile on the details, but it is fair game to share my story and say it was hard on me and my family. (Wouldn’t it be weird if it weren’t?) The right person will measure me by my ability to wring meaning and bounce back from the series of happy and sad events life sends our way.

There’s still plenty of wrong out there. Not too long ago, I went on a third date with a man who happened to have a daughter from his previous marriage. I could tell he wasn’t quite sure what to make of me when he asked what I liked about him. I told him that I was inspired by his creativity and admired his dedication to parenting. There was a beat before he asked, “How old were you when your father died?” The association of the two questions spoke volumes to me, but I didn’t feel the need to prove that I wasn’t one of those girls with daddy issues.

More like this
18 Father's Day Poems That'll Make You & Your Dad Tear Up
By Michelle Regalado and Siena Gagliano
GIRLI & Q Fell In Love At A Skatepark & Never Looked Back
By Jessica Morgan
Melony & Gia Prove That Couples Who Grow Together, Stay Together
By Jessica Morgan
Why You're Seeing Green Bandanas At Abortion Rights Protests
By Lexi Inks
Get Even More From Bustle — Sign Up For The Newsletter