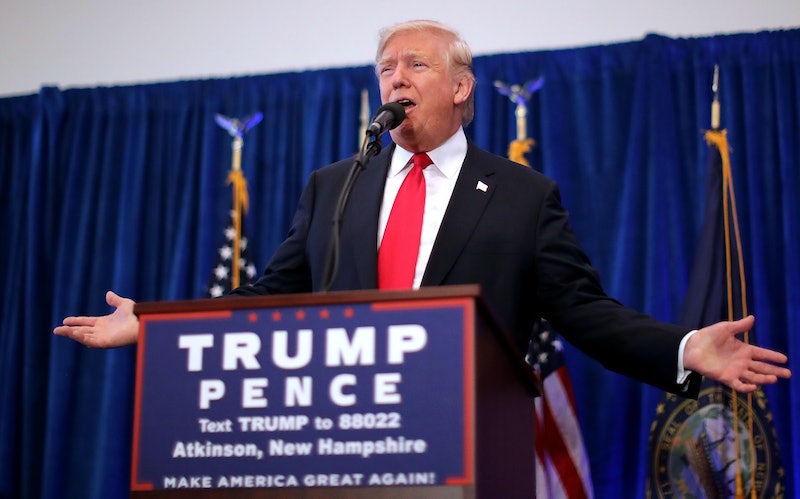 The general election is finally over, and, after months of speculation, we can definitively say which states went Team Red in 2016. Donald Trump needed swing states' support in order to win the presidency, according to FiveThirtyEight, and he succeeded. Here's how things actually played out.

The tipping-point states in the 2016 presidential election were: Arizona, Colorado, Florida, Iowa, Michigan, Minnesota, Nevada, New Hampshire, New Mexico, North Carolina, Ohio, Pennsylvania, Virginia, and Wisconsin. In late October, just 11 days before the election, FiveThirtyEight reported that "almost all the swing states were now 'must win' for [Trump]," but conceded that things could change if the race tightened.

It did. By Nov. 4, Clinton's lead over Trump had diminished enough that "it wouldn’t take more than a normal amount of polling error to wipe the lead out and leave Trump the winner of the national popular vote." At that time, Trump had slight leads in Florida (0.2 points) and North Carolina (0.2 points), as well as a more substantial advantage in Ohio (2.6 points) — all states President Obama won in the 2012 election. Additionally, Clinton was only barely maintaining her leads in Nevada and New Hampshire, both of which were, again, blue in 2012.

The biggest shock of the night was that Donald Trump won in Michigan and Wisconsin. Both those states were supposed to be in Clinton's column, and both were won (pretty easily) by Barack Obama. No one really predicted Trump had high chances there (well, beside Michael Moore). But once he came in as the winner in Wisconsin, the map was all but set for a Trump victory.

It will be interesting to see if a generic Republican, without the celebrity and bluster of Donald Trump, would be able to flip this many states into the red column. We might have to wait a while to find out. If Trump runs for reelection in 2020, the earliest we will know is 2024. And there's just no saying where the country will be by then.