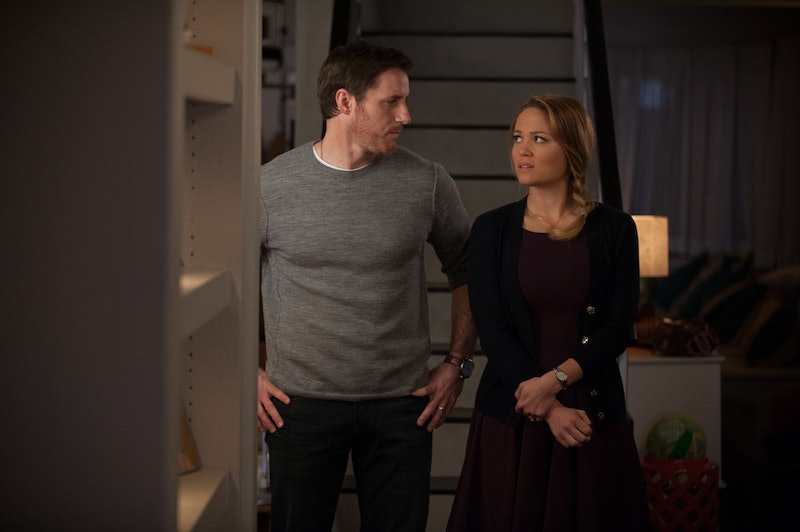 The tension between Parenthood's Joel Graham and Julia Braverman-Graham (nee Braverman) has been riding itself out all season. It started with underlying bitterness and listlessness, then escalated through an arguably inappropriate friendship into a kiss, then escalated yet again into a separation. Tonight, the show will continue with its ongoing marital saga — but when's the next big move coming? All we have left to decipher is some teases from Parenthood creator Jason Katims.

Katims, best known for Friday Night Lights (AKA the harborer of one of the best depictions of marriage ever on television) outside of his work on Parenthood, spoke rather vaguely — but also kind of hopefully?— about the torn apart couple in a recent interview with TV Guide:

There's been a lot of change for a lot of our characters, and a lot of those changes come to a head in this last episode. It really does have a feeling of so much has led to this moment. I know people are really mad... about the Julia and Joel stuff, [but] I think there's something in that story that I think I will give people... something to hope for, to talk about.

And in another one to TV Guide, and the challenge of getting into Joel's side of things:

I really felt like we wanted to explore this story this year because I felt it was something we hadn’t explored yet on the show. I’m not either on one person’s side or the other. I think people tend to be more with Julia for a couple of reasons—he’s clearly the one who chose to leave, but the other reason we tend to be with her is because it’s the Braverman show. You tend to have more scenes with her. She has more people to talk to than Joel does. I think the challenging part of the story is that once he left, it was hard to get into his head and get his perspective on things.

He also says that when it comes to tonight's episode — the preview of which showed Joel reaching for his boss' hand over a romantically-lit dinner — audiences should "just wait. There's definitely a twist."

It's been obvious for the past, say, half a season that what Joel and Julia really need to do at this juncture is have a full-out, painfully honest, all-cards-on-the-table fight if they're ever going to really get past all the grains of distrust and resentment driving them apart. But in order to get there, Joel's got to re-commit. Maybe that's what's coming tonight?

We'll of course have to wait a few hours to see, but until then, it should probably be noted that Julia's also out to dinner that night — with Ed. And if Joel finds that out, it's entirely possible we'll get that fight sooner rather than later.

More like this
'Line Of Duty's Writer Just Dropped A Bombshell About Steve & Kate
By Catharina Cheung
'Stranger Things' Season 4 Volume 2 Trailer Teases New Episodes Coming July 1
By Grace Wehniainen and Gabrielle Bondi
The Creator Of Suri’s Burn Book Never Got Burned
By Allie Jones
Why Simone Ashley Had To Study Snails For Intimacy Training, Pre-‘Bridgerton’
By Grace Wehniainen
Get Even More From Bustle — Sign Up For The Newsletter