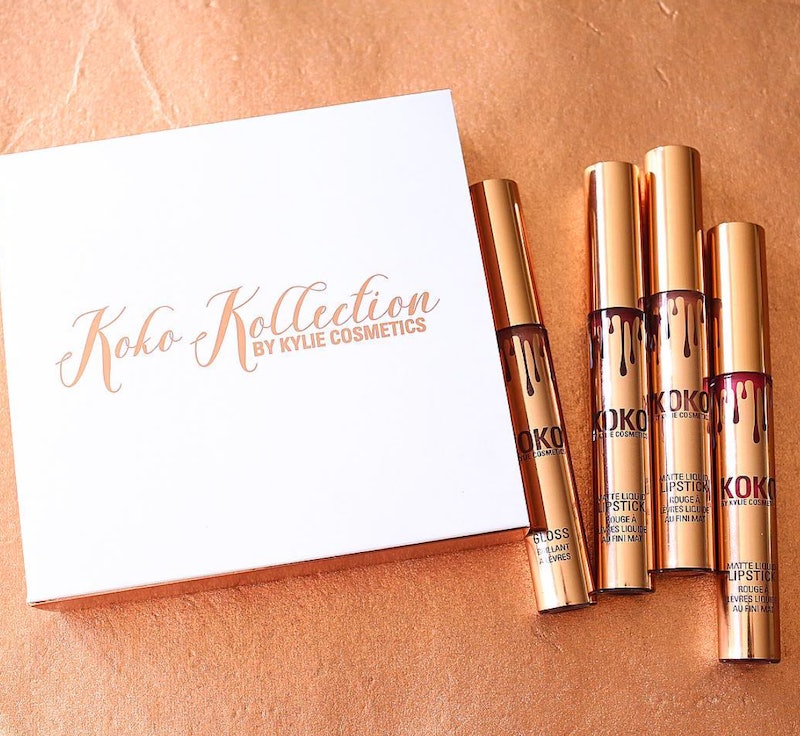 Why settle for one Kylie Lip Kit (or Kylie Gloss) when you can have four and at a deep discount with free shipping? Sisters Kylie Jenner and Khloe Kardashian collaborated for the Koko Kollection for Kylie Cosmetics Holiday 2016 season. The Koko kollab boasts four lip products in pink and berry shades, falling in line with the pale pink Koko K Lip Kit! There are three mattes and one gloss. While three Kylie matte liquid lipstick singles and a gloss would normally cost $66 when purchased separately, the Koko Kollection, which is packaged in the gold tubes similar to the Birthday Edition products, costs $40 for the set. Since Kylie Cosmetics is offering free shipping on domestic orders over $40 from now through the holiday season, the makeup mogul is offering some seriously sweet savings, in addition to some bomb AF new lip shades.

While they are all gorgeous and can be mixed together for kustom lip looks, my question is this. Can you buy the Koko Kollection lippies as singles or are they only available as a set?

It looks like the Koko Kollection will only available in the set of four upon launch. That shakes out to $10 per tube. Bustle reached out to Kylie Cosmetics to inquire about the future solo status of the lippies in the Koko Kollection. Perhaps these shades/textures will be made available as individually available hues in the next few weeks or after the holiday season. Or not!

Update: Kylie Cosmetics responded to our email, writing: "The Koko Kollection is offered as a complete set. Currently, these shades are not sold as singles."

My favorite shade of the quartet is DAMN GINA, a glittery pink gloss. My fave of the three mattes is KHLO$, which looks a bit deeper than Koko K, which Khloe inspired. GORG is deeper and darker than what I usually rock, while the hot pink OKURRR is also a bit daring for me. IDK if I'd wear those two shades, personally! But I'd still buy the set of four if that was my only choice.

You really are saving a nice chunk of change with this set.

This collection is aces. While Kylie Lip Kits, which are mattes, are usually sold with matching liners, this set looks to be sold minus liners. The Kylie Glosses don't normally come with a liner in a set. Perhaps Jenner will repurpose the Koko mattes as full Lip Kits, with their own liners and sold on their own, eventually?

I am loving DAMN GINA.

The Koko squad is all you need for a supremely painted pout through winter.

KHLO$ is so money.