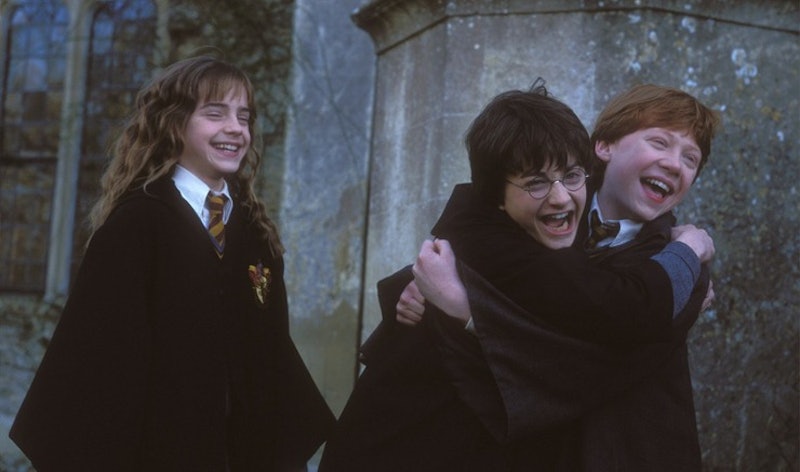 It's officially been 15 magical years since the movie version of Harry Potter and the Sorcerer's Stone premiered in theaters. Nov. 16 marks the anniversary of the first time die-hard Harry Potter readers ventured to movie theaters — books in hand — bursting with anticipation at seeing their favorite literary moments on-screen. In more ways than one, the Harry Potter film series shaped my life in a way I didn't even realize during my childhood, and that effect carried on into my young adulthood. For me, this wasn't just a film about three kids attending a wizarding school in the Highlands of Scotland.

For those who weren't old enough to read about Hogwarts on the page at the time, the films were the first introduction to this world of magic and mystery. I'll never forget being six years old and hearing the hauntingly beautiful piano intro to "Hedwig's Theme" for the very first time. As Harry and his friends grew up, I grew up alongside them. This was a story of triumph, friendship, and hope, and it continues to be for generations of viewers and readers. Not every book series is lucky enough to be transformed into a set of films as fantastic as these, and while they weren't perfect, the Harry Potter films bestowed many young kids with a taste of the wizarding world and all its wonders.

If you've been a fan of these films for the majority of your life like I have, you'll understand how meaningful these stories have been as we've grown up, and the Harry Potter & The Sorcerer's Stone started it all.

Here are just a few ways the Harry Potter world forever shaped my life as a lifetime fan of this magical universe — using some of the well-known spells from the magical world.

Accio is the summoning charm used by Harry and other wizards and witches to, well, summon things. Growing up, this was always one of the spells I most wanted to be able to cast — mainly because I didn't want to get up to look for the television remote. Even though I never did master the art of the Accio charm, I've come to realize over the years that somehow this fantastical world of moving staircases and flying cars had accio'ed me.

The moment the Harry Potter summoned me, I was hooked. Every character on the screen and every word out of their mouths was something I clung to. My already-present love for mystery and adventure only grew, sending me to the library in search of books that would invoke the same feeling of wonder and wanderlust within me. This eventually pushed me to read what would soon become my favorite book series of all time (I think you can guess what it is), and it fueled my spirit to ask questions, explore and adventure on.

It was something I hadn't asked for, but that I wanted and needed (like the sword of Godric Gryffindor finding its way to Harry). Accio wonder. Accio friendship. Accio hope. Accio Harry Potter.

Incendio is the fire-making charm and the Harry Potter films have lit my own metaphorical flame inside me to stay determined and strong no matter what. Harry Potter films are not only an immersive experience of fantasy and mystery — they also depict scenes of action and suspense, filled with duels and wand-to-wand combat that colors the screen in a way that can only be magic. Within these scenes, we see Harry, Ron, Hermione and so many others go tirelessly into battle, traversing mountains, cemeteries, dungeons, underground vaults, and taking on unimaginably epic creatures (all before potions class).

Upon first watch, these scenes of adventure struck me as awe-inspiring. I had never seen anything so incredible and, ironically, realistic (the basilisk). What watching these scenes of battle and travel taught me was not that I should learn to skillfully wield a wand to defeat Lord Voldemort (I did try), but that I was strong. Like Harry and his friends, I would always have a new challenge to face and overcome — though my challenges consisted of fewer dementors. If the Golden Trio could succeed, so could I — it was my own, personal Incendio charm.

Alohamora is the Unlocking Charm and, in many ways, the Harry Potter universe has opened the door (see what I did there?) a whole world of possibilities for viewers and readers alike. As I've grown and met new people, I find that we all have different interests, different ideas, and different passions. This allows for everyone to share their thoughts with one another and learn from them. But it can also be difficult to make friends with others who you feel just don't understand you — especially if you were like me and would much rather read a book as a kid than interact with others.

One thing I have found as a young adult, though, is that no matter where you go, somebody out there loves Harry Potter just as much as you do. With this shared bond over a group of characters and magical history, it can begin to feel like you attended Hogwarts together, making it almost impossible not to make friends with someone who has a passion for this mystical world. In that way, Harry Potter unlocks courage, and unlocks friendship. Many of us are Hogwarts alumni at heart.

Probably the most memorable spell for any Potter fan is Expecto Patronum, or the defensive charm. This spell channels the energy of your happiest memory to protect you from darkness and evil. Growing up and watching these films, there were many moments in which I — and I'm sure many other Potter fans — wished I had a wand and magical abilities. Even though I was never able to walk into Ollivander's shop and have my wand choose me, over time I discovered I had gained something else from this magical world.

As the series moves forward, the films become progressively darker — both figuratively and literally — but Harry learns to fight against every new obstacle that enters his path, no matter how difficult it is for this overworked teen. If only subconsciously, Harry's ability to fight, learn, and overcome taught me to value the power of love and friendship when overcoming any kind of darkness. His journey taught me to look beyond my comfort zone, reach out to others, and embrace my emotions to take on the world. In that way, I kind of learned how to cast my own Expecto Patronum charm whenever I need to, and I have to say it's been very useful.

Lumos is the wand-lighting charm and Harry Potter illuminated my mind to the different kinds of evil in the world, as well as the different kinds of good. Perhaps the greatest thing I've learned in my lifelong journey as a Harry Potter fan is that fiction is almost always based in reality in one way or another. As mystical and surreal as this world may have seemed, every part of it was rooted in truth and something we could all relate to. From Snape and Umbridge to the Ministry of Magic and Voldemort himself, the characters and journeys depicted on the screen opened our young eyes to the world around us, by providing us with something to relate to and to understand.

For me, it was scary to think that there are real-life Umbridges and Voldemorts out in the world, but as I've grown, I've found the reality of the wizarding world empowering. Harry Potter has taught me to embrace my strengths, to feed off of potential, and to go wherever the next adventure takes me.

As different as the films are from the original text, both the magical books and films have had an impact on young lives all over the world. Harry Potter & The Sorcerer's Stone and all the films that followed it brought to life a world that is so relatable for fans everywhere.