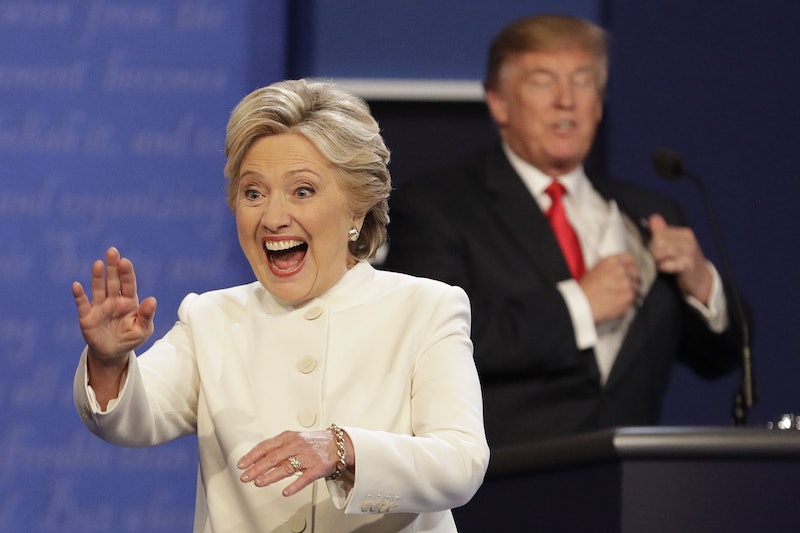 As we sprint towards the finish of the most exhausting election season of our lifetime, we could easily fill a book with the most ridiculous moments that transpired over the course of it. Though laughing at the debate faux pas and unexpected comments made by both Democratic candidate Hillary Clinton and Republican candidate Donald Trump has frequently been one of our only consistent sources of relief, these bizarre election moments actually often reflect more than randomness — they reflect the usage of specific psychological techniques.

These techniques are designed to elicit a strong reaction from the public — and by and large, they have succeeded. The past few months have elicited enough stress in the American public to warrant a study by the American Psychological Association, which found that over half of the population reported that the election is a "very or somewhat significant source of stress." Sue Elias, a clinical social worker in Manhattan, told the New York Times: "I've been in private practice for 30 years, and I have never seen patients have such strong reactions to an election."

Long after this election is over, we'll probably still be having nightmares featuring the image of Donald Trump lurking inches behind Hillary Clinton as she tried to talk during the second debate. But Trump's lurking wasn't just creepy — this moment was also a classic example of physical intimidation, wherein an person uses "irrational fear or uncertainty to exploit others," by using their physical force to exert power. Physical intimidation manifests in movements such as standing too close to someone, using aggressive physical gestures, or backing people into corners, in an attempt to take control over the space by use of physical force.

2. Appealing To The Id

Freud believed that the human psyche, or personality, was split into three aspects: the ego, the superego, and the id. The superego exerts moral judgment while the id is our instinctual desires, and the ego mediates between the two to produce acceptable social interactions. Appealing to the id is considered to be an effective tactic in advertising and marketing, by using ads that are targeted directly at people's instincts — most commonly in advertisements that utilize sexuality.

But with this election, we've seen numerous appeals to the the id in ways that don't usually occur in daily life. Trump's invocations of fear — or comments like, “I could stand in the middle of Fifth Avenue, shoot somebody, and I wouldn’t lose any voters" — show Trump appealing to the ids of potential voters. And for many of his supporters, it's a selling point; as Rich Lowry wrote for Politico, "Since Trump has no super-ego keeping him in check—he doesn't care about the political rules or personal manners—he can unleash unbridled hell on 'Crooked Hillary' and the dishonest media."

But this appeal isn't always conscious; as a neuroscientist explained to Business Insider, "Trump's popularity can be explained by how he triggers certain emotions — anger, fear, and aggression — in the 'fear center,' which is part of the limbic system in people's brains."

By now, anyone who's watched one of the debates or listened to a Trump speech can probably do a spot-on impression of the way he speaks. But you may not have known that there's actually a name for this garbled succession of words that don't quite seem to fit together: word salad.

Though we've all seen Trump do this a number of times over the course of the election season, there are a few moments when he came up with some truly next-level kale Caesar:

"And we have a Fed that's doing political things. This Janet Yellen of the Fed. The Fed is doing political — by keeping the interest rates at this level. And believe me: The day Obama goes off, and he leaves, and goes out to the golf course for the rest of his life to play golf, when they raise interest rates, you're going to see some very bad things happen, because the Fed is not doing their job."

"Look, having nuclear—my uncle was a great professor and scientist and engineer, Dr. John Trump at MIT; good genes, very good genes, OK, very smart, the Wharton School of Finance, very good, very smart —you know, if you're a conservative Republican, if I were a liberal, if, like, OK, if I ran as a liberal Democrat, they would say I'm one of the smartest people anywhere in the world—it's true!—but when you're a conservative Republican they try—oh, do they do a number—that's why I always start off: Went to Wharton, was a good student, went there, went there, did this, built a fortune—you know I have to give my like credentials all the time, because we're a little disadvantaged—but you look at the nuclear deal, the thing that really bothers me—it would have been so easy, and it's not as important as these lives are (nuclear is powerful; my uncle explained that to me many, many years ago, the power and that was 35 years ago; he would explain the power of what's going to happen and he was right—who would have thought?)"

While one could argue that Trump partially engages in word salad because he doesn't really know what he's talking about, using word salad in an argument is a way for the speaker to gain power by confusing their opponents in order to take control of the conversation. Speaking in a way that is purposely confusing can keep the dialogue from going in a meaningful direction, and chip away at the opponent's ability to make coherent points.

You know how you know that you're supposed to smile when you're introduced to a mutual friend or look engaged during a work meeting? Those actions are called display rules — they are cultural standards that govern how we are expected to express ourselves emotionally, through facial expressions and other emotional displays.

Usually, politicians and other public figures are very careful to follow display rules, especially during media appearances, because the perception of how they act is visible to the general public. During the debates, we saw these rules be broken consistently by both candidates. From audible sighs to eye rolls to the famed Jim Halpert eye contact with the audience at home, Trump and Clinton both appeared to have given up on maintaining an appropriate facade, and turned instead to humoring the American people with expressions that seemed to indicate their true feelings...though that impression, too, could have just been another psychological technique.