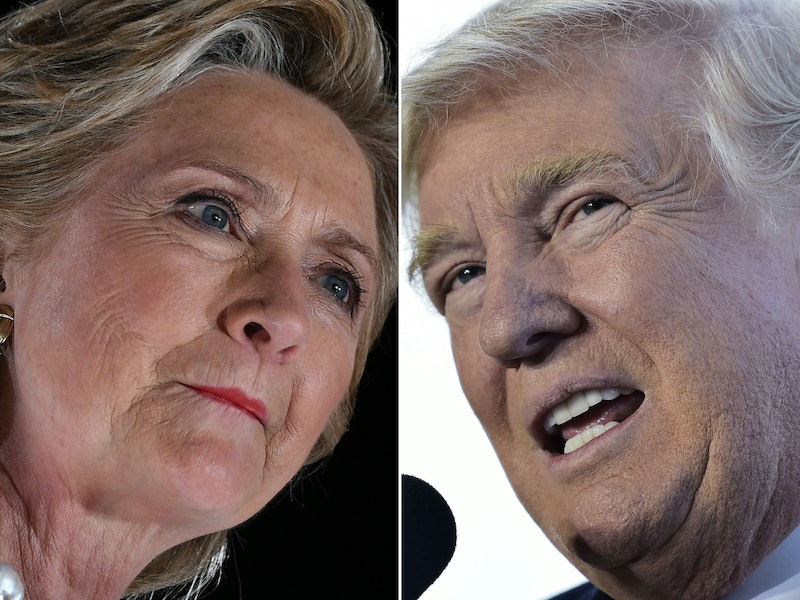 The 2016 presidential election will have wide-reaching effects no matter what the outcome, but it also has already had very personal ones: The election has been hurting women's mental health. Between being triggered by Trump's comments about women, getting into fights with loved ones over which candidate should win, and getting stressed out over the general drama of the election, this fall has presented a number of challenges to our well being.

Women in particular have been vulnerable, since Trump's misogynistic remarks and sexism toward Hillary Clinton have been all over our news feeds, newspapers, and televisions. Perhaps most famously now, a tape from 2005 leaked in which Donald Trump was recorded saying that if you're famous, you can do whatever you want to women, even "grab them by the p*ssy." His defense of the statement made matters worse by implying that sexual assault is not a serious issue. Then, there are the misogynistic remarks directed toward Hillary Clinton by Trump and other politicians and the media, which remind a lot of women of sexism in their own lives.

Here are some ways the Trump and the election have affected the mental health of the American population in general and women in particular.

Calls to the Rape, Abuse & Incest National Network sexual assault hotline spiked by one third during the weekend after Trump's Access Hollywood tape leaked his "grab them by the p*ssy" comment. Supporting the theory that he brought back people's memories of their own assaults, several survivors tweeted about being triggered, and Amber Tamblyn wrote on Instagram about how his words reminded her of her own assault.

Women Are Talking To Their Therapists About Trump

Several therapists told TIME that their women clients have spoken to them about memories of abuse and discrimination triggered by Trump. "More than one client of mine has talked of physical nausea that they relate directly to current political happenings,” psychotherapist Melissa Lester Olson said. "Women who I have seen for years are only now bringing up physical and sexual trauma from their past. I think this election is re-traumatizing them." A woman named Lauren Flower-Kim said she had a nightmare of Trump "looming over" her, much like he loomed threateningly over Clinton during a debate. As Elana Sztokman pointed out on Everyday Feminism, Trump has reminded people not only of sexual abuse but also of psychological abuse through his aggressive debate tactics.

The Election Is Generally Stressing People Out

This year, for the first time, the American Psychological Association included a question about the election in its annual Stress in America survey. And 52 percent of Americans answered that the election was indeed stressing them out. Though people didn't describe why this was the case, this problem seems more common for women, suggesting it may be related to sexism. An ABC News poll found that 51 percent of women, compared to 39 percent of men, were stressed out by the election.

Arguments Over The Election Are Hurting People's Relationships

Given how controversial this election has been, it's no surprise that it's causing rifts in people's relationships. Four in fives couples who support different candidates have fought about the election, according to a Pew Research survey — and these conflicts are often by driven by Trump's misogyny. "With him being a dad to three girls, I can’t wrap my head around him supporting such a dangerous pig," one woman told The NY Daily News of her husband. According to a study by the fertility app Kindara, one in five female Democrats feels the election has hurt their sex lives. Four percent even said the results would impact whether or not they had kids.

If you're stressed out about or triggered by this election, you're definitely not alone, and it's more important than ever to practice self-care. And tomorrow — go exercise your right to vote.