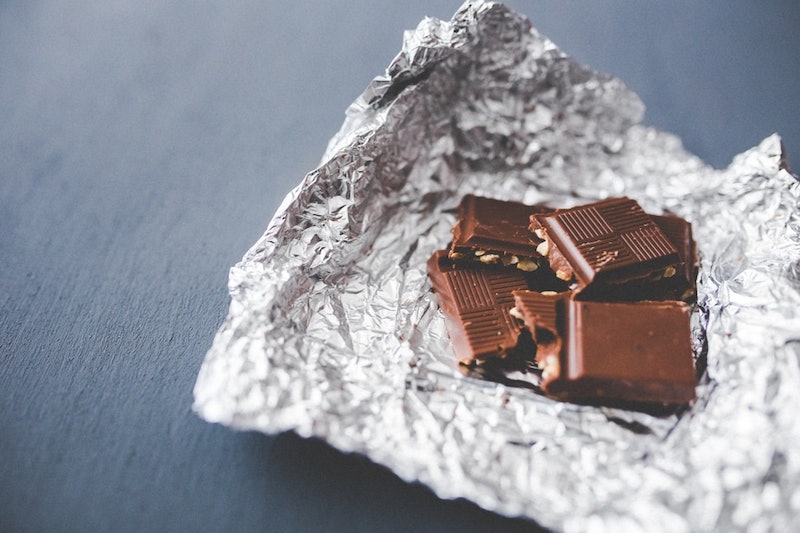 In the midst of all the election hellfire coverage, this has actually been a remarkably good week for news re: your period. Just last week research got a little closer to understanding exactly why women crave chocolate before their periods, explaining the method behind the madness; now, in support of the magic behind the madness, there is a company in Switzerland marketing a chocolate bar for period pain. Marc Widmer of the company "Chocolate With Love claims that his bar "Frauenmond," or "women's moon" bar, has alleviating properties that help with menstrual-related issues not just for the sake of satisfying a craving, but for dealing with cramps. (Bustle has reached out to Widmer for comment, and will update upon hearing back.)

According to The Independent, Widmer shared with 20 Minuten the bar has is 60 percent cocoa solids and contains 17 Swiss mountain herbs. He stressed that the bar, which retails for approximately $12.80 per 100 grams (the size of a typical chocolate bar), is not meant to replace medication, but for use as a reliever.

"We want to make the menstruation days of women more comfortable," Widmer told 20 Minuten. He also shared that it's not limited to women: "Of course men can also eat the chocolate. I myself have already tried [it]."

Incidentally, whether or not there is some actually period magic behind these Swiss herbs, Widmer isn't too far off the mark. The study published last week in the Annals of Endocrinology about chocolate cravings around your period revealed that due to an increase in estrogen and progesterone, women often have a deficit of serotonin, a mood-regulating hormone, in the days just before menstruation. The reason women crave chocolate is the brain looking for an alternative source of serotonin, which chocolate happens to be rich in. The researchers also chronicled other hormonal fluctuations throughout the menstrual cycles of their test subjects, but claim that there is still a fair amount of research to be done in fully understanding the complexity of menstruation, hormone regulation, and changes in weight and food cravings.

As for Widmer's bar, it isn't available in the US yet — but don't give up hope! He is currently running a crowdfund to help get the chocolate up off the ground, which will hopefully allow him to expand internationally and get that period savior chocolate to you and your uterus sooner rather than later. In the meantime, we candle our periods the old-fashioned way — ibuprofen, Netflix, and cursing Poseidon for the waves of our menstrual sea.