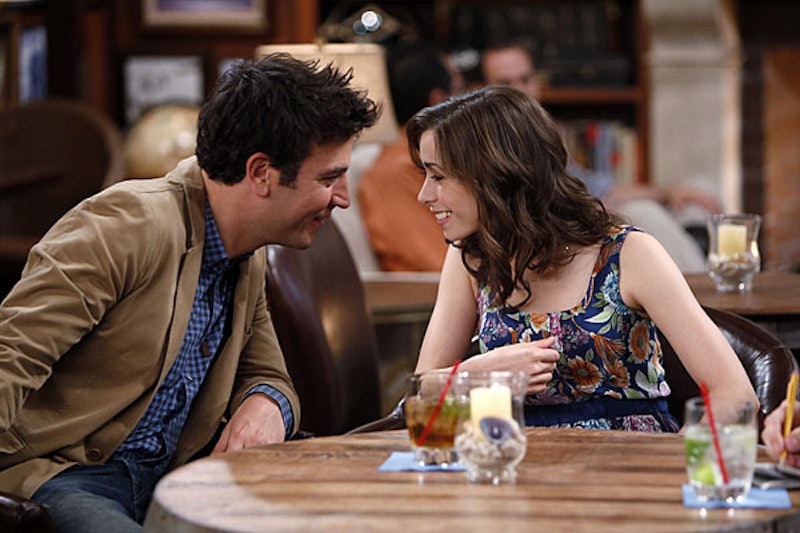 After nine years, How I Met Your Mother is finally coming to an ending, and we are finally going to see Ted meet the mother/learn her name. Fans have spent these last few years spinning wild HIMYM theories about who the mother might be, what might happen at the end of the show, whether or not the mother is dead, etc. Basically every theory that could be reasonably thought of is out there, but what about the unreasonable theories? Maybe HIMYM is going to throw a crazy wrench in the works and pull one of these out. (Hey, this show is known for its unexpected twists.)

1. THE MOTHER IS NOTHING MORE THAN THAT

Ted never actually calls the Mother his wife. So maybe the Mother is just that: the kids' mom. Perhaps she and Ted get divorced and that's why Ted recounts this story to his kids because they didn't grow up with her because she and Ted didn't stay together. Perhaps he's even telling it as a cautionary tale of why you shouldn't be so idealistic because you'll fall in love with a million girls and marry someone you think is right for you just because you want to want to be in love.

Ted doesn't have the best memory. He forgot Blah Blah's name until the show's final season, and most noteably he told an entire episode having forgot that Lily was pregnant at the time. He recounts how Barney preformed a magic trick of making a beer bottle float on Lily's stomach, later he realizes it wasn't floating at all, it was propped up by Lily's pregnant belly.

So what does this mean? This mean's Ted's an unreliable narrator and we can't really trust anything he has presented as fact. Maybe the actress playing the mother is actually someone else entirely and Ted is just recounting her youthful looks incorrectly.

3. THIS LADY IS ACTUALLY THE MOM

Ted having mixed up what the mom actually looked like as her younger self opens the door up for it to be someone other than Cristin Milioti. Who is it then? This lady:

Krirsten (a subtle reference to the actress who plays the Mother perhaps?) was just the right amount of annoying to be perfect for Ted. She was hyper sensitive about pronunciation, (like that of her ridiculous name: "The "i" goes before the 'r' and after the 'r'") just like Ted is about words like encyclopedia and renaissance. She's also working the pretentious angle talking about politics and podcasts, and we know Ted's all over that.

4. LILY IS THE ONE WHO DIES

The theory that the Mother dies is based on the scene where she and Ted get teary-eyed after she says, "what kind of mother misses her daughter's wedding?" The pause that comes after the statement made a lot of fans think the show was going to kill off the mom early on and she'd never make it to her daughter's wedding, but what if the couple is getting teary because Lily is the one who doesn't live to see her daughter Daisy get married. This would explain that while Ted looks sad, he's not inconsolably devastated. He's almost smiling a little. He is happy that he has his wife to support him through this time of losing his close friend.

5. BOTH BARNEY AND ROBIN DIE

Perhaps the couple dies in a car accident or something together. All I know is that in Lily's porch test scene (where she sees how Ted's girl du jour fits in with the group) neither Barney nor Robin is there.

6. SOMETHING HORRIBLE HAS HAPPENED TO TED

In Season 4 Ted gets into a fight and gets knocked out cold by Doug the bartender. What if everything that happens beyond that point he's actually in a coma, but when he wakes up hardly any time has passed and it turns out the whole story he told was a figment of his imagination while he slept in a medically induced coma. When he wakes up he has to live the next years for real still searching for his wife. (What? the show's creators said it was going to be heartbreaking.)

7. THE MOTHER IS ACTUALLY BARNEY'S SISTER

In Season 6 we learn Barney has a half sister named Carly, who is away at college. We know the Mother is in Ted's college class when she sees him for the first time so she'd need to be a student. Plus a long time ago before we meet the Mother, her roommate tells Ted that people are always falling in love with her. This isn't really confirmed by the Mother's perspective during the 200th episode. The way her roommate told it was every guy she brought home the Mother stole. But when we get to the 200th episode we see that the Mother doesn't actually date that many people. So who is the mystery roommate who people can't help but love? Well, probably someone related to Barney who's inherited some of his charm.

And after dying he was punished for his many sexual relationships so he gets sent to Hell where he's forced to tell a never-ending story to the children he never had. No? Too harsh? Okay.

Whatever the actual story is, I'm just glad we get to know the truth soon.