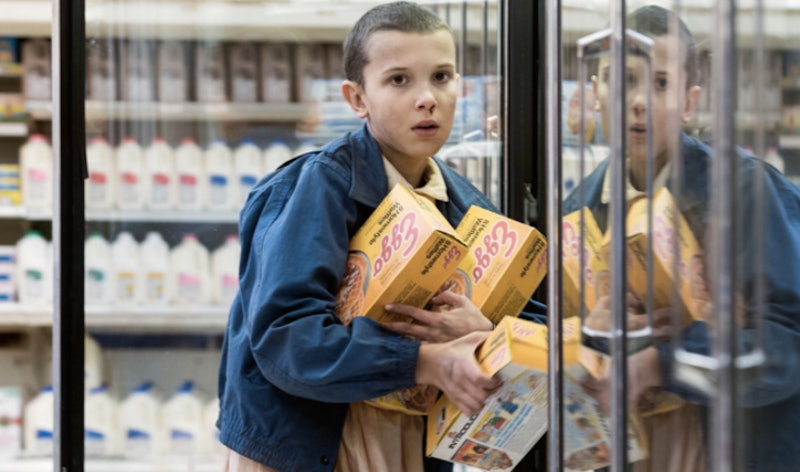 As they plow into production on the second season of Stranger Things , the cast continues to grow with exciting new additions. One new character, Roman, has just been cast and from a quick description, it sounds like she may be connected to fan favorite Eleven. Played by relative newcomer Linnea Berthelsen, Roman is described as "an emotionally damaged, magnetic young woman who suffered a great loss as a child. Although she does not live in Hawkins, she is mysteriously connected to the supernatural events at the lab." Not only does Roman sound very similar to Eleven in origin, Berthelsen appears to be around the same age as Millie Bobby Brown (who plays Eleven), which leads me to wonder whether Roman and Eleven were actually part of the same experiment group at Hawkins Lab.

Sure, we may not meet Roman at the Hawkins Lab but what if she escaped before Eleven did? Better still, if Roman is a supernatural young woman, then she may provide a link to Eleven that could help bring Eleven back from wherever she banished following the fight with the Demagorgon. Roman's appearance in the second season will surely keep the rest of the characters on their toes. We still have yet to truly understand what was happening at the lab but we do know it was supernatural and sinister. Roman could be the key to understanding both the events at the lab and getting a better grasp on Eleven.

As if that wasn't exciting enough, two other characters have been added to the Season 2 cast: Bob Newby and Dr. Owen. Bob will be played by Sean Astin and is described as "a kind-hearted former nerd who went to high school with Joyce (Winona Ryder) and Hopper (David Harbour) and now manages the local Hawkins RadioShack." So basically, Bob Newby is going to replace Barb when it comes to adorably lovable geeks. I'm game. Dr. Owen, played by Paul Reiser, sounds like he cuts a more ominous figure: " [He is] a high-ranking member within the Department of Energy on a "clean-up" assignment who is tasked with containing the events of last year." Clean-up duty is never an easy task but the mess that Eleven and the Demagorgon made goes far beyond the physical. Dr. Owen has a big job ahead of him, that's for sure.

Bob Newby and Dr. Owen sound cool and all, but let's be honest, folks: it's all about Roman. What kind of supernatural goodness is she going to bring to the second season of Stranger Things? Will she really bring back Eleven? Gosh, I hope so.