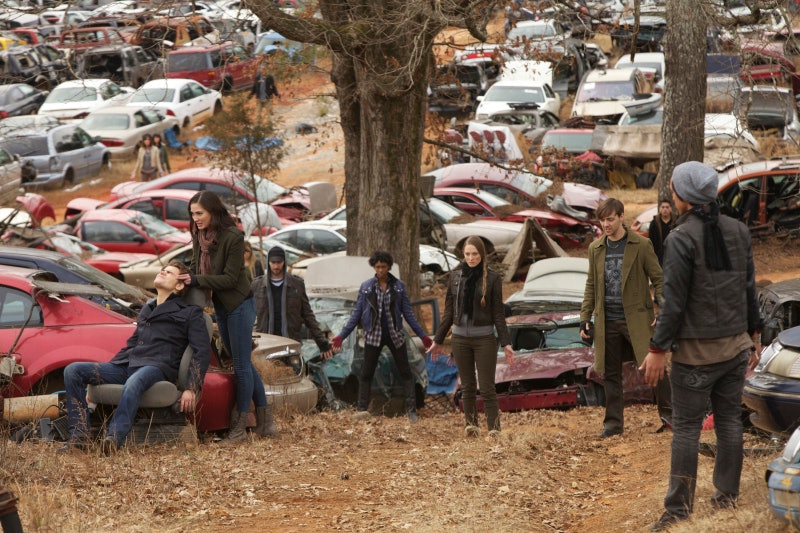 Last night's episode of The Vampire Diaries was particularly validating for me. Ever since the Silas/Amara debacle plot line, I've been waiting for (and whining out my theories about) Stefan's modern-day Doppelgänger. Hey, it only made sense: The Doppelgängers originated with Silas and Amara and the "shadow selves" have been appearing throughout history. It only makes sense that, if Amara has had no fewer than three Doppelgängers (Katherine, Elena and Tatia), Silas would have more than just Stefan. In fact, it's always been my theory that the Doppelgängers come in pairs, meaning that the world was due a Silas shadow self born at roughly the same time as Elena.

And…I was right. Enter Tom Avery. Tom is Stefan's modern-day Doppelgänger. Or, more accurately (SPOILER ALERT) was Stefan's modern-day Doppelgänger. In one of the show's less sensical subplots, Stefan is trapped by a large group of travelers who want to use his blood and Doppelgänger link to find Tom and kill him so that Stefan and Elena are the only two remaining Doppelgängers (I guess no other shadow selves ascended to vampire-dom). They send Caroline and Enzo off to do the deed, but Caroline wimps out because she's Caroline and she's unbelievably (no, really) good at being a good vampire. Luckily (or not, since the travelers are kind of loose canons), Enzo doesn't have Care's moral qualms and has no problem snapping Tom's neck. The travelers are big fat liars and don't let Stefan go after Tom dies (surprise, surprise).

It's so exciting and wonderful to have a TVD theory come true, even if I guessed nothing beyond the fact that Stefan must have another Doppelgänger (that's literally all I "predicted." And by "predicted," I mean "bored my mom and sister by rehashing the details of the Doppelgänger bloodline and speculating as to the years in which various Doppelgängers, seen and unseen were born to try to prove that there should be a living, human Stefan lookalike roaming somewhere.). In honor of my victory (give this one to me, please), I've decided to mesmerize you with other visions from my TVD crystal ball. Now close your eyes, let me rifle through some personal belongings (preferably Julie Plec's) and pay no attention to that man behind the curtain.

Damon and Elena will have sex at least one more time. Yeah, I know, I'm a maker of bold statements. Even though they're trying to stay apart and Elena is being all "strong" and driving herself back to school, and she's having sex fantasies about Stefan in the preview for next week's episode, I still believe these crazy kids will at least continue to hook up and, in the grand tradition of Taylor Swift's "22," it will be miserable and magical at the same time.

Bonnie or Jeremy will die again. Here's the thing: I never cared much about Bonnie or Jeremy until they died. But boy, when they died, I cared. The show did a great job of making me care about Jeremy in the episodes leading up to his death (and, as a result, I should have seen it coming) and an even better job of making me believe it would never, ever get rid of its resident super witch/deus ex machina, Bonnie. But TVD's writers kill off both of them and, by the time it happened, I was sad (not like, Alaric sad, but that would be IMPOSSIBLE). The show lost some of it's spunk about killing off major characters though and brought both of them back, in their own weird supernatural ways, and I no longer care what happens to either of them. My prediction: I'll start to care again, and then one of them will promptly die for good.

Caroline will sleep with at least one more accent-wielding vampire before settling down with Klaus (NOT TYLER). Caroline sure does have a thing for the bad boys, but especially for the ones with accents. She must have some Brit-hooking pheromones, because Enzo was almost as flirty as Klaus was with her (no one could ever out-flirt Klaus when it comes to Caroline). I predict that the show will pair her with at least one more out of towner before temporarily reuniting her with Tyler so she can break his heart really good when she leaves for Klaus in the end (did I mention these predictions are a liberal mix of what I think will happen and what I want to happen?).

Katherine will return. Because Katie P is a survivor, that's why.