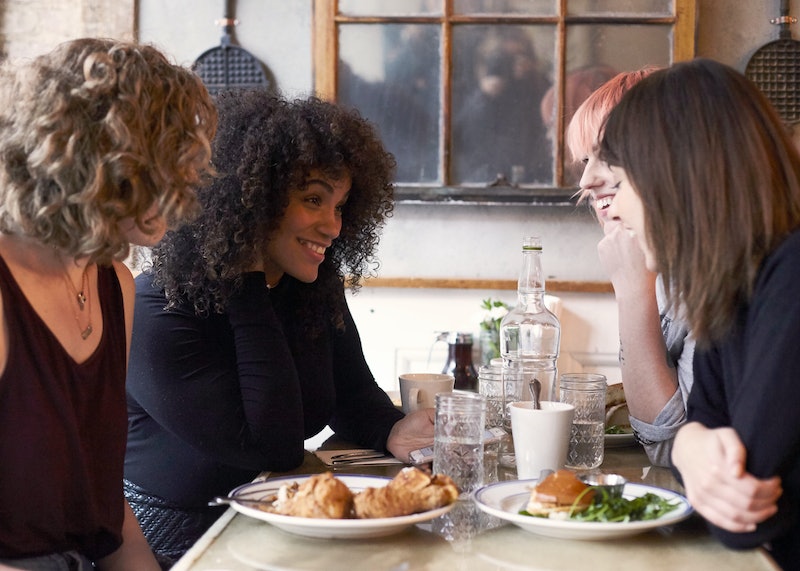 Chances are, you've probably heard of the expression, "You are the company you keep" before. It typically mean the social circle you hang out with tends to reflect your own personality, and vice versa. Regardless of whether this is true, have you actually ever wondered what your friendships say about you? As it turns out, there is a good deal of research examining how our friendship habits tie into our personalities, likes and dislikes, and more — and all of it is fascinating.

As social as I like to pretend to be sometimes, I don't actually have a lot of friends. Instead, I have very close connections with the few friends that I do have, and I tend to keep in touch with people for a long time. Like, years. If we're not counting relatives (because two of my closest friends are family), then I can count the number of "close friends" that I have on one hand.

Interestingly, I've observed that my habits do tend to tie in with the Myers-Briggs personality inventory. I usually hover somewhere in the middle of the extroversion/introversion scale (it differs every time I take the test); sometimes, I crave social connection and draw a lot of joy from being with others, while others, I feel really drained and have the need to recharge on my own. Last time I took the Myers-Briggs test, I'm tipped slightly toward extroversion. And it's true: I have gotten increasingly more social and gregarious over the last couple of years. The funny thing is that if I'm surrounded by a group of extroverts, no matter what, I'll start to talk less and subconsciously mold my personality to fit the social dynamic.

Of course, no single friendship or series of friendships can predict exactly who you are. At the same time, science gives us a window of insight into our natural tendencies and basic personality quirks — some of them may surprise even you. Here are just a few things that your friendships might say about you:

If You're Less Social...

Have you ever wondered why your social circle is a lot smaller than other people's? I have. And it seems like I finally have the answer why: Research suggests that intelligent people have fewer friends. OK, while I don't want to toot my own horn here, this is science!

This particular study looked at the relationship between a lot of different factors, including intelligence, population density, friendship habits, and personal happiness. Some of their findings make a lot of sense. For instance, researchers found that socializing with friends is related to greater happiness. Also, the denser the surrounding population is, the less satisfied you might be with life.

But here's the somewhat surprising part: According to the study, "More intelligent individuals experience lower life satisfaction with more frequent socialization with friends." What this basically translates into is, smart folks don't get a lot of joy from hanging out with friends. This goes beyond the idea of introversion and extroversion.

Here's the silver lining: The results are based on the theory that people who have higher intelligence prefer to focus on long-term projects, and socializing with friends can be a distraction to that. So maybe take this as a compliment?

If You Have Long-Distance Friends...

You're generally open to experience.

Like I mentioned, I'm the type of person who appreciates friendships that last regardless of time or distance. I could go three months without seeing or talking to one of my best friends (the one I'm thinking about lives four states away), yet it'll feel like no time has passed during our next reunion.

At the same time, I'm pretty good at being sociable with new people, particularly online. As a kid, I made really, really good friends through virtual reality games like Gaia Online and Runescape (don't judge me!), people who lived in Denmark and Finland.

As it turns out, people who have a more open personality tend to have friends who live farther away and, as a result, see them less often, according to recent research from Social Psychological and Personality Science, which explores how our personality traits (specifically the "Big Five" traits — openness to experience, neuroticism, conscientiousness, agreeableness, and extroversion) and how they affect our friendships. Additionally, people with an openness to experience tend to have a more diverse set of friends (particularly those of a different gender and ethnicity) and friends who aren't relatives.

Research shows that open people tend to hold more liberal values and accept of people from all backgrounds, as opposed to being racist or xenophobic. The study also notes a couple reasons why people open to new experiences may have more LDFs (long-distance friendships): They naturally may be up for traveling or moving more often, and they probably find it easier to connect with people online.

Hmm. This makes me want to hunt down my Neopets BFF.

If You're One Of The Popular Ones...

You probably care about social structure.

Confession: My high school afternoons were spent in Chess Club and Anime Club. I have absolutely zero experience with being popular, so I'm afraid I don't have any interesting anecdotes to fall back on for this one. But I have always wondered how the Regina Georges and Claire Standishes of the world gain their popularity status and rise up to the top of their schools' social ranks.

If you fall into the same category as folks who are really popular in school or at the office, you're actually similar to other popular people in one way: You all care about likability and social structure. In a study published in Proceedings of the National Academy of Sciences, 26 members of two student clubs were shown photos of one another. When students perceived their peers as being popular, the "reward" system in their brain became more active, regardless of how much they liked those peers themselves.

Interesting, right? The researchers concluded that this probably explains why we gravitate toward popular people and give them attention even if we don't actually think they're easy to get along with. The study also showed that people who've made it to the top of the social ladder seem to really enjoy affiliating with other people who are in the "popular" crowd.

Of course, none of these indications are a bad thing, not by any means. To some degree, we all wish to be liked by other people. Whether your friends live close by or they're just a Facebook message away, it's important to have people in our lives who enjoy our company.