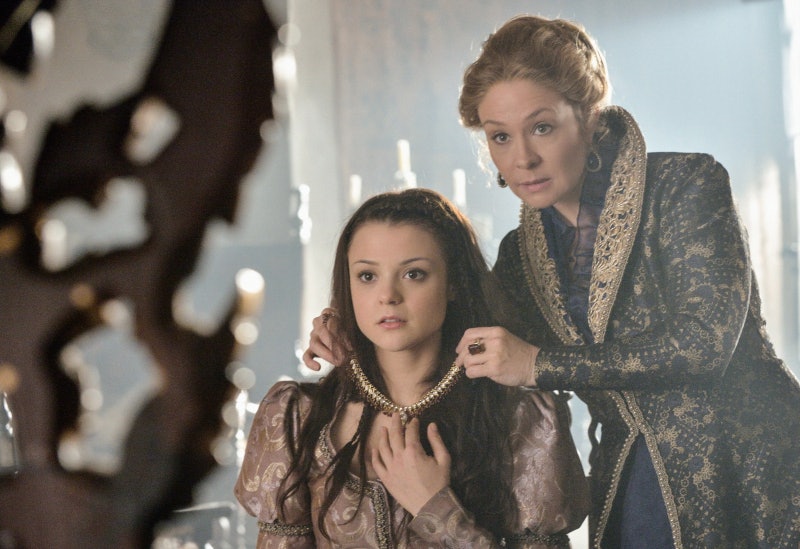 It looks like King Henry might have found his Anne Boleyn. Yes, I know it's the wrong Henry, the wrong monarchy, the wrong everything, but bear with me. Last week, Reign went boy crazy. This week, in "Monsters," a Reign boy went full crazy. That "boy" is full-grown, uber-powerful man child King Henry, who has gone a kind of crazy that involves bloodshot eyes, demanding that his daughter-in-law/fellow monarch role play sex with a woman but pretend that woman is her husband/his son and forcing his mistress and bastard son into marriage.

It's a really specific kind of crazy.

The plot setup for the episode is that it's time for the castle's annual Bean Queen festival, in which one servant girl in the palace (the one who finds a bean in her piece of cake - not making this up) gets to be queen for a day, wearing the queen's crown, dressing in gowns and, if she's hot enough, banging the king. This year's Bean Queen is Penelope, who acts like an innocent, naive virgin, but doesn't turn out to be any of those things.

Penelope is very pretty (in a very Natalie Dormer kind of way, which is just more proof that she's Reign's Anne Boleyn) and Henry instantly wants to sleep with her. Catherine, being the cunning lady she is, tries to use Penelope to help her drug the king to calm his crazy. She asks her to drug his wine and urges to "think long-term," promising to keep favoring her after the Bean Queen festival day has ended.

Well, the "think long-term" advice really resonates with Penelope, who figures out that the drug is because the king is mad (after he tries to force Mary to have sex with Penelope as if Penelope is Francis) and decides to use every piece of knowledge she has to her advantage.

She knows that the king is crazy and paranoid, so she tells him about the queen's request to gain his trust. Then, she helps him drug Catherine with the stuff she was supposed to use on him, leaving him insane and Catherine incapacitated.

She knows that confidence is key and doesn't pretend to be meek once she gets anything resembling an upper hand. She's not afraid to demand that Henry follow her lead in bed or that Catherine relinquish her seat at the throne during her day as Queen Penelope. That sexy confidence is sure to win her a spot as the king's favorite mistress, to say the least (there's less competition, now that he's forced Bash to marry Kenna). And, with the way the king has been making decisions lately, it wouldn't surprise me if he didn't try to weasel her onto the actual throne as his real queen before the season is over.