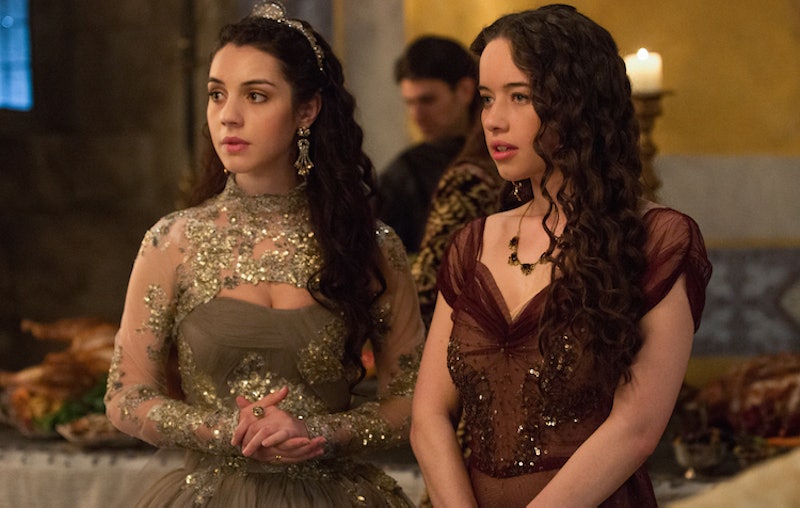 This week, Reign brought "The Darkness." What is "The Darkness" exactly? Mostly, it seems to be the fact that the king has decided to become a homicidal prick. He now has two dead mistresses under his belt, and he's admitting that it wasn't totally (or at all) by accident either time. Ruh-roh. This change of pace does not bode well for Kenna, who is still the king's mistress until she picks a suitor.

Speaking of suitors, boy craziness is all the buzz in the world of Reign. Now that Mary is hitched, the fad is officially started, even though everyone has their own reason to want to tie the knot. Between the ladies-in-waiting, the royals and the kingdom outcasts, we have the makings of a full-on girls only desperation March Madness bracket.

Mary vs. The Dead Prostitute

Why they're desperate: Mary needs to get pregnant, and STAT, if she wants to fulfill her queenly duties. Meanwhile, her BFF lady-in-waiting, Lola, is already pregnant with Francis' child after their one-time tryst. If she doesn't help Lola get married ASAP, the truth of the pregnancy will come to light, and no one wants that.

The dead prostitute is just dead, so she already lost. RIP, prostitute. You deserved better.

Why they're desperate: Kenna needs to find a suitor she likes now more than ever. She's been toying with the king, telling him to bring her suitor after suitor until she finds The One. In exchange, she's his willing sexual play thing. She needs the king's help to find a match since everyone in French Court knows she's his mistress and not the purest gal in town. To make matters worse, he's become really rough with her, is forcing her to have sex with other women against her preference and he's taken up the habit of killing his mistresses for kicks.

As for Rownan, the girl Bash hooked up with on his way out of town, she's got some Pagan voodoo that may or may not be real to contend with.

Why they're desperate: Lola needs to find a man. She needs to find one fast. Like, two months ago fast, to be exact. She's pregnant with Francis' child and it's putting her position in court, her friendship with Mary and her chance for a future at risk. Catherine has to cover up Henry's murders…indefinitely.

Winner: Lola. It might seem like the Queen has bigger struggs than little Lola, but given her history of coverups, it's actually not that taxing.

Why they're desperate: Greer is conflicted. She's in love with her servant boy lover, being courted by a lord and just received word from home that she's been matched with someone for marriage. Basically, too many guys, not enough time.

Olivia on the other hand, is wandering around in the snow like a crazy person and blabbering on to Nostradamus about something terrible. Nothing good can come of this kind of crazy talk.

Winner: Mary. Olivia's life may suck right now, but if she can make it through the crazy to the other side, she still has a chance at a decent, normal life. If Mary can't sort out her problems, she risks a wave of repercussions not just for her (which would put her own life at stake), but for all of Scotland. It's hard to beat out a whole country's well-being on your shoulders.

Winner: Kenna. This was a really tough one. Yes, Lola failing to find a man will leave her shamed and under the control of Francis, who, as the royal father of her child, will basically be her master forever. She'll be forced into the life of a mistress and she'll never have a chance at true happiness or a family of her own.

On the other hand, if Kenna doesn't find a husband soon, the king will probably murder her during sex. So, yeah.

Winner: Mary. If Kenna weren't so conniving and hadn't brought so much of this on herself, I might be inclined to give the victory to her, but Mary's plight, again, involves an entire country. Also, if she fails in fulfilling her wifely duties and Lola's secret is revealed, we'll lose the adorable wonder that is Mary and Francis during their happy times. And that would be a tragedy for all of us.