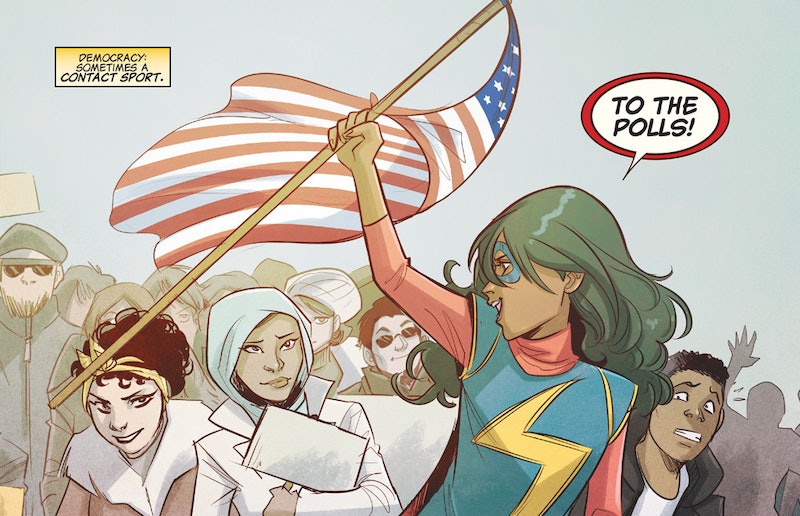 Election Day is finally here, and all the real-life Avengers are hitting the streets and spreading the word. President Barack Obama, First Lady Michelle Obama, Vice President Joe Biden, Former President Bill Clinton, Jay Z, Beyoncé, Katy Perry... everyone wants *you* to get out there, vote, and make history. Even superheroes are getting in on the action: Ms. Marvel encourages Americans to vote in a forthcoming comic, Ms. Marvel No. 13, out Nov. 30.

Ms. Marvel, aka Kamala Khan, made her debut in Aug. 2013 in Captain Marvel No. 14, and in Feb. 2014, she officially took over the Ms. Marvel franchise. She was the first Muslim character to headline a Marvel comics — which makes this particular comic all the more important. Since he announced his candidacy for president in 2015, Donald Trump has become embroiled in a series of race-related controversies; he called for ban on Muslims and publicly quarreled with Muslim-American Gold Star parents Khizr and Ghazala Khan.

In this sneak peek at Ms. Marvel Nov. 13 (reprinted with permission from Marvel,) Ms. Marvel implores people to vote the good ol' fashioned way: by knocking doors in her Jersey City neighborhood. Take a look below:

Reprinted with permission from Marvel. These are pages from Ms. Marvel No. 13 by writer G. Willow Wilson and artist Mirka Andolfo. (Marvel)

More like this
The 50 Most Powerful Characters In The Marvel Universe, Ranked
By Johnny Brayson and Nola Pfau
This Episode 6 Moment Foreshadows Viserys' Fate On 'House Of The Dragon'
By Grace Wehniainen
Nicola Coughlan Shared A Lady Whistledown Excerpt From ‘Bridgerton’ Season 3
By Grace Wehniainen, Alyssa Lapid and Sam Ramsden
Read The First Pages Of Emma Rosenblum’s Highly Anticipated Debut, 'Bad Summer People'
By Samantha Leach
Get Even More From Bustle — Sign Up For The Newsletter