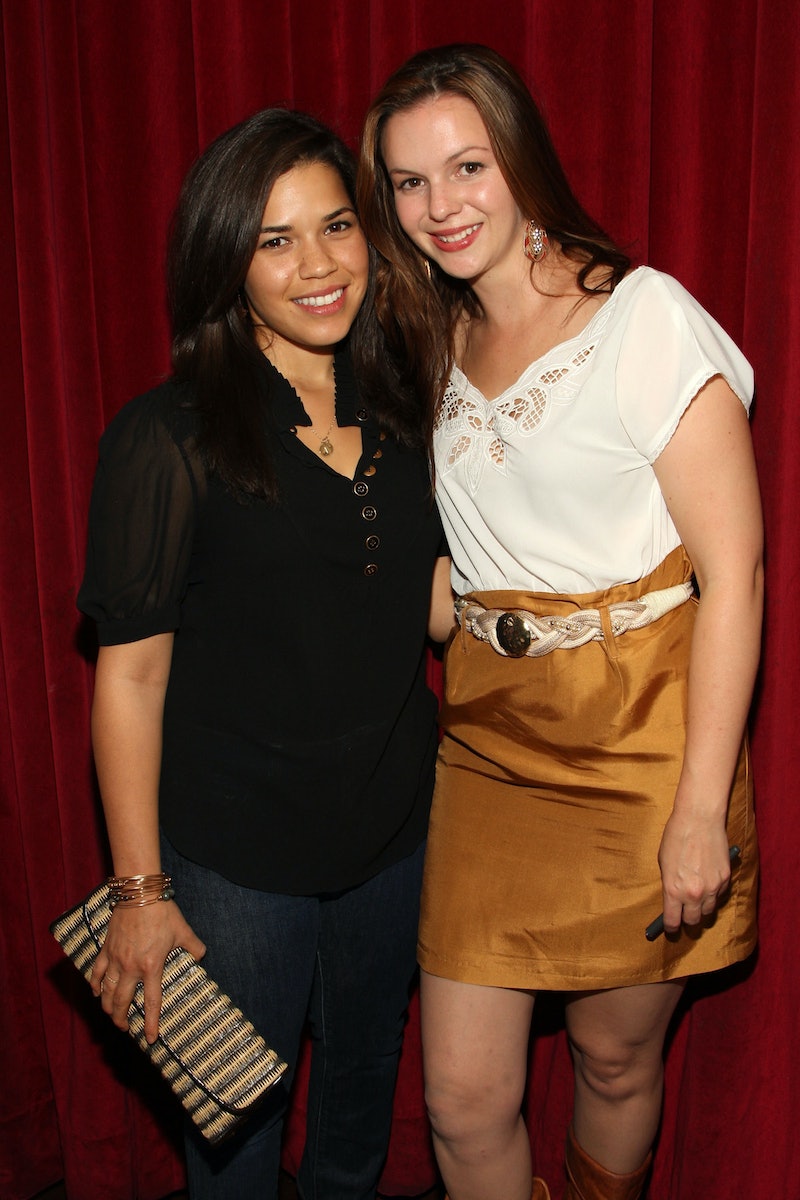 While many of us are getting out to vote for the next president and vice president of the United States of America, there's a certain celebrity duo that is proving their unwavering stance this Election Day. America Ferrera and Amber Tamblyn supported Hillary Clinton on Instagram — and this isn't the first time. The two longtime besties have been on the road stumping for Clinton in the final weeks of the 2016 campaign. On Tuesday, Tamblyn shared an Instagram collage to remind fans that both she and Ferrera have never stopped supporting their candidate of choice. By this point, they're practically the Sisterhood of the Traveling Pantsuits.

Tamblyn's photos show herself and Ferrera, pictured at two different times campaigning for Clinton. In the top image, Ferrera is speaking to a crowd while Tamblyn looks on. In the background, you can see the Clinton posters from her 2008 presidential campaign. In the bottom image, you once again see Ferrera and Tamblyn in front of the Clinton/Kaine campaign poster, smiling from the podium. The caption is perfect: "Always with her." In one perfect image, Tamblyn illustrates that she has never doubted for a second who should rightfully take up the mantle of president.

Ferrera and Tamblyn, in a funny sort of way, have channeled their real-life bond of sisterhood (which first took root onscreen during the Sisterhood of the Traveling Pants franchise) into showing their constant support of Clinton through the years. It's powerful to see two young women who have never been swayed, never questioned, and never separated themselves from the one person they want to see in the White House.

Better still, it's been exciting to watch Ferrera and Tamblyn document their 2016 stumping efforts on social media. Both women have been active not only in voicing their unabashed support for Clinton, but they've taken moments to poke fun at Donald Trump by trying to remind voters just how absurd he can be. How have they done it? Dubsmash, of course. Take a look below to see just how silly they can get.

Ferrera has spoken out against Trump, ever since his detrimental mischaracterizations of Latinos went viral early in the campaign. Tamblyn, on the other hand, has voiced her own rebuttals of Trump on women's issues, especially around sexual assault, in essays and on Instagram. Tamblyn spoke out about own her alleged assault and why Trump's views on women would be disastrous for the nation. Both women have used their platforms to relate the personal to the political and, in doing so, have shown their fans (many of whom are also voters) that there is, and always has been, one clear choice on who deserves the presidency. When it comes to sisterhood, these two are by Clinton's side.