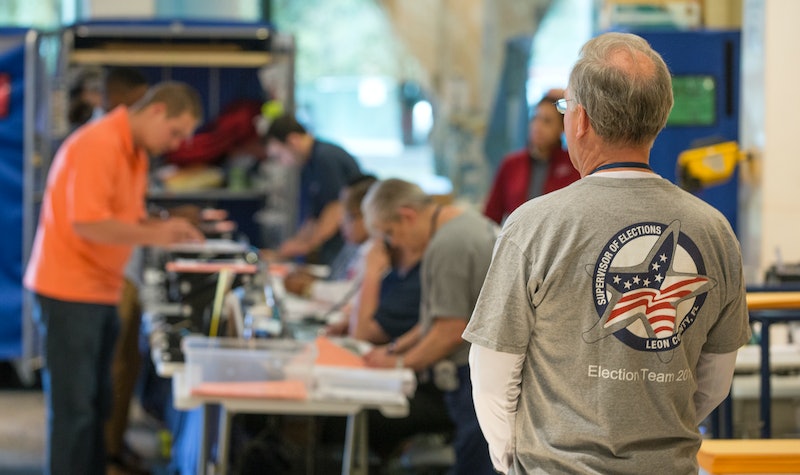 As polling places closed and votes were tallied around the country, many looked to the Sunshine State as perhaps the strongest barometer of the evening's overall outcome, as well as the general outlook of voters across America. Florida ranks third in terms of electoral votes, boasting a massive 29 electoral votes total. (It's tied with New York.) Though California and Texas can claim an impressive 55 and 38 electoral votes respectively, rarely are the two in play. For Florida, which has a topsy-turvy history in the general election, it's almost anyone's guess whether the nation's largest battleground state will skew Democrat or Republican. Florida exit polls show an incredibly close race and, perhaps most revelatory, a drastically changing voter demographic.

According to exit poll data obtained by ABC and NBC, preliminary exit polls indicated an even higher uptick in nonwhite voters than the historic numbers seen during the 2012 election. Specifically, 40 percent of overall voters polled were minorities, including a staggering amount of women. In fact, more women than men appeared to be casting their ballots, with a majority of both women and nonwhites favoring Democratic nominee Hillary Clinton. It appears as if voting is down four points for White evangelical Christians, snapping a two election streak of 24 percent of voting Floridians claiming that religious affiliation.

Regarding top issues, NBC News' exit polls show that 48 percent of Floridians polled consider the economy to be the most important issue facing the country, with a quarter of those polled citing terrorism, 12 percent choosing foreign policy, and just nine percent picking immigration. Though not considered the highest priority among Florida voters, exit polls indicate an increase in concern over climate change. 66 percent of voters polled believing that global warming is a severe problem, with a dizzying 90 percent of Clinton supporters concerned about fossil fuels and the negative human impact on the environment. Trump supporters were far more split, however. 42 percent considered climate change to be a severe problem, while 54 percent do not.

Though much can be said for Democratic and Republican voters, little has been discussed in exit polls regarding independent voters and those who've cast their ballots for third party candidates. It bears being mentioned the razor thin margin between Trump and Clinton is far smaller than the overall amount of votes for Green party candidate Jill Stein and Libertarian candidate Gary Johnson. As of this writing, 2.2 percent of voters are supporting Johnson, or slightly over 195,000 people. Stein has less than a percent of the Florida vote, though over 60,000 people are supporting her. Compared to the 2012 election, in which Johnson received 44,726 votes and Stein received less than 9,000 votes, the 2016 election points to an increase in visibility and legitimacy for third party candidates. Whether Trump or Clinton win the Sunshine State, one thing is clear: the times, they are a-changin'. And so are the voters casting their ballots.