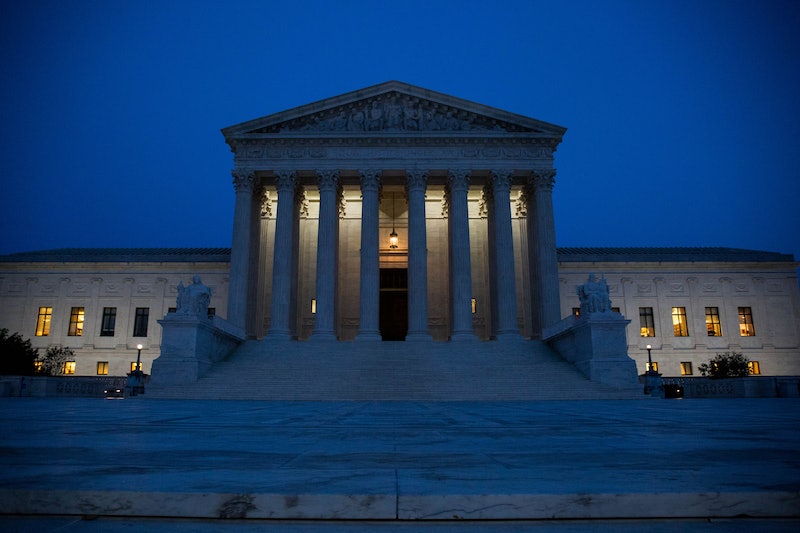 With Donald Trump being very close to being declared the next President of the United States, let's just have a moment of silence for women's rights. There is a good chance that you are now in shock, wondering if Roe v. Wade will be overturned if that he's in office. After all, Trump has made his pro-life views extremely clear. Women should be highly concerned. Update: According to the Associated Press, Donald Trump has been named President of The United States.

Earlier: A major component of Trump's agenda is the attempt to reverse Roe v. Wade, a decision by the United States Supreme Court that guarantees women the constitutional right to make their own decisions regarding abortion. It was released in 1973, but remains one of the most important issues ever decided in the Supreme Court. And it's only about to get more intense.

It's not clear what a Trump win could mean for Roe v. Wade, but there's a high possibility it wouldn't mean good things. Trump is all about appointing pro-life judges to the Supreme Court. And, as the remaining judges age and pass away, this becomes more and more of a possibility. As a result, abortion laws will be left to the individual states, paving the way for a lengthy process of new legal structures and rules. And it may not always be in the favor of a woman and her rights.

So could Trump overturn Roe v. Wade? We won't know for sure until the race is called and the official president-elect actually starts making moves, but it is possible. And if it did happen, it wouldn't happen "automatically" like he said it will. Here's a little bit of hope, though: Roe was decided by a Republican-nominated Supreme Court. Let's keep our fingers crossed.

More like this
Any Of These 45 Cheap Things Could Make You Look So Much Better
By Mackenzie Edwards
24 History-Making Black Women You Probably Didn't Learn About In School
By Ayana Lage and JR Thorpe
Gillian Anderson's New Netflix Drama Is *Nothing* Like 'Sex Education'
By Frances Stewart
Matt Hancock’s TikTok Is The Most Matt Hancock Thing Ever
By Sam Ramsden
Get Even More From Bustle — Sign Up For The Newsletter
From hair trends to relationship advice, our daily newsletter has everything you need to sound like a person who’s on TikTok, even if you aren’t.