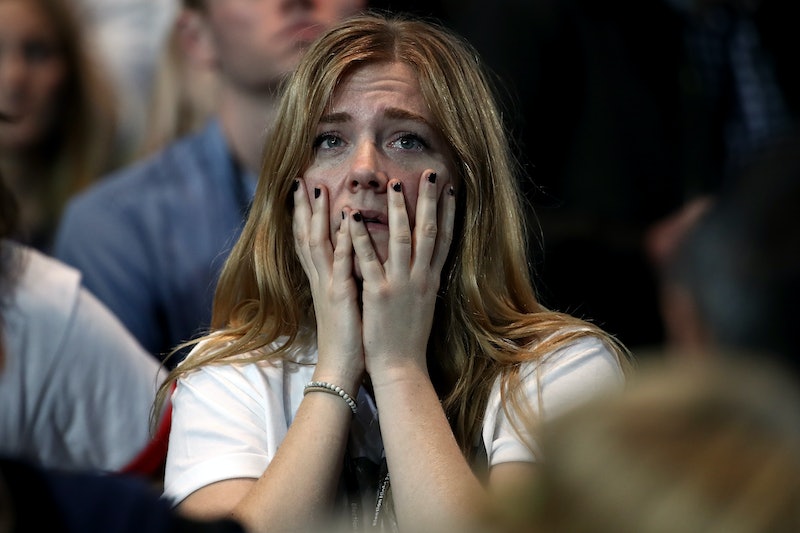 Last night, privileged American liberals — white, nondisabled, middle class to wealthy, straight, cis, highly educated liberal voters — got an incredibly painful wakeup call. Months — and years, really — of warnings that America was turning into an intolerant, xenophobic place finally bore fruit in a horrifically ugly way. Far from being a romp, the presidential election turned out to be a long, painful slog as Secretary Hillary Clinton's path to 270 slowly grew narrower. It turned out to be a pretty effective referendum on what America really is, and the results seem to have genuinely shocked many comfortable white Americans who voted against Trump.

I wasn't shocked. Like more or less everyone on my Twitter feed, I felt gradually hollowed out and sickened as I watched the numbers come in last night, but it was more like an unpleasant confirmation of something I already knew deep inside. Last night's election was the pathologist's report on the lump privileged American liberals already knew was cancerous, but refused to admit, despite being repeatedly told to do something about it.

Let me be clear: President-elect Trump's policies will kill people. I don't mean figuratively, I don't mean in the vague abstract. I mean that, with the help of a Republican Congress, he is going to lay waste to decades of hard-fought progress, and he will push through fatal policy initiatives, backed by Supreme Court rulings that will take decades, and probably centuries, to undo. We are going to lose healthcare, we are going to lose civil rights, we are going to lose progress on climate change, we are going to watch the economy collapse. Gutting ACA and Social Security will endanger disabled people. Promoting transphobic policy will put the trans community at risk. Dismantling the Department of Justice will reverse progress on police reform and the safety of people of color. Denying entrance to refugees and immigrants will force them back into countries where they fear for their lives.

Let me also be clear about this: You were warned this could happen.

Well-meaning privileged Americans expressed shock and surprise last night that such a thing could happen. The rest of us took a more fatalistic view: It would sure have been nice if privileged America had taken a stand against its more bigoted members, but it wasn't shocking that people failed to do so.

In the last decade, we have seen the fight for equality made more and more public. We elected a biracial president. Immigrants became more visible, more active, and more defiant. The trans community emerged from the shadows. The Supreme Court legalized gay marriage. Disabled activists grew more aggressive about pursuing policy initiatives. Muslims and Jewish people stood their ground against hatred and intolerance. We did this knowing it was a risk, but knowing that the price of silence had grown too painfully high. We did it because, as ACT UP! said in the 1980s at the height of HIV/AIDS activism, "SILENCE=DEATH."

But it turns out that the price of being visible was high, too, because this entire election year has been about backlash. The ugly, vicious backlash against minority communities demanding to be treated like human beings.

In many ways, this was an election about whether you think people who do not look like you are actually people. The cornerstone of the Trump campaign, and the hatred it drove, was based on the notion that the Other is dangerous and scary. Whether he was railing against refugees or suggesting a ban on Muslims or talking about grabbing people by the pussy, he was drawing bright, bold, angry lines. Us and them lines. Secretary Clinton's "Stronger Together" campaign, by contrast, was aggressively diverse, making an active effort to reach out to people who weren't like her. It was proudly idealistic.

I saw lots of people last night saying "not my America," but that's the problem. This is your America. This is our America. America is racist, transphobic, Islamophobic, xenophobic, homophobic, misogynistic, disablist, and vile.

This was not just an abstract rhetorical war. Aside from the myriad attacks on personal and civil rights that have characterized American legislatures recently, since the election of President Obama, the right has been steadily working to erode access to voting rights, between the gutting of the Voting Rights Act at the hands of the Supreme Court and the slew of laws specifically designed to suppress turnout. Not just to suppress turnout, but to specifically suppress turnout of people of color, zeroing in on the Black and Latinx communities to abridge their voting rights. That sequence of events may have been responsible for what happened last night in a number of key states, though it will take months to fully quantify the effect of de jure voter suppression on the vote.

Well-meaning privileged Americans who supported Secretary Clinton and worked on progressive causes expressed shock and surprise last night that such a thing could happen. The rest of the anti-Trump community took a more fatalistic view: It would sure have been nice if privileged American liberals had taken a stand against the country's more bigoted members, but it wasn't shocking that people failed to do so. Those demands to "make America great again" came from a place of deep fear and hatred, but it was also a place that was heavily cultivated and tolerated by privileged America, from not turning out for midterm elections to simply trashing Trump supporters instead of recognizing their danger.

I don't have sympathy, or empathy, for Trump supporters, but I do understand them. I understand them because they and people like them have been dehumanizing me for my entire life, and because their attitudes run deep and are part of the fabric of America. I saw lots of people last night saying "not my America," but that's the problem. This is your America. This is our America. America is racist, transphobic, Islamophobic, xenophobic, homophobic, misogynistic, disablist, and vile.

That is America. And now that Trump voters have brought you up to speed, perhaps you'll start taking us seriously, and work with us as we attempt to get ahead of the horrific damage done by this election. The clock is ticking, and on January 20, 2017, you're going to find yourself living in the America we've inhabited all along.

More like this
I'm A Shopping Editor & I Love These Cheap Clothes On Amazon That Look So Freaking Good On Everyone
By Allison Bolt
The 8 Best Headphones For Pelotons
By Megan Gray
The 7 Best Aloe Vera Gels For Hair Growth, According To Experts
By Megan Gray
If You Have Any Of These Gross Problems Around Your Home, You'll Wish You Knew About These Clever Things Sooner
By Mackenzie Edwards
Get Even More From Bustle — Sign Up For The Newsletter