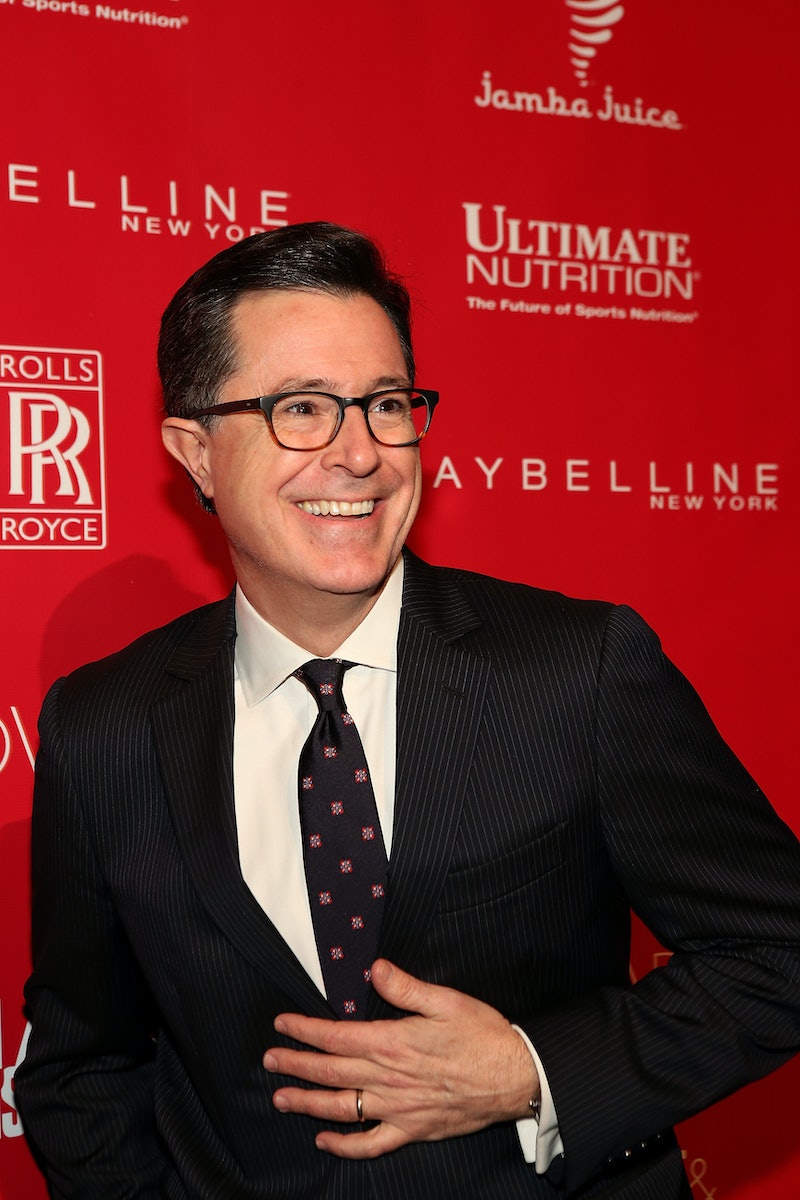 In this Internet age, we have seen online activism spark debates over sexism, racism, homophobia, and a plethora of widespread social concerns. Hashtags like #rapecultureiswhen, #feministselfie, and #hoodiesup help draw attention to injustice, or simply create a space online for marginalized groups to speak up and speak out about problems that are all too often ignored by major media outlets. One of the latest hashtag controversies? #CancelColbert. It's a surprising trending topic to see on Twitter, though not so surprising when you consider what inspired it: a racist-seeming tweet from The Colbert Report ’s Twitter account.

But let's rewind. The tweet itself — “I am willing to show #Asian community I care by introducing the Ching-Chong Ding-Dong Foundation for Sensitivity to Orientals or Whatever” — was referencing an excerpt from a bit criticizing Washington Redskins owner Dan Snyder's racist and patronizing response to the public's insistence that the team change its offensive name. In an open letter, Snyder wrote,

For too long, the struggles of Native Americans have been ignored, unnoticed and unresolved...As a team, we have honored them through our words and on the field, but now we will honor them through our actions...[O]ur team name captures the best of who we are and who we can be, by staying true to our history and honoring the deep and enduring values our name represents.

On the show, Colbert was clearly satirizing racial stereotypes when he joked in response, “I am willing to show Asian community I care by introducing the Ching-Chong Ding-Dong Foundation for Sensitivity to Orientals or Whatever.” The line was then tweeted by the show’s account, and, when taken out of the segment, read as horribly racist. But whereas mega-millionaire Snyder actually believed his words were right and fair, Colbert's were purposefully outlandish in order to draw attention to just how equally horrendous Snyder’s letter was.

That said, the controversy does bring up an important conversation surrounding intention and context within comedy. Comedians are able to unleash truly hideous thoughts and jokes both in and out of context. And they are almost always forgiven for it.

Just look at the Daniel Tosh rape joke controversy that erupted in 2012. During a stand-up gig, a female audience member protested to an inappropriate joke Tosh told about rape. Tosh paused for a moment and then responded, “Wouldn’t it be funny if that girl got raped by like, five guys right now? Like right now?" By making light of sexual assault while seated in a position of white male privilege, Tosh only contributed to the rape culture that we all live in. Both in and out of context, that “joke” wasn’t funny. And that’s where the problem lies — with Tosh and the handful of fellow comedians (pretty much all white guys) who came to his defense with the battle cry, “IT’S COMEDY.”

Satire and caricature are a safe place for playing out terrible behavior in order to mock it, but the Tosh incident called into question whether white men playing inflated versions of terrible white men dissolve the problem or add to it. Will Ferrell and his über-popular Anchorman series are similarly problematic. When the film's sequel was released last summer, it came chock full of racist comments about Ron Burgundy's African-American boss-turned-girlfriend Linda, played by Meagan Good. Was Ferrell — who, following the film's release, was never subject to #FireFerrell hashtags — making fun of racists, or only making racism funny? Are Ferrell and Colbert doing us all a service calling out ridiculous claims made by guys like Snyder, or moments in history when people were (and continue to be) marginalized for their race and sex? Either way, is that effort tainted or even undermined by the fact that they are able to do it because they are white men?

To help answer that question, let's consider a female comedian, Sarah Silverman— a comedienne, on the other hand — whose jokes also piss off plenty of people. Silverman talks about her vagina frequently, has made her own share of rape jokes, and drops the c-bomb the way most kids overuse the word “like.” But Silverman’s persona onstage is not a far cry from who she is in real life. She doesn't impersonate misogynists to skewer misogynists. She plays a feminist skewering misogynists.

The beliefs she espouses onstage — that women’s sexuality should be talked about openly, that women are treated unfairly on a daily basis — are hers as well. She's not making fun of those ideas. With her offensive or “tasteless” style, she isn't lampooning offensive, tasteless women — she's rejecting the idea that women have to behave. And when she talks about rape, she’s calling out the rapists and rape culture. When Tosh talked about rape, he shamed the victims and promoted the already deeply-embedded culture of rape — perhaps without even knowing it or “intending” it.

So, our response to #CancelColbert shouldn’t be “Ugh! It was a JOKE everyone! Get over it!” (And it definitely should not be to direct anger towards Suey Park, the woman who started the hashtag and has been subject to racist slander ever since. How is it okay to be nasty to those who speak up when they recognize injustice?) Because that doesn’t address or resolve any of the many problems at hand. Do I think Stephen Colbert is a racist? Nope. Not one bit. It was a social media mistake — some jokes translate in 140 characters and some especially do not. The controversy reminds us that there are different kinds of comedy. Some of which involves miming intolerance in order to mock it, which is very tricky territory to tread. It allows the comedian to ever so lightly, and ever so briefly experience the despicable but nonetheless heady power of the majority battling the minority. And yet, it also undermines that power.

The Colbert tweet was unfortunate, especially in light of how few Asian-American comedians you see anywhere. Late night, sitcoms, Saturday Night Live... there is a staggering void. So, no, the #CancelColbert responders weren’t overreacting. They were calling out the deeply rooted racism in the media toward Asian-Americans of which the Colbert quote, tweeted out of context, was a stellar example. But, to be fair, Stephen Colbert was also calling out that racism.

I imagine Colbert will respond in a heartfelt and intelligent way — after all, Colbert, the human person, is nothing like Colbert, the character he plays on TV. Snyder, on the other hand, well, I imagine he’ll continue to operate as he has all along. Which isn’t good for anyone.