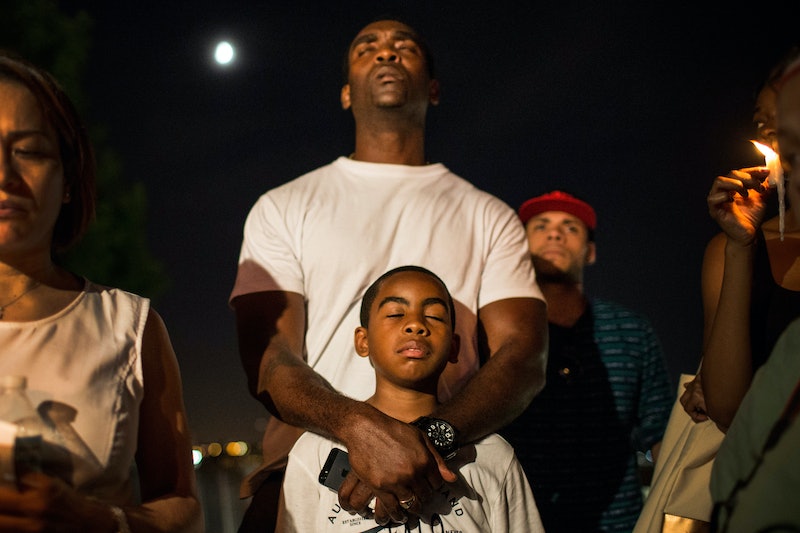 Though the furor surrounding George Zimmerman's acquittal Saturday largely comes back to race, the three-week trial all but ignored the subject.

Jurors, state attorneys, and defense attorneys stated over and over again that "this case has never been about race," with juror B-37 telling Anderson Cooper that Martin's skin color was not brought up once during deliberations.

The prosecution's "biggest mistake," Trayvon Martin's new family attorney tells ThinkProgress, was to ignore race. The judge ruled that the term "racial profiling" could not be used at trial, and perhaps for this reason, the State made little reference to it, depicting Zimmerman as an bully and wannabe police officer who followed and attacked Martin for little to no reason instead. This refusal to address issues of race, the Martin family lawyer said, made "everyone feel comfortable, and when everyone feels comfortable bad things happen."

Martin's mother, Sybrina Fulton, told CBS This Morning that race was at the very heart of the case, and to ignore it led to a flawed verdict. (You can watch the interview here.) "Trayvon was not a burglar," Fulton told CBS. "He was not doing anything wrong. He simply went to the store and was headed back home. And for somebody to look at him, and perceive that he was a burglar... That was the problem that initiated everything."

Fulton said that the family is exploring other legal options; including a challenge to the "Stand Your Ground" law, and possibly demanding the federal justice court investigate whether Martin's civil rights were violated — in other words, exploring how much the death had to do with race.

Critics have claimed that the verdict would have been different if Martin had lived and Zimmerman had died, or if Zimmmerman had been black and Martin, white. "It's the belief that race reveals something significant about a person's character and credibility," writes columnist Jarvis DeBerry. "It's the belief that black is more suspect than white."

Certainly, it's credible that George Zimmerman was permanently released by Sanford officials after just five hours of questioning because police bought his story that he was attacked by a black teenager — the decision that spurred the initial media frenzy.

Others maintain that the case was truly about guns. "The question we should be asking is: What if George Zimmerman didn’t have a gun?" asked the Chicago Sun-Times.

One thing is sure: whether the case was about guns, race, or something entirely different, everybody has an opinion. Or do they? We've written about the furious Tweets that surfaced in the tumultuous hours after the verdict was released, but the Pew Research Center found Thursday that the twitter-sphere is rather tempered: Tweets that stated an opinion were equal in number to Tweets that simply shared the news. Still, those who agreed with the jurors were outnumbered by those who expressed dissent by more than four times.