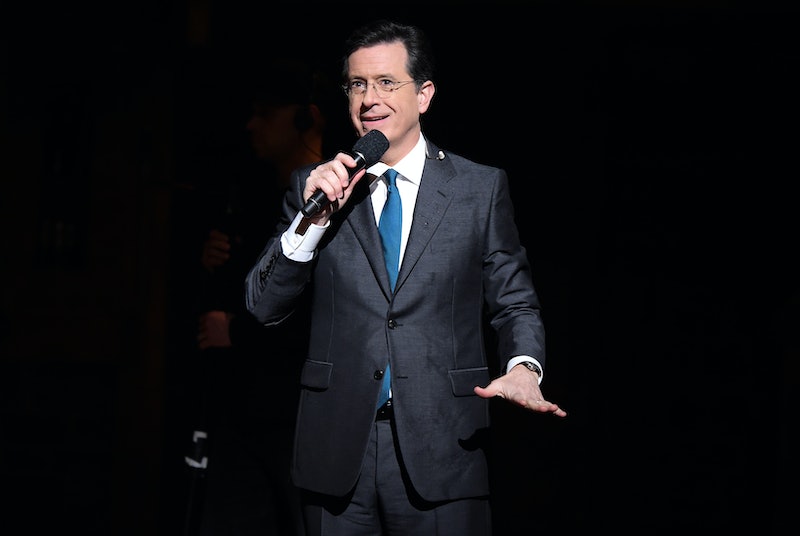 Since Election Day first kicked off this morning, I was looking forward to watching Stephen Colbert’s Live Election Night Democracy’s Series Finale: Who’s Going to Clean Up This Sh*t?, the late night host's Showtime special. I thought it would bring some levity to an important night and add humor to political celebration. But with the votes still being counted and Donald Trump taking the lead in an extremely close race, the overall tone of election night is one of anxiety and concern, and that certainly carried over to Colbert's live election night special. Though that somber atmosphere was felt throughout the special, it was especially apparent in Colbert's closing speech about politics.

Intermittently throughout the night, Colbert seemed to be trying to lighten the tone of his show and look for some bright spots in a concerning time. At one point, shortly after one guest teared up while discussing Trump potentially becoming president and others expressed anger at those who voted for him, Colbert reminded them that everyone has the right to vote, and you need to respect that, even if you don't agree with their choices. But as the show came to a close, Colbert himself became more emotional and gave a moving speech about how to cope with this election's potential ending. He started the speech by saying that there's fear on both ends of the political spectrum:

"Now, I think we can agree that this has been an absolutely exhausting, bruising election for everyone and it has come to an ending that I did not imagine. We now all feel the way that Rudy Giuliani looks. Seeing this election, everyone's going to be saying has America lost its mind? And the answer is evidently 'back off buddy, we got 300 million guns and we're kind of stressed right now.'

By every metric, we are more divided than ever as a nation.... More than four in 10 voters say the other party's policies are so misguided they post a threat to the nation, but you know what? Everybody feels that way. And not only that, more than half of Democrats say the Republican party makes them afraid, while 49 percent of Republicans say the same about the Democratic party. So both sides are terrified of the other side, and I think that's why the voting booth has a curtain so you have some place to hide after the election is over."

Though his words reflected his signature straight-faced humor, there was also a lot of truth to them. He then continued:

"So how did our politics get so poisonous? I think it's because we overdosed, especially this year. We drank too much of the poison. You take a little bit of it so you can hate the other side and it tastes kind of good and you like how it feels and there's a gentle high to the condemnation. And you know you're right, right? You know you're right."

Colbert then brought the discussion about the 2016 election back years, to his own childhood, to explain how he thinks things have changed.

"When I was a kid, we didn't think about politics this much. A lot, but not this much. I grew up in Watergate. My first president was Nixon. I'd come home from school, couldn't watch The Beverly Hillbillies because there was Senator Sam Ervin with the big eyebrows talking about crimes committed in the White House. That was a great, dividing moment in American politics. That's the 'err' moment where we all stopped trusting each other, because Vietnam was wrapped up in that too. People were dying for political expediency... a cause they believed in. But as a kid, even with all that, we didn't talk about politics this much. We stuck with safe subjects.

Back then, you'd talk about religion at the dinner table or trying to guess which family member was gay, back when it mattered. Politics used to be something we thought about every four years, maybe every two years if you didn't have a lot of social life. You cared about the midterm elections. And that's good that we didn't think about it that much because it left room in our lives for other things and other people. I'm from a big family. Jimmy, Eddie, Mary, Billy, Margot, Jay, Peter, Paul, and Steven."

After going through his siblings, Colbert turned to his mother, who passed away in 2013.

"My mother was born two days before women could vote the first time in a presidential election. Again, we don't know what's going to happen, but I was thinking this was going to be the time that she got what she wanted. She told me at age 92, shortly before she died, 'oh I think I would vote for Hillary, this time, it's time.' She only voted for one Democrat in her entire life and that was Kennedy because spoiler alert: we're Catholic."

Before things could get even more somber, Colbert switched gears, talking about the consequences of politics being such a constant presence in national discourse.

"Politics is a lot of horse race, and horse race is gambling, and gambling is, according to the Bible, a sin. Because it itself is a poison. Worrying about winning and not what the consequences of winning is. And I think the people who designed our democracy didn't want us in it all the time. Informed, yes. Politicking all the time, I don't think so. Not divided that way. They designed an election that was meant to confuse us and bore us a little bit. That's why the electoral college exists. And CPSAN. And why the State of the Union begins with 20 minutes of shaking hands with grandpas.

But now politics is everywhere and that takes up precious brain space we could be using to remember all the things we actually have in common, so whether your side won or lost, we don't have to do this sh*t for a while."

We still don't know which side won and which side lost, but just before ending his show, Colbert urged viewers not to give up on America. Instead, he thinks we should come together and use laughter to combat our fears:

"So keep your American flag up, but you can take off your American flag hat. You can put away your 'I Voted' stickers, and you can get back to your life. And I'd like to try to end this election season right now by voting unanimously on a few things that all bring us together. Fair warning: some of these are silly. But in the face of something that might strike you as horrible, I think laughter is the best medicine. You cannot laugh and be afraid at the same time, and the devil cannot stand mockery."

From there, Colbert gave some examples of lighthearted, non-political issues that he wants Americans to agree on, but I think it's that last sentence that we should all remember from his extremely resonant speech. "You cannot laugh and be afraid at the same time, and the devil cannot stand mockery." No matter what happens next, hopefully, we can soon come together to laugh and find a way to bring positive change to our nation.