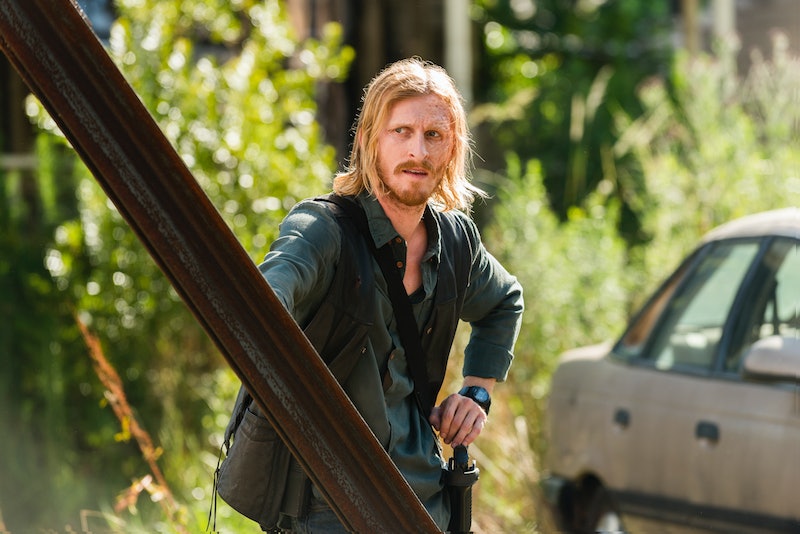 Though the Nov. 6 episode focused on Daryl’s capture, it gave a glimpse into another major Walking Dead character, Dwight. Viewers first met him in Season 6 when he was on the run with his wife, Sherry, and her sister, Tina, and we now know what happened when he went back to the Saviors. However, after careful observation and some hints from the comic books, I'm starting to think that Dwight could become a good guy soon. He may seem not so great right now, but I think we all need to give Dwight the benefit of the doubt, especially when you consider what happens in the comics that The Walking Dead is based on.

After Negan makes disgusting comments about Sherry, Dwight leaves their compound and tells Rick and Ezekiel that he will basically be a spy in the Saviors for them. While they're unsure whether or not to trust him, Dwight eventually proves himself during one of the battles by killing some of the Saviors and giving Rick’s side their grenades. He keeps up his spying until Negan’s eventual downfall and then proceeds to take over and lead the Saviors.

Of course, if we’ve learned anything by now, it’s that the AMC series doesn't always stick to the comics, but that doesn't mean Dwight won't have a similar change of heart. In fact, there are already signs that we'll see him switch sides on The Walking Dead this season.

He Already Ran Away

Dwight didn't have much of a choice but to go back to the Saviors, but that doesn't mean his desire to escape just went away. His only way out of Negan’s grasp might be to join Rick when the war starts and he'd likely capitalize on any opportunity to leave the Saviors.

Negan Is Trying To Get Sherry Pregnant

In order to save Dwight's life, Sherry offered to marry Negan, and the Nov. 6 episode showed that in addition to Negan taking her up on that offer, he's currently trying to get her pregnant. If Sherry and Dwight ever want to be together again, they have to leavethe Saviors for real, and I wouldn't be surprised if their next attempt comes soon because of that.

When Dwight went out on a mission to bring back a Savior who had run away, his former friend pleaded to be killed instead of brought back. Though Dwight taunted him at first, he eventually listened and killed the man instead, proving that Negan doesn’t have total control over him.

That Moment In The Hall With Sherry

Clearly, both Dwight and Sherry are upset that she is forced to be with Negan now. Their stolen conversation showed as much, and gives another incentive to turn against Negan.

He Doesn't Want To Hurt Daryl

Throughout "The Cell," Dwight was actually trying to get Daryl to do what Negan wants, so Dwight wouldn't have to kill him. And although it was a small moment, it seemed that Dwight and Daryl understood each other at the end, when Daryl explained that he understands the choices Dwight made, but can't do the same.

It's obvious that Dwight lives in fear of Negan on a daily basis. At some point, that fear is going to become anger, and then that anger will become rebellion.

Though he's working for Negan right now, Dwight could become a key ally for Daryl and the rest of Rick's group as The Walking Dead Season 7 continues.