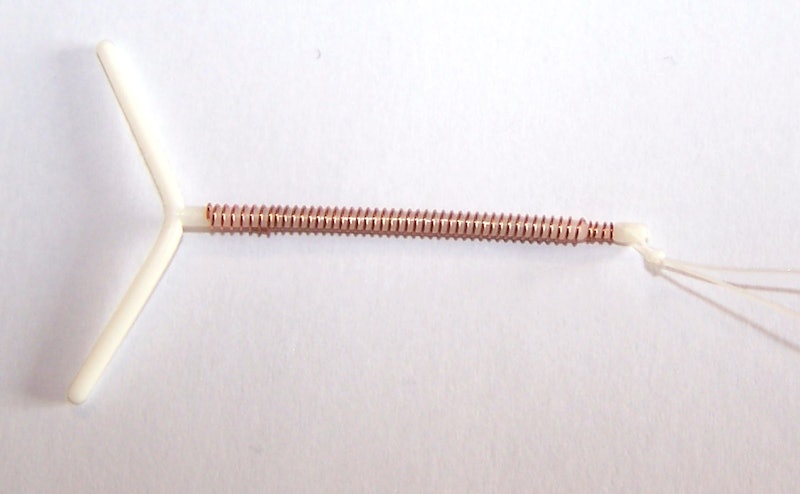 In the wake of Donald Trump's shocking, deeply disturbing win on election night, many women are taking to Twitter to urge others to get an IUD before Trump takes office in January. Why the sudden push for intrauterine devices? A Trump presidency could mean major changes to women's access to birth control and reproductive services. Some are suggesting that women who don't want to have kids in the next few years go ahead and get their IUDs while they can. The devices last a number of years, which means they could outlast Trump's term as president.

Right now, the Affordable Care Act (aka Obamacare) guarantees women free access to birth control of a variety of types, including hormonal methods (pills, patches, rings, etc.), emergency contraception, and IUDs. Trump has repeatedly vowed to repeal the ACA as one of his first acts in office, so it's very possible that women will not have free access to birth control for much longer. That's a major problem for women who would struggle to pay for monthly prescriptions without the requirements of the ACA, as well as those who want to control their reproductive lives via IUDs, which are highly effective and long lasting, but can be prohibitively expensive. (According to Planned Parenthood, IUDs can cost as much as $1,000.)

Trump hasn't said anything to suggest that he's anti-IUD (as Erica Gloria Ryan at The Daily Beast has suggested, it's entirely possible that he doesn't even know what they are), but his running mate Mike Pence has a long, colorful history of disrupting women's access to health services and birth control in his home state of Indiana.

Having affordable access to reliable birth control is especially important, as Trump has vowed to fill Justice Antonin Scalia's empty Supreme Court seat with an anti-abortion judge, and he will likely have the opportunity to appoint more justices in the next four years (and Mike Pence has been behind some of the most draconian anti-abortion bills out there). Roe v. Wade is in real jeopardy of being overturned. Women's access to reproductive healthcare has always been an embattled subject, but it's vulnerable now in a way that it hasn't been for a long time.

IUDs aren't for everyone, but it's worth taking a look at them if you're in the market for long-term birth control that doesn't require you to remember to take a pill or change a patch — or if you're concerned about being able to afford a monthly birth control prescription if Obamacare is repealed. There are hormonal and non-hormonal options (Paragard, the non-hormonal type, can be a great choice for women whose bodies don't play well with hormonal medications), and both are nearly 100 percent effective at preventing pregnancy. Depending on the type you get, an IUD can last for three, five, or even ten years — long enough, hopefully, to see you through the next presidency.