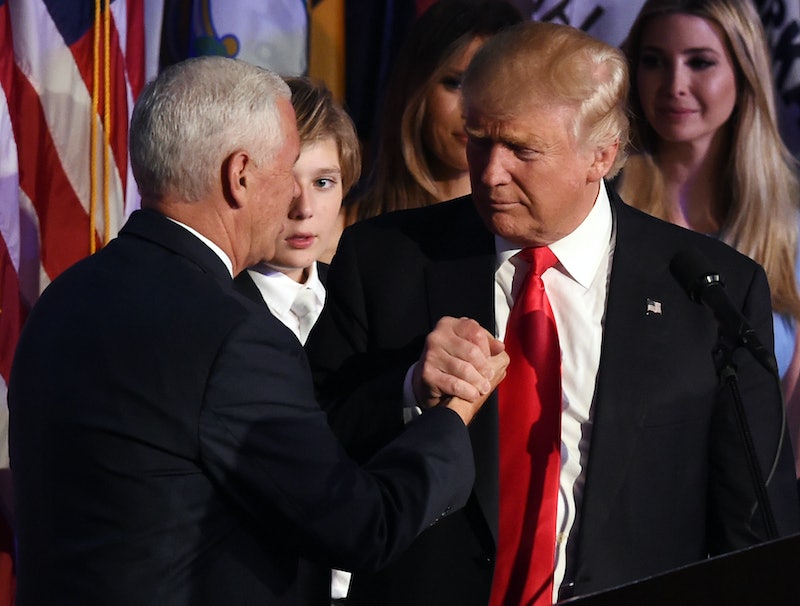 This presidential election came with many emotions and opinions. After a long ride, Donald Trump is now the president-elect. If this news makes your blood boil, then you're in luck. There are petitions you can sign to protest Trump being your president. Although the signatures might not be the most effective route to change, they do make a major statement about how you're feeling about the future of this country.

After winning enough electoral votes to be named president-elect, Trump took the stage to talk about standing as a united nation, but, coming from him, that message didn't resonate well with many Americans. People took to Twitter to share their sadness, fear, and anxiety about the years to come. They also decided to be active and create anti-Trump petitions. The idea is nothing new. There have been petitions created to protest his candidacy since he first announced that he would be running for office, including "Dump the TRUMP Name" and even one calling for Trump's arrest, which was shut down by the White House, according to NBC News.

Just hours after Trump's victory speech, people have already drawn up petitions to protest him getting into office. Even though 26 state officials have been recalled, according to National Conference of State Legislature, it's impossible for a president to be booted by petition. That hasn't stopped people form trying though. Here's a list of all the petitions out there that you can sign if you're unhappy with the way the 2016 election has played out.

Created right after the election, this petition calls to impeach him before he even gets to office. It's racking up the signatures already.

2. Get Him Out Before He Even Starts

This is another call to impeach Trump. It also holds a lot of names already.

While this petition might not have picked up speed yet, something tells me it will soon.

Believe it or not, there's over 70,000 signatures on this petition to send Trump to space and leave him there. Perhaps not the most practical solution, but it might make you feel a little better!

Officially this one is all about standing with Hillary Clinton and against Trump, but people are still signing it after the election.

There's also one drawn up to beg Trump to release his tax returns.

Although this one lags behind the other two, people are still signing.

These petitions sure do make a statement!