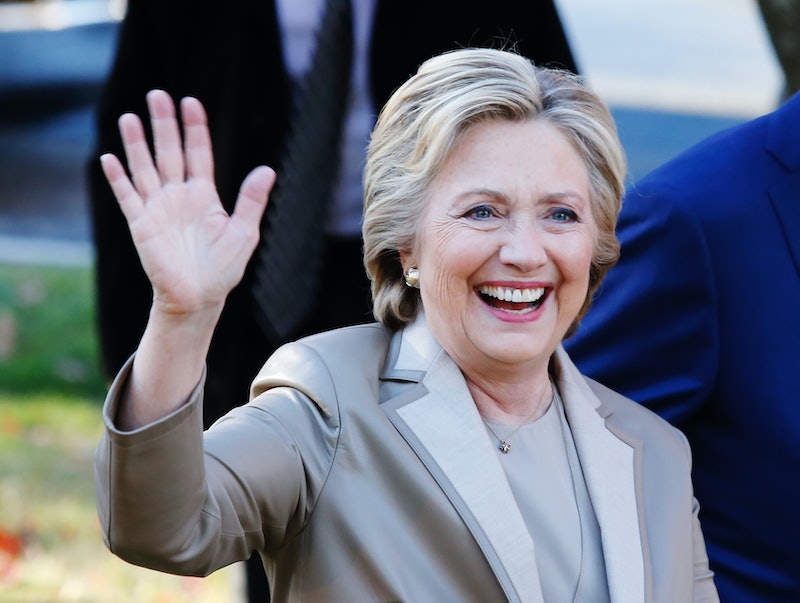 The 2016 election has officially come to quite the shocking end and it certainly will take time to let the results sink in. Early Wednesday, Nov. 9 it was announced that Republican nominee Donald Trump is the president-elect and Democrat Hillary Clinton's road to becoming the first woman president of the United States surprisingly ended. Even though she lost the election that doesn't mean there aren't other worthy women who came out on top in this election, and who will continue to do so and lead in the years to come. So, who can be our next champion after Hillary Clinton?

Of course, Clinton's loss doesn't mean you have to stop supporting her or forget about her presidential campaign. As she said in her concession speech Wednesday afternoon,

"And to all the women and especially the young women who put their faith in this campaign and in me, I want you to know that nothing has made me prouder than to be your champion. Now, I know, I know we have still not shattered that highest and hardest glass ceiling but someday someone will and hopefully sooner than we might think right now. And to all the little girls who are watching this, never doubt that you are valuable and powerful and deserving of every chance and opportunity in the world to pursue and achieve your own dreams."

To finally shatter that glass ceiling we have to continue to elect women into office and champion them to make this country a greater place. That's what Clinton wants and it surely makes her feel better to know how many Americans want the very same.

As hard as it may be to move past Clinton's loss, it's important that you know which women scored big wins in the 2016 election. This doesn't mean you can't still be "with her," but it may ease her defeat in knowing that there are female politicians out there following in Clinton's footsteps.

Democrat Kamala Harris was elected California's new U.S. senator. This win is particularly meaningful as Harris is the first black woman to be elected to represent California in the Senate and is the first black female U.S. Senator since 1999. Now that is something to celebrate. She took to Twitter after her win to express her excitement, and she empowered her followers in the process. Harris tweeted in Clinton-like fashion,

I am so proud to represent this beautiful and diverse state. We know that we have a task in front of us. We must do everything in our power to heal and bring this country together. I intend to fight. I intend to fight against those naysayers who say there is no such thing as climate change. I intend to fight for commonsense gun safety because it’s just the right thing to do. I intend to fight to make sure all of our communities are stronger. Our ideals are at stake right. We have to fight for who we are. We are collectively being called on to look in the mirror with furrowed brow and ask: who are we? I believe the answer is a good one. We are a great country and part of what makes us a great country is that we fight for our ideals. This is a moment that challenges us and I know we will rise to the occasion. We must not despair. We must not be overwhelmed or throw up our hands. It is time to roll up our sleeves and fight for who we are!

On Tuesday, Democrat Catheirne Coretz Masto won the Senate race in Nevada and became the first Latina senator. She will fill Senator Harry Reid's seat, the Democratic minority leader who retired after three decades serving in the Senate. Per The New York Times, Masto is Nevada's former attorney general and as the granddaughter of a Mexican immigrant, she rallied against Trump's border wall plan and backed Clinton.

She is also about embracing diversity and giving women more opportunities. During a visit to a Nevada high school in September, she said about potentially becoming the first Latin woman in the U.S. Senate (via Fusion), "It should have happened a long time ago. We need more women. We need more diversity." She continued, "We need more women who are mentoring other women, particularly women of color, to say here’s how it can be done."

Democrat Tammy Duckworth became the second female senator in Illinois history, New York Daily News reported Tuesday. The Iraq War veteran, who lost her legs and partial use of her arm after a helicopter accident in Iraq, now fills the seat once held by President Barack Obama.

During her victory speech, Duckworth declared, "Just as I try every day to live up to the sacrifice my buddies made to carry me off that battlefield, I will go to work in the Senate looking to honor the sacrifice and quiet dignity of all those Illinoisans who are facing challenges of their own." Per the Daily News, she later discussed in her speech how she would help working class families, make college more affordable, create more jobs, and provide resources needed to veterans.

Democrat Patty Murray won her fifth term as Washington's state senator. Per Seattle PI, ever since 1992, Murray has been known as "a mom in tennis shoes." So far, she has served 24 years in politics and isn't stopping anytime soon. After she won again for the fifth time as her state's senator, Murray said in her victory speech (via MyNorthwest.com), "Here in Washington state, voters voted for progress and I love you for that." Two of her biggest goals are focusing on higher education and fixing high tuition costs, in addition to student loans.

In May, Murray, alongside others, introduced the Survivors’ Access to Supportive Care Act (SASCA), "legislation to provide guidance and support to states and to hospitals providing sexual assault examination services and treatment to survivors." She once said (via the U.S. Senate Committee on Health, Education, Labor, and Pensions' website), "When survivors of sexual assault seek medical care they should be offered the best information, services, and support available."

With women like this, they should make us all realize how we are stronger together and that there are no shortage of female champions.