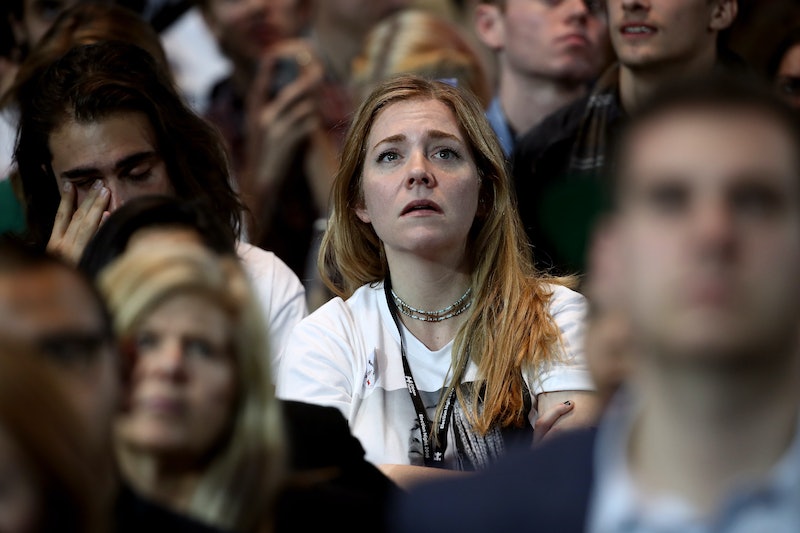 On Election Night, as I sat in slack-jawed amazement and denial watching the map turn more and more red, I started to feel something new, something I’ve never felt before. Fear. Real, visceral fear. As an almost 40-year-old, straight, cisgender middle-class white woman, that’s not something I’m used to feeling. The color of my skin has afforded me protection from experiencing much fear over the course of my life. That is my white privilege.

Sure, as a woman, I’ve had the metaphorical deck stacked against me in a lot of ways — I’m not negating the plight or minimizing the struggles white women face as compared to white men. Women have always had to fight for respect, for equality, for safety, for acceptance. As a white person, though, I’ve never had to fear for my husband’s life if he was pulled over or didn't behave in a certain way in front of the police, or worry that my children will suffer because of the color of their skin. I’ve always had that protective bubble of whiteness around me — and that bubble has allowed me access to the privilege club, regardless of my lack of a Y chromosome. I’ve always been kind-of-protected, at least compared to LGBTQ people or people of color.

Our white privilege has us convinced that whatever happens next will not happen to us. We think our privilege will protect us. It will not. This couldn't have happened without white women — and whatever comes next is also on us.

My privilege bubble allowed me to sail through this election, blinders firmly in place. I was confident in the rightness of my position. I never once doubted my conviction that we would not elect a hate-monger. Never in my wildest imaginings did I envision this end. My privilege bubble popped as I watched that map turn red. My blinders were removed — and worst of all, I saw my white sisters damning us all.

Because this is the fact: according to CNN, 53 percent of white women stood up on Election Day and said “Yes! Us too! We are not with her, We are with HIM” — 53 percent. By comparison, Trump only got four percent of the African-American female vote, and 26 percent of the Latina vote. How could white women have let this happen? How did so many of us stand up and vote for someone who represents sexual assault and misogyny? How can so many of us not only ignore his comments, but endorse them? Women in Trump's camp routinely excuse his sexist comments as him being "authentic," "honest," and "real" — and it makes me sick for us.

That's how deeply entrenched it is — the conditioning to not only ignore, but approve of, sexism and misogyny as women. When bragging about sexual assault is seen as presidential, that's when we've hit bottom. The pathology of internalized sexism, of generations of conditioning and making excuses — that is what allowed this to happen. We have been conditioned to ignore sexism, to blame the victim, to tug our pearls and look the other way. Women of color, 96 percent of them, got it right. They tried to save us from ourselves. They've seen this before; they recognized the evil in his words, sexism, and racism, and stood up en masse to prevent this. Where were white women?

Our white privilege has us convinced that whatever happens next will not happen to us. We think our privilege will protect us. It will not. This couldn't have happened without white women — and whatever comes next is also on us.

With their vote, tens of millions of people, my neighbors and relatives, my kids teachers and coaches, have emphatically stated that not only do they not care about LBGTQ people and people of color, they also don't care about women. They don’t care if I’m treated unfairly because of my gender. They don’t care if I’m sexually assaulted or victimized. They stood up, loud and proud, and said f*ck you to every woman they know. And the worst part is, many of them were women themselves.

Well, white women, it’s time for us to stop kidding ourselves with excuses and take responsibility for our white privilege, whether we voted for Trump or not. It's also time to wake up and realize that our bodies are our own — and that we deserve to defend them. It's time to use our voices to shout down those men who would keep us silent. Talk to people in your communities, teach your daughters to stand up and be heard; your sons to know when to sit down and listen. Own your privilege — and use it to make the world a fairer place. Call out racism, sexism, and misogyny wherever you see it. Run for office, vote, volunteer your time. Fight against any law Trump passes that seeks to hurt women — as well as people who look different from you. And please, in 2018, don't let bigotry win again.

We helped cause this mess, white women. Now we need to help fix it.