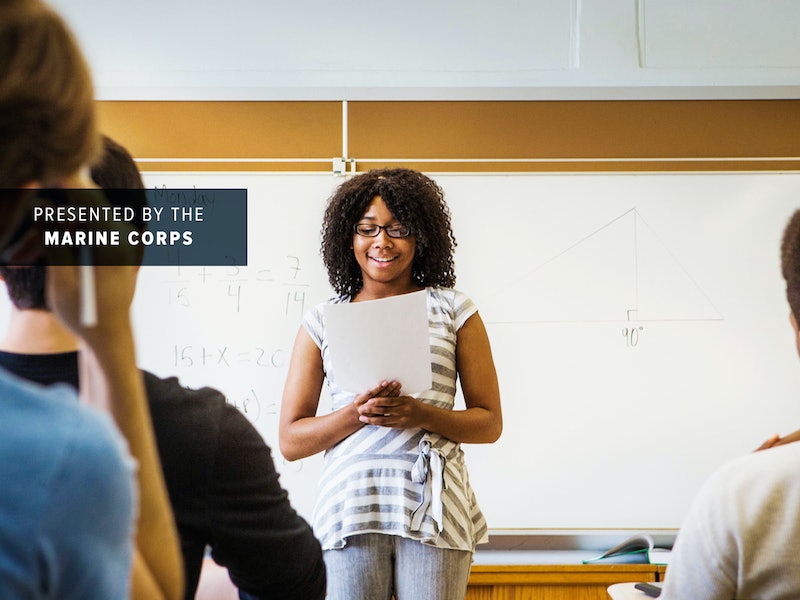 High school is tough. I went through so many phases that I’m certain there were days my mother dropped off one blond, bright-eyed teenager at school only to return to find a completely different angsty, brooding you-know-what in her place. Yet the experience as a whole helped me grow into the strong woman I am today. There are certain obstacles I had to overcome that were pivotal in terms of determining my true interests, passions, and the activities I wanted to pursue.

For example, I was cut from the soccer team's roster in seventh grade, which challenged me to try a new sport: field hockey. While at first I was apprehensive (I had no other friends on the team and had never played before in my life), I ended up loving the game and excelling on the 11-woman field, becoming one of Northern New Jersey’s top varsity players. I even went on to play at the club level in college, where some of my teammates evolved into my best friends, whom I still hold dear today.

Sometimes, we must overcome challenges first before learning where we excel. To inspire young women who may be experiencing difficulty during those difficult high school years, we partnered with the United State Marine Corps to ask women to share their experiences that helped them find their inner strength.

“During my junior year of high school, I decided to run for class president. I spent a great deal of energy creating policy stances and voicing my opinions to my fellow students via campaign literature and word of mouth. My speech was well thought out and mimicked the speeches that we hear candidates use during local or state elections (I took my campaign seriously!). When it came time to vote, I lost to a popular girl whose focus was merely junior prom.

I was devastated, but instead of moping or feeling sorry for myself, I channeled my energy into running for a national leadership position with my debate and mock congress club. Well, I won! And I was able to represent the New England region of the Junior State of America Foundation. I learned two valuable lessons that school year: 1) Know your audience! This is something that I have carried into my professional life; and 2) Just because you do not necessarily meet your goal does not mean that you have failed. I was suited to lead a large group of peers, I just had to find like-minded people.”

"I Learned How To Go After What I Wanted" —Vernice, 42

"I didn’t have enough money to afford college, never mind fly around the world, but I really wanted to go to New Orleans for Mardi Gras. I joined the ROTC program at school, knowing the team would be going there later in the year. I joined and had an amazing time, created amazing friendships, and eventually went to Mardi Gras. I didn't do any partying. Instead, we marched [in the parades] every day. That experience taught me you need to prepare for your action. Even if you aren't where you want to be, you need to think about what you could be doing to get you there. Even today, that plays into my current messaging, which is making your gutsy move. It takes courage to go for it, but it’s the gutsy move that allows you to live life without regret."

"I had the ultimate high school fantasy come true: the guy who I liked for years asked me out, (which I couldn't believe had actually happened!). We went on a few dates, but he dumped me via the classic fade-out. I didn't confront him about in the moment, but a couple months later, we were at a party and he tried to make up. With my sense of injustice enflamed, I didn't let him have the satisfaction. I told him off in front of a few people, not even realizing that I was capable of standing up for myself to that degree. Sure, it was done in a VERY public way. But just seeing how i reacted was a huge moment of transformation, where I developed the confidence to take no crap from the people who were irresponsible with my feelings."

"I Pretended To Be Someone I Wasn't To Make Friends" —Erin, 26

"High school was hard for me because I never had a specific group of friends the same way everyone else did (or so it seemed) ... In my junior year, I tried to befriend one of the "cool" girls, in the hopes of her liking me and inviting me into the popular group. I have never tried so hard to be anything but myself. I pretended to like what she liked, claimed I listened to the music she listened to, enjoyed the film noir's she was strangely invested in, and acted like I was just as rebellious as she was.

I was none of these things, and I learned that it was exhausting to actively not be me. Even after I tried so hard to gain her acceptance, she ended up being a terrible friend. Despite how much I tried to make her like me, we only ever hung out alone; she would seem embarrassed by me in school, and even after all my attempts, I never did hang out with her "cool" group.

The whole experience taught me to value the friends I did genuinely have. I may not have fit in with my friends' groups, but it was more reassuring to know that I did have friends — ones who liked and loved me for who I was and whom I could be myself around."

"I Struggled With My Sexuality" —Alicia, 28

"Throughout middle school, I (like everyone else) struggled with who I was -- but mainly with my sexuality. I could not believe that I was somehow this thing that was considered bad or different by society, and made every attempt I could at trying to appear more "normal." I started lying about everything -- where I was, who I was hanging out with, what I was doing, and what kind of music I liked. I feared I would lose the support of my family and friends if I told them I was gay, so I hyper-"normalized" myself to cushion the blow.

When I was 16, I told a friend I felt I could trust, and it was her unwavering support and acceptance that gave me the courage to tell my parents. Having one person in my corner suddenly became enough. Soon after, I told everyone I knew and ended up with a whole army in my corner. Prior to coming out, I always felt there was something about me that was somehow "different," and that made me uncomfortable in my own skin. Once I declared this immensely important part of who I was, I settled into myself. I felt more confident, and I truly did not care what other people thought of me. Even when other students made mean comments, it didn't matter anymore because I was no longer living a lie. I think I've carried that lesson with me throughout my adult life -- as long as I am honest and surround myself with positive people, it doesn't matter how I am perceived by others."

"I struggled with test anxiety my junior year. I knew college applications were coming up, and my hardest subject was chemistry. I would work tirelessly, seeking extra help from my dad, a chemistry scholar in college, as well as my teacher during his office hours and after school. I felt confident with the material, but when it came to the tests, I started to second guess myself.

When the finals came around, I got a low C, which was also bad news for my overall class grade. I began crying to my teacher after class, sharing my frustrations and fears that I would never get into college with my grades, and my grades sucked because I stressed out during tests. To which he responded, "Well, college isn't for everyone."

Of course, he's right — college isn't for everyone. But I knew it was for me. I wanted to go to college, and I knew that more interesting knowledge and courses awaited me. He knew very little about me, and here he was, assessing that I probably wasn't college material. It ignited a fury in me and I think throughout my whole life, it's been those words that have made me want to prove him and everyone else who's ever doubted my talent and ability. Today, three higher education degrees later (two bachelor's and one master's), I know that no one can tell me what I'm capable of, except me."

"I Realized I Wasn't Living Up To My Potential" -Stephanie, 30

"I had a major life crisis when I was a sophomore in high school, and it was the best thing that ever happened to me. After first semester sophomore year, I looked at my life and saw I wasn't close to living up to my potential: My grades were lackluster, I was bad at the violin, and I wasn't improving at tennis — and those were the only three things I had going.

"After that particularly disappointing semester, I had a crisis ... I thought I was destined to for a life of mediocrity, well into adulthood. Then, after a week in bed freaking out about my future, I suddenly had a sense of clarity: I would simply start trying hard, and believing I could do things. That doesn't sound very dramatic, but that simple realization put me on a different path for the rest of life, and it was surprising how things that had once been so hard became so easy. I went from the middle of the pack to the very top of the class at a really competitive school, passages that had tripped me up on the violin suddenly sounded beautiful, and I started winning matches in tennis. Even my posture changed completely. It was an unforgettable lesson that a change in attitude and a commitment to paying attention and trying hard made the impossible possible."

This post is presented by the United States Marine Corps.