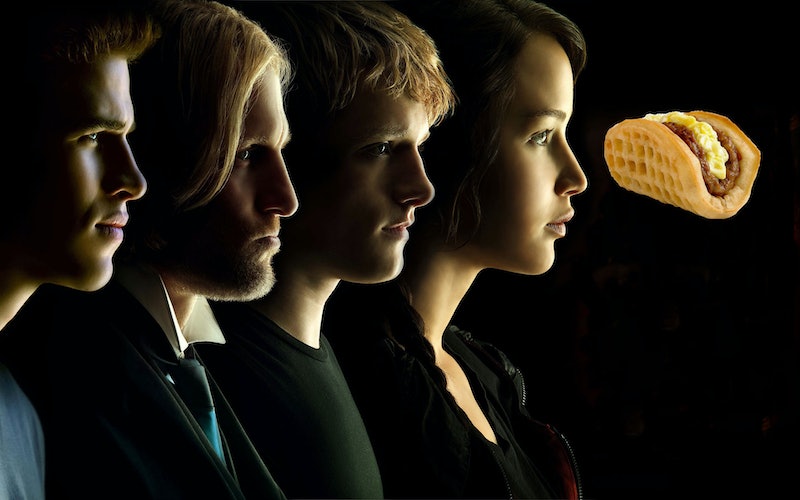 Unless you've been living under a rock this week, you know that Taco Bell introduced its new breakfast menu, with the Waffle Taco as its pièce de résistance. Whether this news makes you want to barf or cry tears of joy, there's no denying that Taco Bell has ignited a bit of a fast food breakfast war when it launched a commercial featuring "real-life Ronald McDonalds" to tout the introduction.

McDonald's fired back — in admittedly a less-creative way — by announcing that it will give out free coffee during breakfast hours for the next two weeks, from March 31 until April 13. Will this turn into a Hunger Games-esqe fight to the death?

No, probably not. Fast food is still unhealthy, no matter how you slice it, and eating it doesn't put the odds in your favor by a long shot. It's still going to be loaded with high fats and high calories. But as fast food mainstays like McDonald's and Burger King have faced more competitors crowding into their morning routines, breakfast makers have tried to attract new customers (ahem, Millennials) by making menus more diverse — and wackier. Dunkin' Donuts' glazed doughnut breakfast sandwich, anyone?

Let's compare the new kid on the breakfast block to other major fast food chains, so you can make your own educated decision...

Sample Menu Items: Two types of Waffle Tacos (bacon and sausage), the A.M. Crunchwrap (eggs, hash browns, cheese, and steak wrapped in a flour tortilla), and the Breakfast Burrito (with a "double portion of fluffy scrambled eggs,"). Cap it off with Cinnabon Delights, literal balls of fried dough.

Taste: Taco Bell sent The Daily Dot's Cooper Fleishman on a super-secret breakfast mission worthy of James Bond's approval. Well, not really, but that's not important — point is, he still got his Waffle Taco and lived to tell the tale.

The verdict? Surprisingly good! I practically inhaled the waffle taco. It tasted like a sausage-egg-and-cheese sandwich you’d get from a bodega, but the waffle shell gave it a nicer texture. The cheese and egg and meat were well-proportioned. I didn’t add any syrup. Honestly, it doesn’t need it—it happens to be sweet enough already. My standards for early-morning face-stuffing are low, but I’d probably get it again.

Also, an hour after eating one, I feel fine. I was legitimately worried I wouldn’t.

However, Vice vehemently disagrees with his assessment, simply stating: "My Waffle Taco resembled vomit, though it tasted a bit better. It was like adding sugar to a pile of shit."

Calories: But hey, guess what? The oatmeal and Egg McMuffin have the exact same amount of calories (290), although the latter has a ton more grams of fat (12g versus 4g).

Taste: The Egg McMuffin has been kicking around since the early 1970s, so they've got to be doing something right, I suppose. People are still not completely sold on the oatmeal, though. In a taste test, Slate staffers remarked that "the sweetness (unoptional, pre-mixed-in) was rather alarming; judges described it as 'cloying,' 'gross,' 'artificial,' mysteriously 'banana-y,' and tasting of 'melted plastic.'" Yikes.

So, pretty boring. I have to admit, I'm a tad disappointed at the lack of cinnamon-flavored dessert on this menu. Tsk-tsk.

Calories: A CROISSAN'WICH (ALL CAPS ALL THE TIME) has about 640 calories in it, while the burrito has about 840.

Taste: The Internet seems pretty ambivalent about the whole Burger King breakfast menu. Horrifyingly, BK has introduced some short-lived travesties called the Italian Breakfast Burrito and the Bacon Gouda Muffin Sandwich, but taste-testers were not deterred. This one reviewer was actually quite happy about his breakfast sandwich:

That's no excuse for the terrifying "Wake Up With the King" ad campaign, though.

Sample Menu Items: All Subway's breakfast sandwiches look like they come wrapped between a piece of cardboard, but it's customizable. Menu items include the Bacon, Egg & Cheese, Breakfast B.M.T. Melt, and the Sunrise Subway Melt. Plus, you can add sriracha sauce to any sandwich.

Calories: Subway prominently features three sandwiches that have less than 200 calories, which is a plus.

Taste: The Internet's consensus seems to be "not bad!"

John M. Edwards at Serious Eats tried the Western sandwich, and he was content with the whole process:

As for the quality of the sandwich itself, the flatbread was chewy, a lot like their sandwich breads; the egg omelette was surprisingly soft and moist, and tasted not unlike real egg. The peppers and onions were very crisp, and the white American cheese, while unexciting, was gooey and warm after the toasting. Altogether, the vegetables really popped, and made it taste like a real Western omelette.

Despite the fact that the smell of a Subway makes me want to throw up even if I'm down the block from it, I think we have a clear winner in terms of healthiness and variety: Subway!

If all else fails, you could simply take five minutes out of your morning to pour a bowl of cereal or eat a freaking cup of yogurt. Believe me, your tummy will thank you.