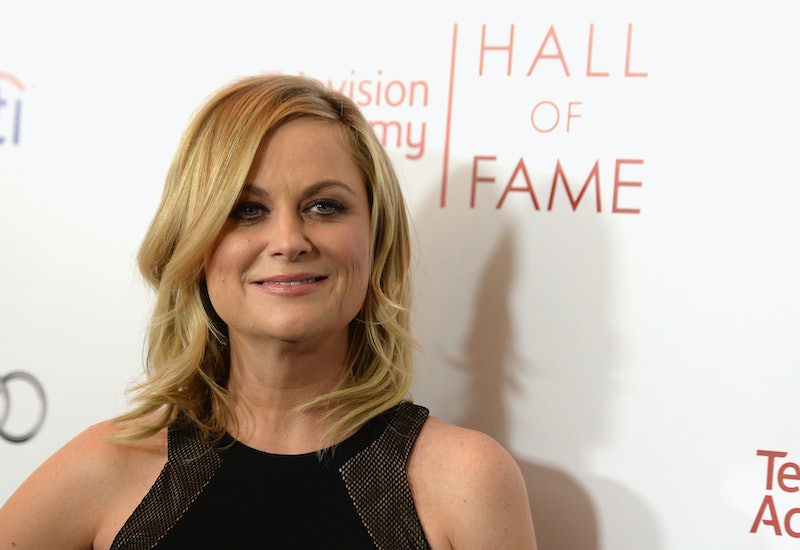 Amy Poehler, comedian extraordinaire, is putting aside her funny side to do something important: Combat rape culture. And she's doing it by appearing in PSAs, adding to a growing list of 50 other celebrities who have taken part in the NO MORE ad campaign, which aims to raise awareness about sexual violence. Along with the addition of Amy Poehler, the campaign has been updated to provide PSAs that specifically speak to the stigma around male rape victims.

The PSAs are simple but powerful: They display the celebrity's face, along with phrases that exemplify rape culture and myths about rape, such as "She was asking for it," "That doesn't happen to guys," and "What kind of guy would let that happen to him?"

Mariska Hargitay, actress in Law And Order: SVU, is to thank for this. When she's not acting, Hartigay advocates about America's national rape kit backlog and manages the rape-survivor advocacy non-profit, the Joyful Heart Foundation, which she also founded. The foundation was responsible for spearheading the NO MORE campaign.

Take a look at the PSAs for yourself below. The following show Poehler, Hartigay, Christopher Meloni (who plays Elliott Stabler in SVU), and rapper Ice-T (who plays Odafin Tutuola in SVU) in order.

That said, the NO MORE campaign doesn't come without controversy. While bringing in the characters of SVU can certainly be powerful, the TV show has also come under fire for allegedly perpetuating other rape myths.

Take a look at other NO MORE campaign ads here.

More like this
How The City Healed Five Years On From The Manchester Arena Attack
By Ella Glover
Harry Styles Called For "Backlash" In Powerful Statement On Abortion Rights
By El Hunt
Sandra Bullock, Girlboss Extraordinaire
By Matt Harkins & Viviana Olen
This 'Anatomy Of A Scandal' Star Has Joined The 'Bridgerton' Family
By Sam Ramsden
Get Even More From Bustle — Sign Up For The Newsletter