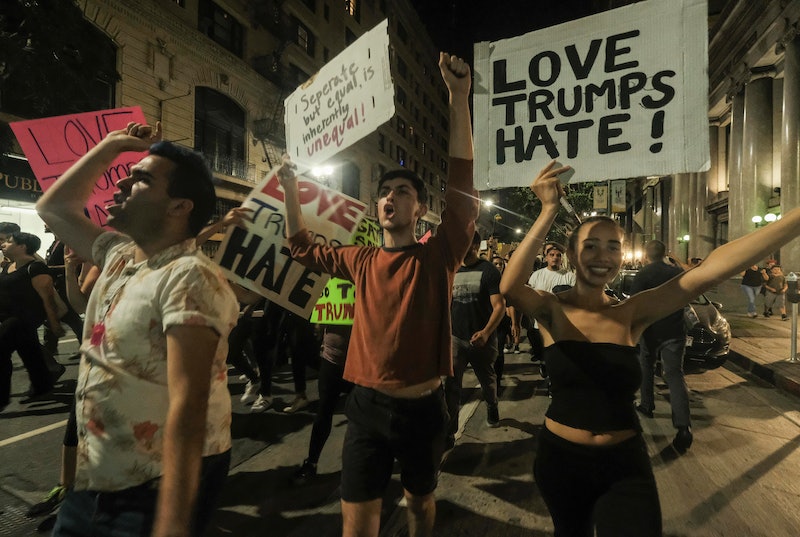 I woke up Wednesday morning in a fog of congestion and clutched at my phone from the bedside table. I did what many Americans that morning probably did — I checked the internet to see if the election results could have been just a nightmare. They were not. Donald J. Trump won the presidency overnight. I was not asleep but awake in a sense of rich despair.

The internet was alight with response — angry liberals, heartbroken members of minority communities, and astounded men and women, desperate for explanations and ways they could talk to their children. I skimmed my feed as my partner breathed deeply in the bed next to me, still asleep and ignorant to the state of our new country.

The two of us sat quiet over breakfast. Neither of us could offer much commentary or solace. Silence felt safer. We relaxed into the Bon Iver sounding through the speakers from the living room. A candle flame danced between our two plates of eggs and toast. I wondered guiltily when we could get back to normal — when this would all pass over. When we finally spoke, my partner confessed that he was angry with those who supported Trump.

“I’m mad that there are so many people who are just OK with all the things that he is.”

I disagreed. “I don’t think it’s black and white. I think there are a lot of good people who voted for him.”

He shook his head and sipped his coffee, and I realized very quickly that he needed more time to mourn, to feel hurt — to be in disbelief. If my Facebook feed was any indication, many other friends and acquaintances needed space and time, too. They are entitled to it. I, however, had already moved on to the next phase. I already needed the next emotion — hope, action, unity, love. Hopefully, all of the above.

I’ve seen many people deem these election results “a tragedy.” Many people my age are sharing the map of the votes from the 18 to 25 age bracket. This is the future, they say. This is where America is headed.

But is it? During one of my many check-ins with social media today, I came across a post from a more conservative millennial friend of mine that read:

I’m reminded of the documentary, How the Grinch Stole Christmas. When the Whos joined hands and sang fahoo fores, the Grinch’s heart grew three sizes — and that was the Grinch for crying out loud. Time to suck it up and give the man a chance.

Give the man a chance. For me, the very thought makes my gums hurt, my skin crinkle. But do I have a choice? I did my duty — I voted for the opponent, and the opponent lost. The country has collectively — the younger generation included — chosen a president who will be sworn into office despite his divisive and controversial campaign. Is there any other choice but to give him a chance?

We’ve got to trust our neighbors, but also our opponents. We’ve got to trust that the folks on the other side of the fence have good intentions — that they just have just as many fears and insecurities to survive.

After the very first debate between Clinton and Trump, I sent out a desperate status: “Big favor. Could any of my friends planning to vote for Trump please message me privately to explain why? I’d truly like to understand.”

Now that the election is over, I recognize that this acquaintance and his vote helped to get Trump elected — that he’s a part of this intimidating and gloomy outcome. But it helps somehow to have heard his voice — to know that while he may have cast his ballot towards Trump, he didn’t necessarily believe in him.

Politics are only personal when we make them personal. Trump’s administration is personal to me as a woman, but only because I fear for my reproductive rights and my own safety against potential predators. I’ve made it personal. I can’t expect every other woman in this nation to share my fears or to have made this race as personal.

More like this
Rachel Might Give This 'Bachelorette' Contestant A Second Chance
By Kadin Burnett
The 12 Best Air Fresheners For Bathroom Smells
By Amber Petty
Britney Spears & Sam Asghari Called Out Kevin Federline’s Claims About Her Kids
By Grace Wehniainen
The 6 Best Bras To Wear With Tank Tops, According To Reviewers
By Scarlett James
Get Even More From Bustle — Sign Up For The Newsletter