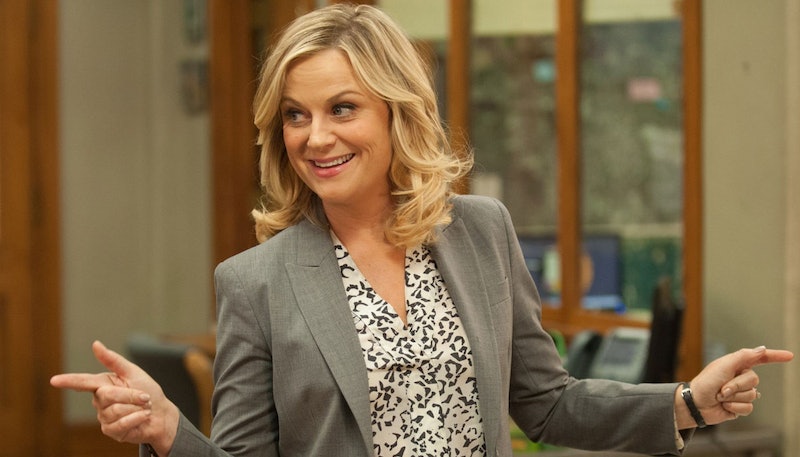 For all the Leslie Knopes of the world, don't give up. That was the message from the letter Leslie Knope wrote to America after Donald Trump's win. Knope, who works for the U.S. Department of the Interior, Midwest Branch, in her hometown of Pawnee, Indiana, shared a story from her youth about choosing a qualified (fake) 4th grade president — a turtle named Greenie — over an unqualified (fake) 4th grade president — a T-Rex named Dr. Farts. Dr. Farts won, and she was sad, but as she writes, her teacher taught her an important lesson that day: “People are unpredictable, and democracy is insane.” This story may feel a bit too real in the days after the 2016 election, as if it explains Trump's win in a way that has you laughing through your tears. But this isn't Knope's final word on the matter.

Unpredictability and insanity may be true, but that won't stop her from putting back on her pantsuit and getting out there once again to fight for those little girls who need a better example or those who feel Trump doesn't speak to their values. She's advising us all to do the same.

"I acknowledge that Donald Trump is the President. I understand, intellectually, that he won the election. But I do not accept that our country has descended into the hatred-swirled slop pile that he lives in... We figure out how to fight back, and do good in this infuriating world that constantly wants to bend toward the bad. And we will be kind to each other, and supportive of each other’s ideas, and we will do literally anything but accept this as our fate."

As Knope, a real Hillary Clinton-style go-getter, showed us on Parks and Recreation, she doesn't just sit back and let things happen, she gets involved. She is one nasty woman who fights in earnest for those who need a voice in hopes of making this world fairer and better. Her grieving process included a whole lot of hot chocolate and back rubs, but maybe what the rest of us need is to watch these 16 episodes of Parks and Recreation, and remember that America is really great when we all work together.

Leslie marries two male penguins without knowing it and becomes an LGBT hero and a pariah to the town's conservative party. It's how Leslie handles all of this that proves politicians, when not giving their talking points, are actually human beings. Democrats and Republicans take note.

Leslie loses the Woman of the Year prize to, wait for it, Ron Swanson. The irony should sting a little, but the two team up to take down the I.O.W. (Indiana Organization of Women) by throwing their award back at them.

Leslie Knope will do anything for her town, even take way too much cold medicine so she can give a speech that starts out the ramblings of a medicine head, but soon becomes a confident speech that proves she loves her town. And waffles. She really loves waffles.

If there's one thing Leslie doesn't like, it's Eagleton, Pawnee's upper class rival. And she really doesn't like that Eagleton just built a fence around a park to keep Pawnee residents out — which is very culturally relevant. According to Wired, the Parks and Rec episode was actually based on El Segundo, California, and the "resentments that have long boiled between the small, Mayberry-esque El Segundo and its wealthier neighbor to the south, Manhattan Beach."

Allowing yourself to grieve is important — even when it's over a miniature horse. Unlike, Ben Wyatt, I totally get why Li'l Sebastian was so beloved, and I also like seeing a whole town come together for their love of one tiny horse. I also wouldn't mind playing MouseRat's "5000 Candles In The Wind" on repeat.

Leslie is all for gender-equality and pushes her beloved Pawnee Goddesses to do everything boys can do, but better. It turns out, though, that the boys would prefer to be Goddesses rather than be apart of the Boy Scout-like Rangers, which forces Leslie to learn a lesson of her own. Added bonus: Donna and Tom are asking everyone to "treat yo self", and we will do just that by watching this episode.

Everyone loves a comeback, especially when it's set to Gloria Estefan's "Get On Your Feet."

Leslie Knope goes up against the incompetent Bobby Newport in a debate that has him saying nothing, but it's everything the voters want to hear. It may seem a little too real after this latest election, but it will always be funny. It's Knope's West Wing-style speech at the end that will have you crying happy tears.

It's Election Day in Pawnee and Leslie is waiting to see if she can pull out a victory against Bobby Newport. Spoiler: this is the way many of us hoped the 2016 election would end, so there's no shame if you ended up watching the last minutes of this episode in tears.

Watch the show's best couple, Leslie and Ann, fight to keep the town's fast food chain Paunchburger from selling small 64 oz. sodas and child size sodas roughly the size of a child. Once again, Leslie will do what is right by the people, even if it puts her job in jeopardy.

Watching Leslie meet Joe Biden after talking about winning the presidency in 2024 is enough to get you excited about politics. But it's the fight between Leslie and April over what should be done with a plot of land that will get you excited about government discourse. Turns out that we can fight, disagree, and end up coming to a compromise. Who knew?

Leslie Knope takes on her small-town's old fashioned views on women and what they can do by taking a job as a sanitation worker. Of course, the men working for the garbage department think it's funny to try and break her down, but they don't know Leslie, who finds a lady friendly way to move that garbage right out of town.

Patton Oswalt's Star Wars filibuster to stop Pawnee from getting rid of "Ted Party Day" is what stands out. But what we shouldn't forget is this episode was all about hearing those voices that don't always get a chance to speak.

We don't have to think the same way to get along. Just look at Leslie and Ron, the latter of whom is a staunch meat-loving libertarian who may not believe in government, but does believe in Leslie Knope. In this episode, though, these two besties are having some friendship problems. Basically, they're enemies, and in this episode we find out why. It's going to make you feel all warm and fuzzy inside to see these two work it out.

Once again, Parks & Rec takes on gender roles with this episode that has Leslie refusing to make a pie to help Ben get elected. It's a nod to the 1992 election when Hillary Clinton said she could "stayed home, baked cookies and had teas" but decided to work instead. Can you guess how the town reacted to all this? Pretty much how America reacted all those years ago.

Besides hinting that Leslie is probably POTUS, it also lays out the whole point of the show. “When we worked here together, we fought, scratched, and clawed to make people’s lives a tiny bit better," she says. "That’s what public service is all about: small incremental change every day.” Let's never forget that.

What would Leslie Knope do? In her letter to America, she makes it clear, she will never give up. It's something we see time and time again in these episodes, which focus on a town coming together and a government doing what's right for the many and not the few.