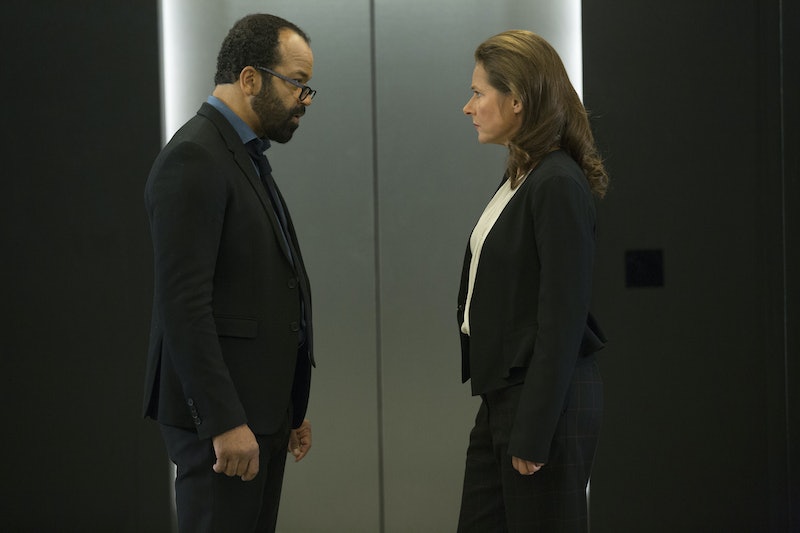 Spoilers for the Nov. 13 episode of Westworld ahead. Ever since the premiere of HBO's Westworld, fans have been wondering whether one of the human characters would actually turn out to be a robot in disguise. The hypothesis makes sense; after all, this is a world in which androids have become so lifelike that they're virtually indistinguishable from humans, inside and out. Different fans had different theories as to which character would be the secret robot (my money was on Luke Hemsworth's security chief Stubbs), but this week's episode, "Trompe L'Oeil," revealed the truth: Bernard is a host on Westworld . And, as if this massive twist alone wasn't shocking enough, it came at the expense of one of his coworker's lives.

Last week, Bernard and Elsie discovered that Quality Assurance head Theresa Cullen was the one behind the data smuggling. This week, Theresa revealed that she was actually smuggling the data to Delos itself, so that Dr. Ford wouldn't be the only one in possession of it when the corporation moved to oust him from his position in the park. In light of this revelation, Bernard decided to come clean to Theresa and reveal to her the truth of what Ford has been up to in Sector 17 — playing house with a fake family of robots.

We got our first real hint that something was up with Bernard when he explained that none of the hosts had reported the existence of the house because they were literally programmed not to see it. When they went inside, Theresa asked, "What's inside this door?" Bernard responded, "What door?" even though he had just looked right at it. The door in question led to the cellar, where Ford had set up a makeshift lab where he'd been manufacturing his own hosts without telling anyone. Theresa picked up a handful of blueprints off a nearby desk, which included sketches of Dolores, Young Ford… and Bernard. "It doesn't look like anything to me," the programmer said of his own blueprint.

Yes, Bernard is indeed a host who has been "loyal" to Ford for "many years." His estranged wife and dead child? Backstory manufactured by Ford. His affair with Theresa? Super creepy in hindsight. At least Theresa was comforted to know that Bernard wasn't completely under Ford's control, since he apparently exposed his creator's secret lab against his wishes. But even that turned out to be a lie; Ford had ordered Bernard to bring her there, to the hidden basement of an off-the-grid house in a secluded sector of the park… so he could kill her for her betrayal. With a flick of his finger, he dispatched Bernard to beat a shocked, terrified Theresa to death with a few brutal blows — and so the park officially has its first recorded incident of a host killing a human being. It was a horrific way for Theresa to go, and surely not the last death at the hands of a host we'll see on Westworld.