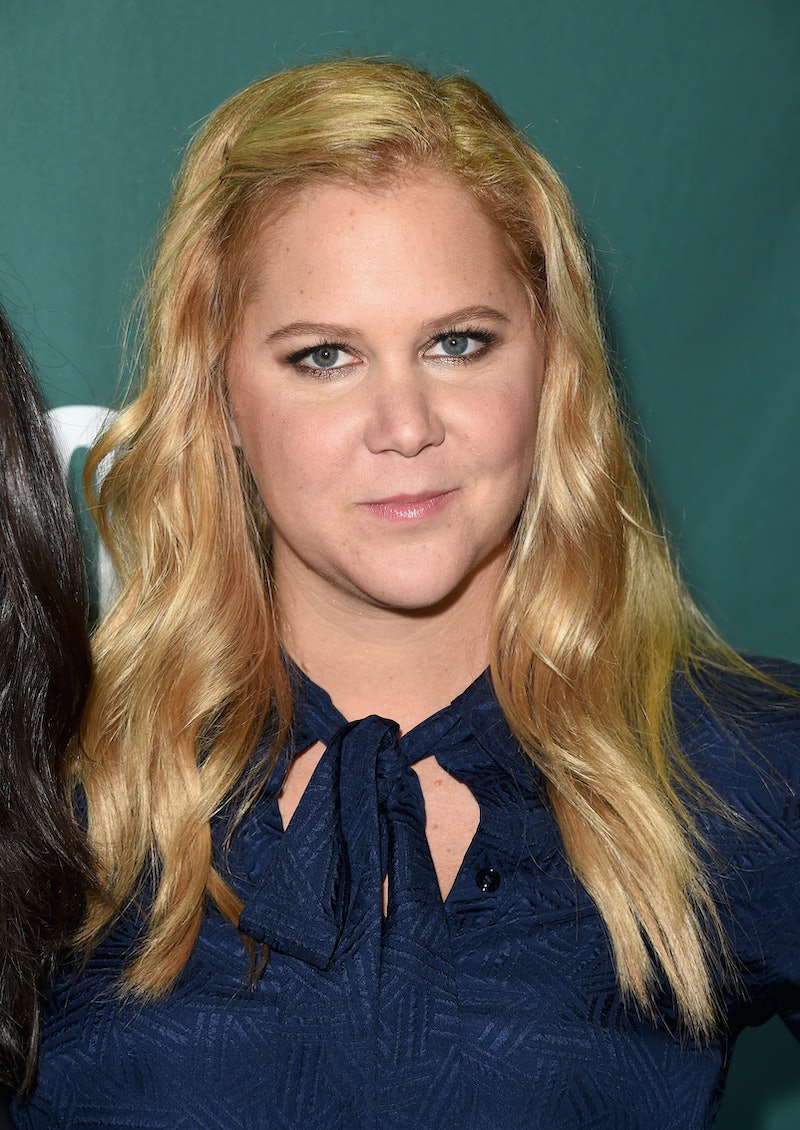 "If (insert presidential candidate here) wins, I'm leaving the country." It's something we've probably all said at some point during the incredibly tense 2016 election cycle, right? But apparently, if a celebrity says it, they're supposed to keep their word — even if they were joking just like the rest of us were — and Amy Schumer is among them. She won't be leaving the U.S. now that Donald Trump is the president-elect, and the backlash she's receiving because of it is unreal. On Wednesday, Schumer responded to those calling her out for being anti-Trump in a lengthy statement, and she definitely doesn't deserve all the hate she's received.

In an interview with British news outlet New Music Express from September, Schumer claimed that a Trump presidency would be enough to drive her out of the country. She said, "My act will change because I’ll need to learn to speak Spanish because I will move to Spain, or somewhere. It’s beyond my comprehension if Trump won. It’s too crazy." Now that her fears have become a reality, though, she's clearly not leaving, and after receiving all kinds of angry and hateful messages in the hours that have passed since Tuesday's election, she's making her stance clear via a post she made on Instagram.

First of all the interview where I said I would move was in London and was said in jest. Not that anyone needs more than a headline to count something as official news. Anyone saying to pack our bags is just as disgusting as anyone who voted for this racist homophobic openly disrespectful woman abuser.

(Regarding the "woman abuser" claim, though many claim the Access Hollywood tape featured Trump bragging about committing sexual assault, Trump has denied those allegations.)

Schumer was clearly joking when she said she'd leave the U.S. — just like I was when, at some point in the recent past, I'm sure I said something similar about what I would do if Trump became president. She tells jokes for a living, and joking about this election has been part of that. How could anyone hold her to a statement she made that was obviously not meant to be taken seriously?

And the amount of hate she's received for that simple statement is so crazy. Don't believe me? Search her name on Twitter, and watch the tweets that appear, offering to buy her a plane ticket so she can leave the U.S. faster, or even mocking her appearance and weight. One person even tweeted that she's a "filthy degenerate Jewish pig," which is obviously incredibly out of line. It isn't fair to her, and it isn't right — especially when so many of these comments are meant to hit below the belt.

Just because she's a celebrity, people don't have a free pass to be as rude to her as they want to. Bullying is not OK or acceptable — not on Twitter or anywhere else, and not toward anyone. It's good to see that Schumer recognizes the hate for what it is and isn't welcoming any more of it, especially since she turned off the comments to her Instagram post. Schumer isn't leaving, and I'm glad she's not, because I have a feeling she can make the country a better place and keep us laughing at a time when we all really, really need to laugh.

And for those of you who feel the same way Schumer does, she ended her post with another good point: "Today we grieve, tomorrow we begin again." Let's begin again... and leave all that hate behind.