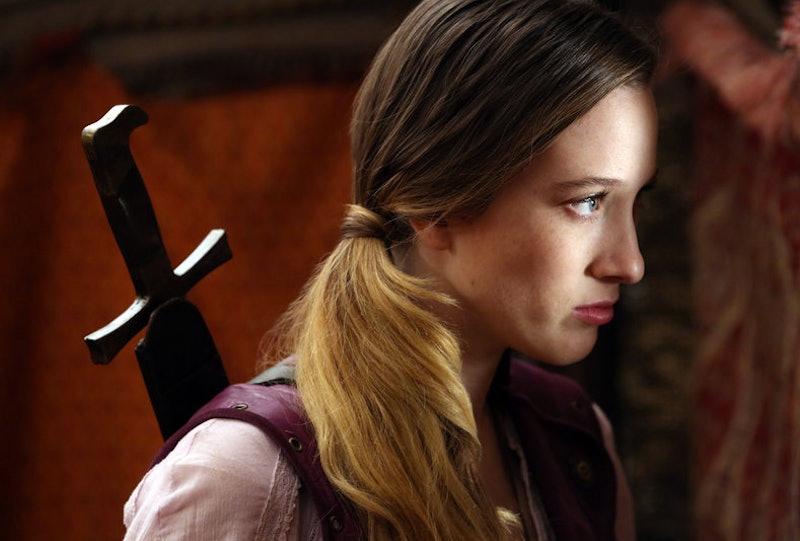 It's official. Once Upon a Time in Wonderland has been canceled after only 13 episodes. The miniseries was advertised as a miniseries before the first episode even aired, but that doesn't mean that there wasn't the hope of doing more than just one season. This is Hollywood, after all. There's no such thing as one season without a cancellation notice. It was obvious from the get-go that Once Upon a Time in Wonderland was never going to do as well as its parent series. It premiered to low ratings, aired to low ratings, and has been canceled due to low ratings despite a highly publicized guest appearance by Barbara Hershey in Thursday night's episode.

How did a show with such promise fail to resonate with audiences? It had everything that Once Upon a Time had and lacked everything that made Once Upon a Time convoluted and occasionally hard to follow. It featured a decidedly less passive version of a beloved storybook character, in true Once style, and the damsel in distress on this show was none other than her prince charming, rather than the other way around. And, best of all, there was absolutely no love triangles to be found. What went wrong?

One of the best and worst things about Once Upon a Time is its emphasis on true love. True love can break any curse, overcome any obstacle, and even give you super powers if you're the product of it. Once Upon a Time has a lot of true love couples, including Snow White and Prince Charming as the couple that kicked off the whole plot, but, shockingly enough, love is not the focus of this fairy tale. Once Upon a Time in Wonderland made true love the entire focus on the premise. The pilot begins with Alice in an insane asylum and by the end of it she has proven that she was easily able to break out of it at any time. What propelled her to finally do it? Finding out that her true love, Cyrus, is alive and in danger. I understand that she was grieving a love lost, but come on. She was about to let some doctor mess around with her memories, which, in Victorian times, means a lobotomy was in her future.

Not that Emma Swan from Once Upon a Time was any better. She would likely still have been spending her birthdays alone if her son Henry hadn't run away from home and crossed state lines just to drag her to Storybrooke. But as easy as it is to admire Alice for her determination, and Once Upon a Time in Wonderland for turning the rescue romance on its head, the fact still remains that Alice's introduction to the plot has been done quite a lot already, while Emma's introduction was a new variation on the reluctant hero theme. There's nothing wrong with romance, but the one between Alice and Cyrus was stretched out for so long that by the time they were reunited, half the fanbase was hoping for her to get with the Knave of Hearts instead.

Then there were the villains. Taking the place of the Evil Queen and Rumplestiltskin was the Red Queen and Jafar, their relationship more or less as complicated and vitriolic as the characters they were imitating. And that's just what they felt like: an imitation. Once Upon a Time had struck gold writing villains with three dimensions, dark pasts, and compelling reasons for being the people they are today, but Once Upon a Time in Wonderland's attempt to do the same thing basically screamed copycat. The numerous comparisons that could be drawn between the Red Queen and the Evil Queen, and between Rumplestiltskin and Jafar, distracted from their character development.

Once Upon a Time in Wonderland did a lot of things right. Alice was a fantastic heroine, brave, stubborn, flawed, and fierce. Her friendship with the Knave of Hearts was well-written and poignant and her romance with Cyrus eventually won people over when it was properly explored later in the season. By then, however, it was too little too late to get the last five people still watching to care.