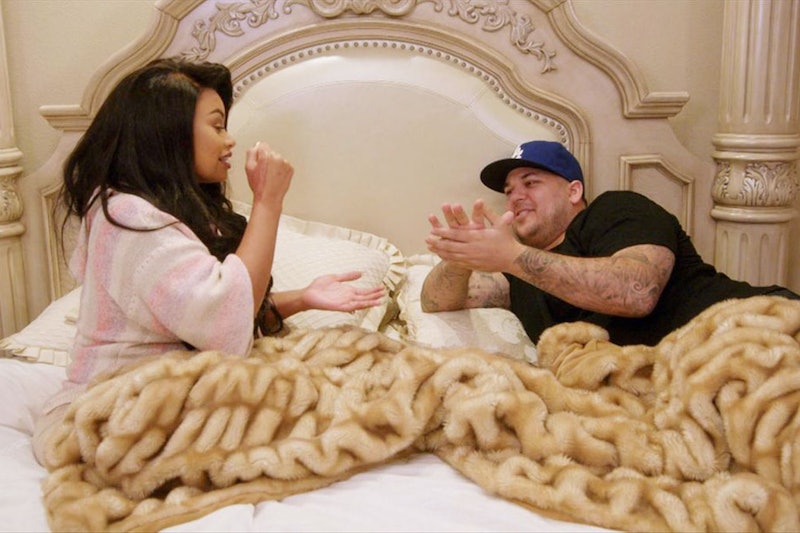 On Wednesday morning, I woke up, grabbed my phone, and found out that Donald Trump winning the election wasn't a dream. I spent the rest of the day working, crying, stress eating, and crying some more when I thought about having to eventually talk to my parents about this — which would, inevitably, make me cry all over again. But, also on Wednesday, I watched the most recent episode of Keeping Up With the Kardashians. If you're one of the millions of people who is, to put it lightly, not happy with the election results, taking a moment to yourself is important right now. My choice way to relax was to watch KUWTK, order dinner, and paint my nails. The affair was book-ended by more tears, but, for a while, I got to step away into the land of Health Nut salads, Scott Disick milking his screen time for all it's worth, and a guest appearance from "the morally corrupt Faye Resnick." I got to disappear into this world once again on Thursday, when Rob Kardashian and Blac Chyna's daughter, Dream Renee Kardashian, was born, allowing me and tons of other Kardashian fans a much-need means of escape.

My job involves covering celebrity news, but it's not always as light as you might think. Celebrities do really awful things sometimes. Sometimes, they even become president, and it takes over your entire week of work. (And also your entire next four years of regular life. God help us.) So, in the moments where the news is light (Someone gets married! A baby enters the world! Adele sings Spice Girls in a car!), it can be a relief.

But with Dream Kardashian, it was more than that. I needed a break, not just from the daily grind, but from the hard and emotional and confusing and scary time following the election. And I know many other people did too: As of Thursday afternoon "Dream Kardashian" was trending on Twitter above any election trends.

For people who follow celebrity news, Kardashian and Chyna having a baby is a story that we've been following for months. There have been updates on Instagram, drama with Kardashian's famous family members, an entire series on E!. I would never suggest that we place the burden of lightening the mood in this country on a baby who was born only a few hours ago, but this is not about the baby. This is about "Dream Kardashian" the idea, the story that her parents have intentionally drawn us into. Kardashian and Chyna want to be talked about; otherwise, they wouldn't have a TV show and public social media accounts on which they post intimate details of their personal lives. They have made themselves into a form of escapism — as has the entire Kardashian family — and I'm welcoming that with open arms right now.

Even more so than following news like Dream's birth online, Keeping Up With the Kardashians, the show, is the perfect way to relax. Every episode starts with two or three conundrums, which, by the end of the hour, are solved (barring the rare "To be continued...").

On the most recent KUWTK, the one I watched post-election, Kim Kardashian and Kendall Jenner worked on their issues with anxiety (yep, it was a really relevant storyline), and, by the time the show ended, Kim felt better about remaining calm while driving on Los Angeles highways, and Jenner learned that meditation was a good tactic for her. At the beginning of this same episode, Disick started hanging out with Kris Jenner's friends, then felt conflicted about his place among them, then realized that bonding with 60-year-olds was a positive thing for him. Seeing someone go from having a problem to fixing that problem in an hour flat is escapist TV perfected, because watching someone solve their issues (whether they're real or produced) fills your with a sense of release.

I know that people hate that the Kardashians are rich and constantly talked about even though they're "talentless," but, honestly, I don't want to think about that right now. There have been many times over the past two days where I haven't wanted to think about anything. But talking about Kardashian and Chyna having a baby is easy: "Great name! Love it!" or "Not a fan! Should've gone with Khyrob!" Dream Kardashian allows us to have a discussion about something that doesn't have any real effect on our lives. And, during a week where I and many others have sat around pondering the myriad ways Trump's presidency could effect our lives, it's a big effing relief.