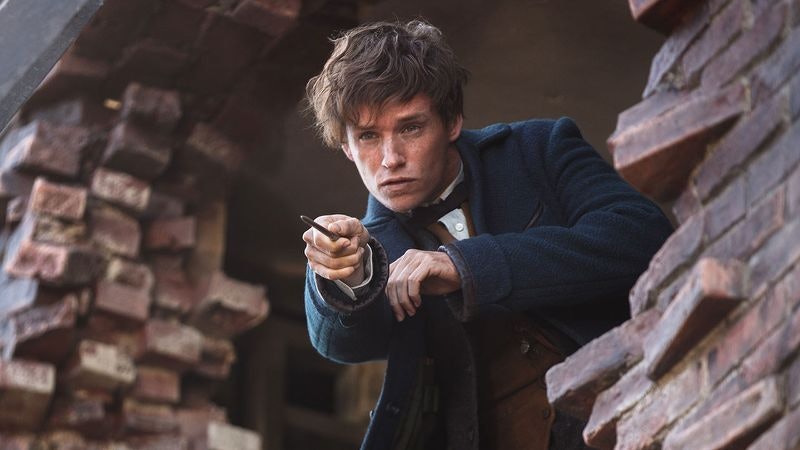 The new film Fantastic Beasts and Where to Find Them stars Eddie Redmayne as Newt Scamander, a wizard and magizoologist from Hogwarts who travels to New York City in 1926 with a case of magical creatures — creatures who soon escape. Scamander is the main protagonist of the film, which is to be the first of a five movie franchise, but is Newt the star of all five Fantastic Beasts movies? Spoilers ahead!

It remains to be seen just how much of a role Newt, and thus Redmayne, will play in the franchise moving forward. He's not going anywhere, and he will definitely have a part to play, but his role could be reduced in future installments. That's because the main focus of the franchise is going to be on the looming threat of the dark wizard Grindelwald; a man who only briefly cameos in Fantastic Beasts. And while Newt is expected to be one of the main characters opposing Grindelwald, he may not be the most prominent. Hardcore Harry Potter fans know that it is Dumbledore who ultimately defeats Grindelwald, and casting is already underway for the character, who is set to debut in the franchise's next film.

By the sound of things, the next four movies could consist of more of an ensemble cast, where Newt isn't really any more important than other characters. In other words, he's no Harry Potter. In Warner Bros.' recent statement on the sequel, the studio said it "moves deeper into an increasingly dark time for the wizarding world, where Newt and our other heroes have to decide on their allegiances," according to Variety. Those other heroes include Dumbledore, muggle Jacob Kowalski, and sisters Queenie and Tina Goldstein. Also figuring to play a larger role moving forward is Ezra Miller's Credence Barebone, whom some fans believe is secretly Voldemort's father. "Credence, we follow Credence further," director David Yates told The Leaky Cauldron. "He becomes quite pivotal actually, Credence is quite crucial."

Yates also revealed in the same interview that the second film in the franchise takes place in an entirely different setting, moving the action from New York to the UK and Paris. Along with that, and a new focus on Grindelwald, Dumbledore, and Credence, there will be even more characters added to the mix as the scope of the franchise expands and moves away from Newt and the first movie. "We’ve seen the script for Part 2, for the second movie, which takes the story in a whole new direction — as you should, you don’t want to repeat yourself," the director told EW. "The second movie introduces new characters as [J.K. Rowling] builds this part of the Harry Potter universe further. It's a very interesting development from where we start out."

With the focus shifting to other characters in future installments, it seems like Newt Scamander will be less of the main protagonist in future movies compared to Fantastic Beasts and Where to Find Them. He'll still have a big part to play, though just how big that part will be is not yet known.