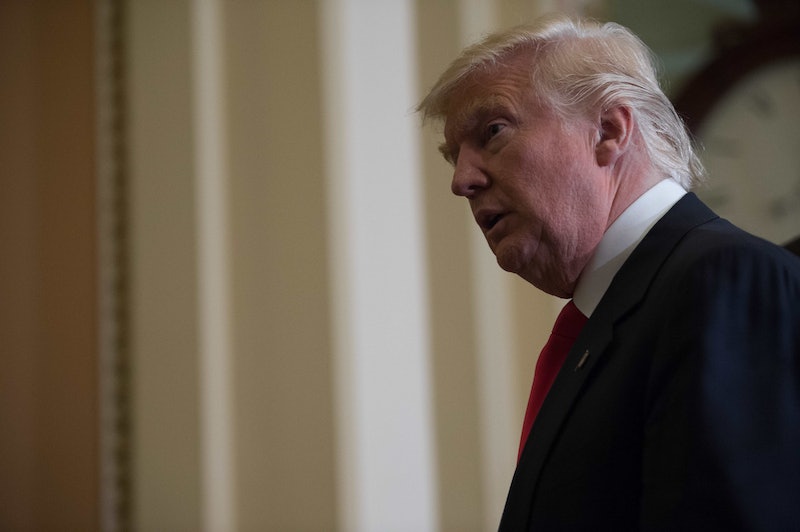 As it became clear that Donald Trump had pulled off a victory that shocked the world on Tuesday night, Americans — especially women and people of color — had many questions. If you can get pregnant, chief among them was undoubtedly whether it will be harder to get an IUD when Donald Trump is president. According to ABC News, Google searches for long-acting birth control methods spiked in the hours after the presidential election was called in Trump's favor, and thousands of women advised each other on social media to seek out IUDs before the Republican president elect takes office in January.

The concern stems from the possibility that Trump, and the Republican-controlled Congress that stands behind him, will take actions that restrict women's access to health care. During his campaign, he promised repeatedly to repeal the Affordable Care Act, which requires insurance companies to offer birth control without a copay, and to appoint Supreme Court justices who would reverse Roe vs. Wade. Whether or not his efforts are totally successful, women's health is likely to undergo a major change during Trump's presidency.

That's where IUDs come in. After Trump was declared the victor of the presidential race, many women pointed out that the qualities that make IUDs one of the most highly recommended forms of birth control also make them ideal for outlasting a conservative presidency: IUDs are reversible, meaning they shouldn't affect fertility after removal, and most importantly, they last anywhere from three to 10 years after insertion. Ideally, a woman could get an IUD at low cost under the Affordable Care Act and not have to worry about affording birth control under the upcoming Trump administration. (Out of pocket, an IUD insertion can cost up to $1,000.)

But is all the concern warranted? Trump is notoriously unpredictable, but unfortunately, his administration could prove disastrous for women's health. Not only do women have to worry about the president-elect and a running mate who vowed to consign Roe vs. Wade "to the ash heap of history where it belongs," but also the weight of a Republican Congress behind them — not to mention the likelihood of a conservative Supreme Court as well.

According to NPR, Trump may have difficulty repealing the Affordable Care Act in its entirety. Democrats are likely to filibuster any attempts to repeal the law, and 60 votes are required in the Senate to overcome a filibuster. However, it's likely that he will make small legislative changes and influence regulations to shape the law into something more conservative. Another possibility is that he could simply refuse to fund Affordable Care. It's also worth noting that Trump has consistently threatened to defund Planned Parenthood, which provides IUDs at low cost to women across the country, and he just might succeed.

So, will it actually be harder to get an IUD after President Obama leaves office? If you're covered under the Affordable Care Act or depend on Planned Parenthood as your health care provider, the answer could very well be yes. The good news is that Obama is still POTUS until Jan. 20, so if you're worried about the future of your right to health care, there's still time to consider long-acting contraceptives like an IUD or the birth control implant, which lasts up to four years. It would be one less thing to worry about, and something tells me there will be plenty of fodder for anxiety over the next four years.