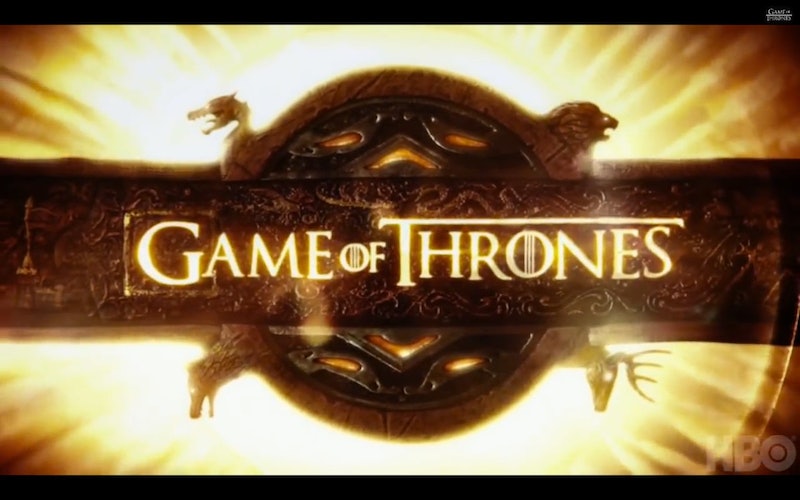 As we all know, nothing is forever in Westeros (especially, like, the life of ANYONE who lives there)...until now. Jewelry behemoth DeBeers just released a jewelry line that Game of Thrones fans will love, so you now have the opportunity to give your loved one that gift of the Seven Kingdoms...for a cool $25,000. Maybe you can even attempt to say "I Do" for your very own Red Wedding!

Wait a second. Don't do that.

Okay, so these aren't Stark-themed engagement or wedding ring, but DeBeers offers eight medallions as a part of the Talisman Collection.

So does this mean I can get the medallion for getting a hand chopped off? Unfortunately, no — they're not that specific, nor are they inspired by the show; they capture the aesthetic of Game of Thrones, and the medallions share themes with the super popular HBO show, which shoots out head first (beheaded first? Haha!) for its fourth season on April 6. Each of the eight medallions is a specific theme, and we've got: Bravery, Hope, Inner Peace, Love, Wisdom, Honor, Loyalty, and Strength. In other words, we've got very expensive versions of those spirit beads you bought at Claire's in 2000. For $25,000, you ought to get a dragon or two with that necklace!

But wait! These are not just diamonds, these are rough diamonds, which the company says make this collection a true novelty. Their words: "What was once the exclusive privilege of kings and queens of the Middle Ages, rough diamonds are brought to life in this iconic collection." Further, diehard fans will be able to get their hands on the jewelry that Cersei would have really worn.

So, for all of you with extravagant, ostentatious, GoT loving significant others, here's your golden (er, diamond) opportunity of a gift for next Christmas! But if you had a cool $25,000 to drop on a GoT fan...would you really get him or her a diamond necklace?

I'm just waiting for a GoT-esque Ikea line, where you can build your own Iron Throne.

Take a look at some of these medallions from the line:

Update: A representative for DeBeers says the jewelry line was not directly inspired by Game of Thrones, as previously suggested in an earlier version of this piece.